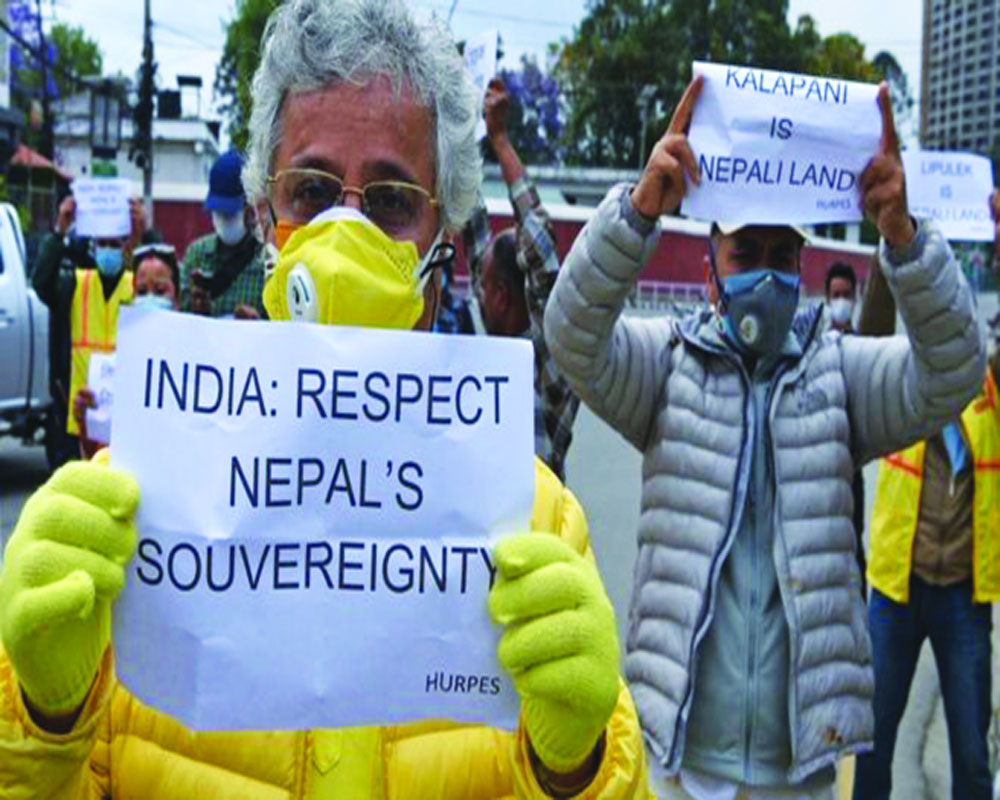 Whenever India stands up to Chinese bullying, Beijing unleashes our neighbours to open up new fronts. Nepal’s new map is one such attack on our armed forces inside the cantonment

In an unprecedented move, the Nepal Constitution passed an amendment Bill on June 13 to “update its new political map,” laying claim to India’s Lipulekh, Kalapani and Limpiyadhura as its territories. This isn’t good news either for the diplomats or the defence establishment in New Delhi. What’s certain is that they will have to re-visit the status quo prevailing in our ties, start afresh and contemplate traditional diplomacy. The matter is more serious than it has ever been because Nepal’s geography juts into the Indian heartland and also into the two highly vulnerable yet vital, volatile flanks. This could instantly affect the one crore plus Nepalese diaspora in India and lakhs of Indians in the Himalayan State, who may fall prey to a potential crossfire of geo-economic-political and strategic “Great Game.”

Undeniably, Nepal’s move to amend laws has multiplied security problems for India, especially as the crisis has emerged from a small yet traditionally fraternal neighbour. A country of 30 million people has put India’s 1.3 billion citizens into a tizzy. Whatever may be the outcome (hopefully satisfactory) of the present crisis, short-term damage has definitely been inflicted on the centuries-old friendly relationship between the two nations. A perilous 21st century “Great Game” in the South Asian region awaits an uncharted and unpredictable journey.

Contextually though, it can be argued that bilateral irritants, differences, disagreements and disputes are nothing new for any country, including those in South Asia. Yet the scenario today is graver than any other (past) normal “crisis.” It’s absolutely certain that the third country, China, is in play, which is adept in unconventional rather than conventional warfare. It has played a major role in the scheme of things (like in the past), affecting India-Nepal ties. To this author, the aim is to inflict major damage to the Indian armed forces.

In light of this, India must make every effort to pre-empt any possible or impossible fallout in its regiment of Gorkha Rifles, a chunk of whose soldiers are recruited from Nepal’s high Himalayan terrain. No doubt, Indian defence forces are very well organised, built as they are on solid foundations thanks to the British rulers’ ability to make it an apolitical and (top-class) professional fighting machine. Nevertheless, certain critical events of history need to be revisited. There’s a need to learn from past experiences to tackle any future eventuality. All of it started post the First War of Independence in 1857,  when Indian soldiers rose up against their British commanders. The British constituted a new commission to look into all parameters of military administration so as to maintain discipline, quality and professionalism thereof. True, their ultimate goal was self-preservation of their empire and London’s self-interest. This at the expense of the subjugated Indian subjects.

However, what the British were really scared of most was large-scale mutiny in the military owing to several fault-lines in India’s fragile social system, especially in recruit catchment areas. The British feared en mass contamination of the paltan in the platoon, like the present-day China-origin virus that has contaminated India. Nevertheless, except for a few instances of small resentment and sundry cause of dissatisfactions in the barracks, the British Indian Army did remarkably well and didn’t face any mass scale revolt till 1946. They kept strict vigil to avoid any political discourse in the officer’s mess, discouraged all acts of religious lunacy and managed the caste/language faultlines rather well. Little wonder then that millions of Indians from the rural belt and officers from preferred “background” served them with great elan, thereby ensuring two world war victories to the British monarchy.

Contextually, therefore, few salient features of soldiering now need to be revisited. The house/village of the soldier must preferably be politically uncontaminated and peaceful. A frontline soldier can never give his best with an oscillating mind, fluctuating between uncertainties in two fronts: Guns of the enemy in front and goons in his estate in the rear. Second, hurt religious feelings led to the mutiny of 1857 during the military rule by London’s clueless commercial company. Again, when the political clarion call for India’s freedom from the British reached the catchment areas of soldier recruitment and barracks, mass spontaneous revolt of the men in uniform could not be aborted in 1946.

One, therefore, sincerely hopes that the present “enlarged” territory of Nepal doesn’t transform a benign personal thought into an uncontrollable passion. An emotive issue must not be allowed to break the balance or professionalism of the Gurkha Brigades of the Indian garrison.

That’s because no sensitive soldier, however loyal and disciplined he may be, under extreme tension — created by indigenous political, populist and demagogues’ reckless call to the sons of the soil to rise and protect the image, prestige, honour and self-respect of his “motherland”/territory and soil of the family — can control himself beyond a point. He’s bound to cave in at the spur of the moment though.

It needs no rocket science to state the obvious. The seeds of the present India-Nepal tension have not been sown in the foothills of the south of the Himalayas but somewhere else. Across the north-east of the Himalayas to be precise. And conviction compels one to revisit the August 2009 essay written by Zhan Lue of a Beijing think-tank. “China should break India into 20-30 states.” Using highly venomous and toxic semantics, he openly stated that “if China takes a little action, the so-called Great Indian Federation can be broken up with the help and support of friendly countries like Pakistan, Nepal, Bhutan and Bangladesh.”

Ironically, these aggressive words appear to have become China’s standard operating procedure to cajole and compel all in the vicinity to kow-tow to Beijing, especially since Xi Jinping became the strong man of the Hans to reverse the role of his country’s “ignominious history of 110 years.” Abnormal and absurd territorial, technology and trade demands of the Hans have already upset the West. Whenever India tries to stand up to Chinese bullying, Beijing unleashes our neighbours to open up new fronts. Nepal’s new map certainly is one such attack that aims to damage the Indian armed forces deep inside the cantonment.

The Hans have gone berserk. Their “Great Game”, consisting of the Belt and Road Initiative and the China–Pakistan Economic Corridor, faces all-round challenges.

The contagion has further stymied China’s growth engine. All-round lockdowns have led to largescale unemployment across the world. The closure of air and sea routes has battered international trade, technology and tourism. Hence, a desperate “strategic indirect approach” to fix India’s vulnerable heartland. India must counter to ensure the safety and security of its soldiers, the State and society. At least, we should wake up now.

(The writer is an alumnus, National Defence College)