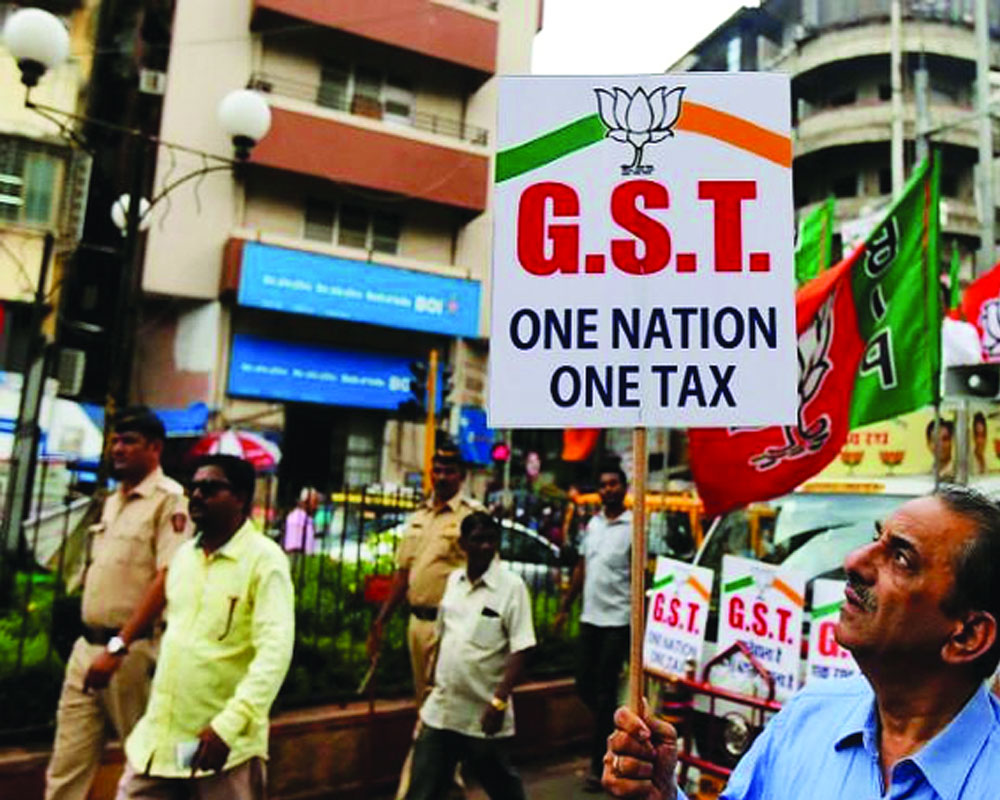 The Centre and States must try to fix all void in GST implementation to achieve buoyancy in tax revenue, thereby obviating the need for continuing with the compensation mechanism

Faced with a dwindling tax revenue since the last financial year of 2019-20, the issue of “full” and “timely” compensation for the shortfall in States’ tax revenue (their own collection plus the amount received as their share in indirect tax collected by the Centre as per the Finance Commission’s devolution formula) vis-à-vis a given benchmark, has been a bone of contention between the Centre and the States. It has acquired gargantuan dimensions during the current year with the Coronavirus pandemic forcing a collapse of businesses, cutting across almost all sectors (barring essential items) and in turn, leading to a steep fall in tax collection of both the Centre and States. During 2020-21, the gap between what can be arranged from a tax pool and compensation requirement of the States is estimated to be Rs 2,35,000 crore (during 2019-20, this was Rs 70,000 crore). The compensation to States is intertwined with the Goods and Services Tax (GST) in vogue since July 1, 2017. The GST Compensation Act, 2017 provides for compensation to the States for five years (2017-18 to 2021-22) for the loss of revenue to be calculated as the difference between their actual collection (including transfer of their share in indirect tax collected by the Centre) and the amount they would have got with annual growth at 14 per cent over the 2015-16 level under the erstwhile dispensation (Central Excise Duty (CED)/service tax/sales tax/Value Added Tax (VAT) plus other local taxes).

To ensure this, the Union Government had also passed an amendment to the GST Compensation Act (2018) to levy a cess on the supply of certain goods and services. The cess is levied on demerit goods (those which fall in the highest tax slab of 28 per cent — other slabs being five per cent, 12 per cent and 18 per cent besides the exempt category) such as automobiles, tobacco, drinks and so on with a proviso to use the proceeds for compensating States. The cess was to remain in force for five years in sync with the Centre’s obligation to compensate States for that period. The rationale behind keeping these arrangements in place for five years was that at the end of this transition i.e. 2021-22, the GST dispensation would have acquired the much-needed “vitality” and “resilience” to yield sufficient resources for the States  to meet their budgetary requirements within a prudential limit set under the Fiscal Responsibility and Budget Management Act (FRBM) thereby obviating the need for any extra support beyond 2021-22.

During the current year, against compensation requirement of Rs 3,00,000 crore, cess proceeds are estimated to be about Rs 65,000 crore leading to a shortfall of Rs 2,35,000 crore. In this backdrop and with the States unwilling to relent on their claim for compensation in full, the Centre is talking of what in legal jargon is termed as force majeure (unexpected circumstances). Put simply, the latter has expressed its inability to pay invoking an event beyond control or what the Finance Minister, Nirmala Sitharaman, has described as an “act of God” (the Coronavirus).

The issue was discussed during a marathon meeting of the GST Council on August 27, 2020. Ruling out a hike in tax rates or the Centre making good the shortfall from either the Consolidated Fund of India (CFI) or borrowing against its balance sheet, Sitharaman presented two options for consideration by the States.

Under option one the Centre, in consultation with the Reserve Bank of India (RBI), will provide a special window to the States to borrow Rs 97,000 crore (this is the amount attributable to implementation of the GST, while the rest is apportioned to the pandemic — as informed by the Revenue Secretary, Ajay Bhushan Pandey) at a “reasonable” rate of interest. The loan won’t be treated as debt in the books of the State Governments and will be amortised (both principal and interest) from the cess collection. An additional FRBM limit of 0.5 per cent of State Gross Domestic Product (SGDP) will be allowed.

Under option two, the States will borrow the entire GST compensation gap of Rs 2,35,000 crore (including Covid-19 impact portion) from the market. The collection from the cess will only pay for the principal amount. As regards the borrowing treatment, only an amount up to Rs 97,000 crore won’t be treated as debt. No additional FRBM limit is allowed under this option.

The GST Council also decided that the above borrowing arrangement would be for the current fiscal and a review would be done at the beginning of the next financial year.

By putting the above options, the Union Government has made four things abundantly clear. One, it is not legally bound to pay the compensation when there is no money in the cess pool; second, it won’t borrow on its balance sheet but is willing to help States raise a loan; third it does not want the tax pool to fully cover the cost of servicing the loan and fourth, the cess on demerit products will continue beyond 2021-22. On option one, it can’t be faulted. The two provisions in law, namely one relating to compensation and the other levy of cess (and collection thereof) have to be viewed in conjunction with each other. In other words, the discharge of the constitutional obligation to compensate States for the loss of revenue would be possible only when there are enough funds available in the cess pool. Since the pool is denuded, the Centre is under no obligation to pay (this position is even confirmed by the Attorney-General). By the same logic, there is no case for it to borrow on its balance sheet and pay to the States.

Even so, going for it will have a catastrophic impact on its budgetary position. Already, the Centre has increased its borrowing programme from the budgeted level of around Rs 8,00,000 crore by 50 per cent to Rs 12,00,000 crore. This does not include Rs 90,000 crore towards additional allocation for MGNREGA and employment schemes for migrant labourers. Now, if it has to borrow Rs 2,35,000 crore to cover deficit in the cess pool, its total borrowings will gallop to Rs 15,25,000 crore or eight per cent of the GDP — more than twice the budgeted 3.5 per cent.

Apart from casting a shadow on India’s ability to protect its macro-economic fundamentals and inviting the wrath of rating agencies by way of downgrade, borrowing by the Centre on such a mammoth scale will crowd the market, harden yield and increase the cost of borrowing by States even for their normal borrowing programme (apart from making things difficult for the private sector).

In this backdrop, the proposal put forward by Sitharaman to help States raise loans at reasonable rates makes sense. However, disingenuous  bureaucrats in the Finance Ministry have designed the borrowing options in a manner so as to make it unviable for the States. Under option one, the loan will be available at low interest rate and there won’t be any burden of servicing on them but this covers only 40 per cent of the shortfall. So, they will be forced to think of option two.

Under this option, States can raise a loan for the full amount of the deficit i.e. Rs 2,35,000 crore but the Centre won’t facilitate this. They will have to borrow from the market at a higher rate. No additional FRBM limits for these borrowings will make them less credible, thereby adding to the cost of raising them. Adding salt to injury, States will have to bear interest cost from their own resources as the cess pool will only pay for the principal amount.

The Centre should stop this skullduggery. It makes no sense to make a distinction between a shortfall arising from the GST implementation or the pandemic. Whatever may be the cause, the fact remains, there will be deficit of Rs 2,35,000 crore in the cess pool and all of it needs to be addressed. The States should get to borrow this amount from the “special window” at a low interest rate and the cost of amortising it (principal plus interest) must be funded from the cess pool.

The cess on demerit products will have to continue beyond 2021-22 till such time the loan-related liabilities are fully cleared. However, this will require that States refrain from pursuing their demand — made before the 15th Finance Commission — for continuing with compensation for three more years (beyond 2021-22) as that will jeopardise the chances of servicing this loan. Meanwhile, both the Centre and States should endeavour to remove all void in GST implementation to achieve the desired buoyancy in tax revenue, thereby obviating the need for continuing with the compensation mechanism.