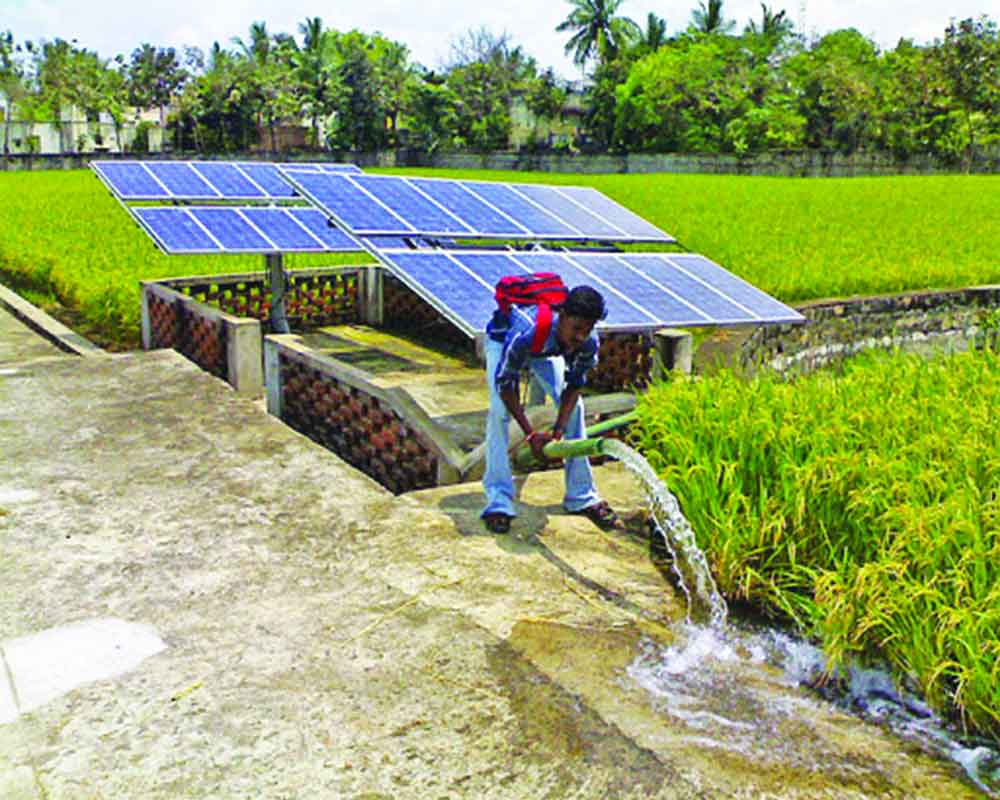 Blended finance combines public sector and philanthropic monies as catalytic capital to raise multiples of private sector monies, which help scale up the flow of funding to sustainable projects

As sustainability becomes mainstream, it is becoming a well-acknowledged fact that the planet just does not possess the resources required for us to maintain our current consumption patterns and emulate the aspirational lifestyles of the West. The estimated growth in global population to 10 billion in the not too distant future is an added headwind. This situation has meant that driving efficiencies in resource usage is fast coming into public discourse to reduce the carbon footprint. This is translating into necessary assets that would need funding. Such examples abound, like fuel-efficient cars, migration of public transport to e-vehicles, high-speed rail in place of airlines, urban Mass Rapid Transit trains substituting fuel-run vehicles, micro grids for far-flung communities instead of diesel generators and so on.

While these assets, which are typically part of large-scale transformational projects, are funded either by the Government or by concessional loans from development financial institutions, public capital is not going to fulfil the need for the trillions of dollars of investment the planet requires to scale up projects that would usher in the desired sustainability goals.

However, the biggest challenge to bringing  private capital at scale is the fact that most projects do not offer commercially-viable returns, owing to high upfront costs, long payback, remote location of some projects, nascent technologies and in certain cases, political uncertainties, weak institutional frameworks and so on.

This is where blended finance has come up as a solution in this context. It combines public sector and philanthropic monies as catalytic capital to raise multiples of private sector monies, which help scale up the flow of funding to sustainable projects, while yielding substantial economic benefits to all stakeholders.

The blended finance structure addresses the projects’ perceived risks, thereby helping increase the size and number of funding opportunities. It comprises funding, which may or may not be concessionary, supported with one or more elements like guarantees, political risk insurance, performance insurance, outcome-based funding, interest subvention, concessional or off-market local currency hedging, project preparation grants and so on.

This combination makes the projects’ terms viable for private sector capital and for the project developer, who otherwise may not have met the criteria without the assistance these supporting mechanisms bring in.

Among the emerging markets, India is leading the way by developing successful blended finance models. These are worth emulating in other markets that have a similar development profile as India in order to bring blended finance to a global scale.

In India, the Government’s Viability Gap Funding (VGF) model is one such success-story. Launched in 2004, it supports projects under the Public Private Partnership (PPP) mechanism. VGF grants were made essentially for infrastructure projects where private sector sponsors were selected via competitive bidding. The grant was disbursed at the construction stage after the private sector developer made an equity contribution towards the project. This grant is typically 20 per cent of the project’s capital cost and is allocated from the Government’s budget.

The Government then went a step ahead by defining the norms of how VGF would apply to utility-scale renewable energy projects, specifying the role of the Solar Energy Corporation of India in terms of evaluation, disbursement and monitoring.

Another example is that of cKers Finance and Rockefeller Foundation. Inked in 2018, their partnership involves an investment by Rockefeller in the Delhi-based sustainable energy Non-Banking Financial Company (NBFC) to build a $50 million asset financing portfolio for scaling up India’s decentralised renewable energy segment (DRE).

The Rockefeller investment would help cKers provide funding access at reasonable rates and terms to build the sustainable energy portfolio about 10 per cent of which would be in mini-grids. While the national grid has reached almost all places in India, the quality of supply remains erratic and thus DRE solutions like micro and mini-grids hold value.

Then there is the US-India Clean Energy Finance (USICEF) programme, which supports distributed solar power projects through grants specifically for early-stage project preparation support. Managed by the Climate Policy Initiative, it is a partnership between India’s renewable energy ministry, the US’ Overseas Private Investment Corporation (OPIC) and others. Developers apply to the USICEF, which maintains an empanelled list of service providers (legal and professional services consultancies and so on) and engages them with the grant.

The project preparation support makes these developers investment-ready to raise funding from OPIC and other like-minded firms. The average grant is only about $0.1 million or so but this is a significant challenge for the developers given their small scale and the limitations they face in resources and talent acquisition.

While CSR is only one component of India’s social sector spending, this does give some indication that actual achievement of outcomes is perhaps found wanting at times. The outcome funder model attempts to close this gap. The pre-defined outcome metrics are independently verified by third-party evaluators for on-ground achievement, only upon which the outcome funder (a philanthropy or CSR fund) would meet the enterprise’s interest and/or principle obligations — thus “pay for success.”

This ensures that the philanthropic resources are leveraged in a manner that will help achieve outcomes far more than what direct spending could possibly do.

Other blended models abound globally, each of which can potentially be replicated in India. The US-India Catalytic Solar Finance Facility used catalytic, first-loss capital to create risk-mitigation facilities. The Grid Solar Fund, which funds off-grid solar companies, raised $10 million in political risk insurance from OPIC to attract investments from the private sector.

Climate Investor One Fund raised blended capital at about 1.7 times multiple with a tiered-structure, which bifurcates capital into first-loss, subordinated equity and debt with credit guarantee to make lenders comfortable. Denmark’s Climate Investment Fund raised blended capital at over 1.7 times multiple, by using a preferential model where losses are shared equally by public and private investors but the latter enjoy a preferential return and a catch-up option.

At the same time, a preferential model based on share classes was less effective. The Global Energy Efficiency and Renewable Energy Fund, which paid principal and interest in batches between its A and B share classes, could raise blended capital only at about 0.8 times multiple.

Models apart, another merit of blended finance is that it can cover areas traditionally unserved by conventional funding, like US’ Prime Coalition, which invests in early-stage clean energy technologies, the Africa Clean Energy Facility, which focusses on project preparation and expects to raise a multiple of about 20 times its grants and IFC-GEF’s China Utility Energy Efficiency Programme, which helped local banks lend for energy efficiency.

In the end, compulsions like climate change, greenhouse gas emissions, substituting the import cost of fossil fuels and driving economic growth through “green sectors” will necessitate an urgent scale-up in sustainability projects. To achieve this, innovative mechanisms to raise dedicated green capital will hold the key, especially as Indian banks cannot always fund the long maturities that sustainability projects entail. While blended finance cannot solve all the issues, it can certainly address some of the barriers. The models discussed in this article have already shown demonstrable value which makes them worth emulating. Most of them can be potentially replicated and scaled up further to fund India’s multitude sustainability challenges. Emerging markets with similar challenges to India should also take note.