The sound of the future

The sound of the future 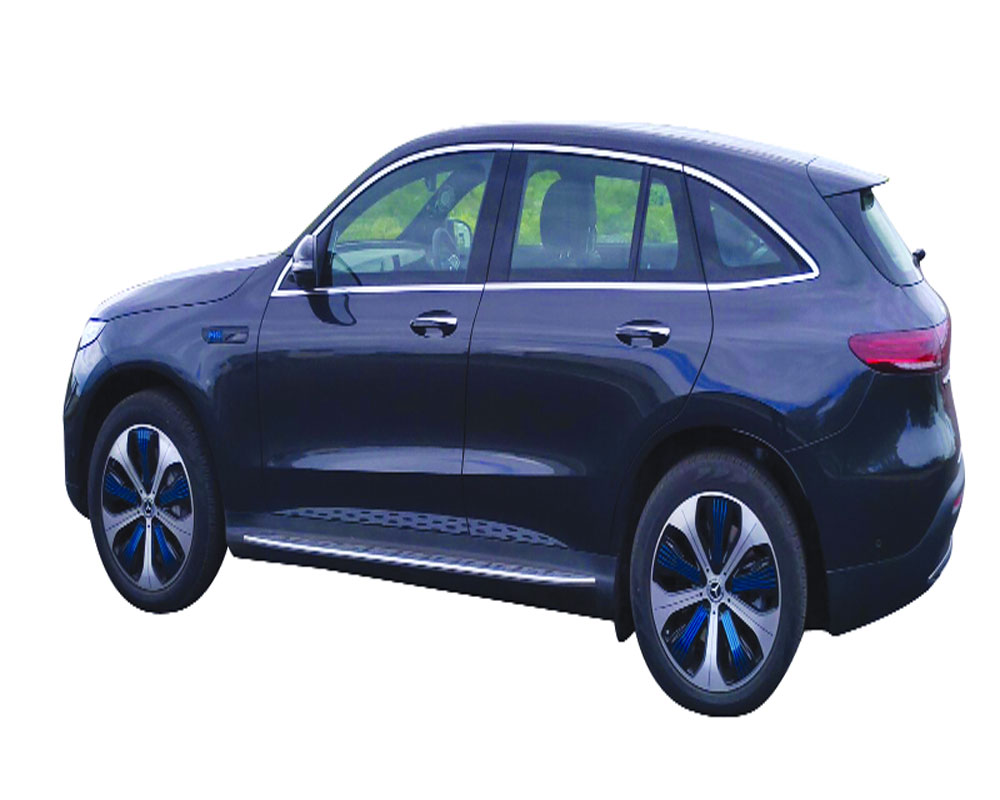 By now, I have driven quite a few battery-powered vehicles. At the start of the year, while visiting friends in the United States, I even drove the Tesla Model 3, which, for me, is the gold standard of electric drivability. Although, I’m not sure the spartan interiors of the Model 3 or any Tesla for that matter would satiate my desire for what I feel a car should have inside. This allows me to dovetail quite nicely to the forthcoming Mercedes-Benz EQC, the first ‘luxury brand’ electric vehicle to be launched in India. I attended a special preview drive of the EQC from Delhi to the ICAT Automotive test centre at Manesar.

Well, what felt weird when setting out from the new Global Star dealership of Mercedes-Benz in Delhi’s Green Park around 9 am was the incredible quietness of the car. Devoid of any engine noise or vibrations, the well-insulated Mercedes-Benz cabin was almost deathly quiet, so much so that playing a bit of music through the sound system was needed just to add some noise. I chose Simon and Garfunkel’s Sound of Silence because the song’s title felt like it resembled the situation. Usually, my go-to song in a Mercedes-Benz is Janis Joplin’s plea Mercedes-Benz but the story goes that despite asking the Lord for a Merc because her friends all had Porsches, she also bought a Porsche!

Anyway, back to the EQC. For that, I will have to hark back to the GLC 220d I drove down the highway recently. The EQC, in size, is similar to the GLC. The interiors of the EQC drop only the slightest hints of its electric nature but the interiors, things like the air-con vents and displays, feel a bit more modern than the GLC. But, and this is quite deliberate, the touch and feel as well as the overall environment of the interiors feel like you are in a modern Mercedes. Tesla is minimalistic inside their cars; Mercedes is not. The reason I feel that this is deliberate is that while it might not attract the electric preachers, it will attract the recently converted thanks to the overall familiarity of the cabin.

Certain things are different than the GLC. First, the ride position is quite high and that is because of a giant battery pack between the wheels. It also means that the EQC does take corners extremely well. The massive weight of the batteries slung low to the ground means that handling feels more sedan-like than SUV-like. It also means that you are worried when you have to face mountains disguised as speed breakers in some parts of the country. However, Mercedes-Benz India technicians assured me that there is reinforcement on the underbody to prevent damage to the battery pack.

You even have ‘flappy paddle’ gear controls on the steering column that allow you to dictate the intensity of the regenerative braking. On the highway, you can set the car to maximum coasting and the surprisingly quiet low-friction tires ensure that speed loss is close to nothing. In maximum regenerative mode, you frankly don’t need the brake pedal. In fact, you could if you wanted brake with the paddles, not that it is a recommended or even the right thing to do.

In every other respect, such as the rear-seat and the boot space, the EQC is comparable to the GLC. There is no ‘frunk’ at the front as that space is taken up by the huge power control unit and the need for a coolant for the car. Why do electric cars need coolant? Well, if you have a Macbook and run some heavy processes on it, it does get very hot! The constant calculations the vehicle’s computers have to make about the amount of power needed and when to recharge — all that makes for a lot of heat. This is actually one of my concerns around the rush to electrify mobility in a country with high levels of ambient heat like India.

Before heading back to Delhi, I decided to give the EQC a blast down the ICAT test track. The EQC can move very fast. The fat, high-voltage cables transfer a lot of energy to both the front and the rear motor. This is a four-wheel drive car after all! But for me, going fast on a straight has always been about noise — the thunderous roar of a V8 or even the whine of a small four-pot that has been maxed out. I can live with electric cars inside the city, indeed the lack of noise may be a good thing, other than inside a locality, but vehicles do make for a lot of the ambient noise pollution in urban areas. But on a track, I have always equated speed with noise and vibration. And this felt more than weird. It felt wrong at a level. I know it is the future and I understand that we have to move away, gradually, from fossil fuels. But I have a high level of anguish here, and it is not about the EQC in particular, but all electric cars. Maybe, I am old now, but well, the future is going to be interesting.