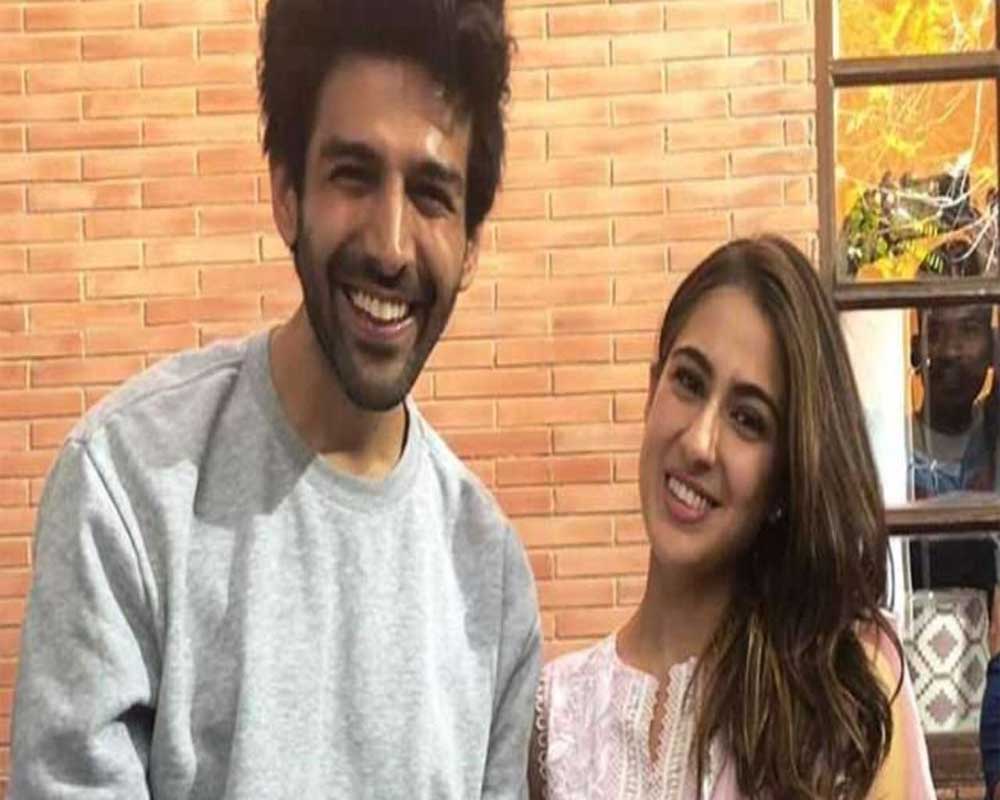 Sara Ali Khan and Kartik Aaryan will be romancing each other in Imtiaz Ali's "Love Aaj Kal" but their off-screen equation was the centre of attention at a press conference here with reporters asking about their Valentine's Day plans.

Rumours of a romance started when Sara, during an episode of "Koffee with Karan", said she liked Kartik and would like to go on a date with him. Soon Ranveer Singh shared a picture of him introducing the two actors and making the heart sign, which was enough to start the Bollywood rumour mill.

When a reporter asked Kartik to finally clarify the status of their relationship, the actor said, "Jab inhone national television pe bola tha, uss time mujhe inpe crush aa gaya tha. Tabhi main phir sharmane laga tha (When she confessed her crush on me on national television, I also developed a crush on her. After that, I felt shy)".

"What should I say when you ask such questions. She said it straight to the camera but what should I say. Tu haan kar ya naa kar tu hai meri Sara (You say yes or you say no, you are my Sara)," he joked.

The next question to Kartik was who was his 'Love Aaj Kal' between Ananya Pandey and Sara. He sidestepped the question, saying "Sara you know it all. She is a good actor."

"What's happening, something like this was asked to you during 'Pati Patni Aur Woh'. Is this 'Love Aaj Kal'," Sara joked.

The actors were also asked about their plans for Valentine's Day, which also happens to be the release date of the movie.

"We will watch 'Love Aaj Kal'. What else. He will also come," Sara said.

"Yes, we will go on a date on Valentine's day," Kartik said.

Sara said they were happy that fans had already accepted them as a pair even before the release of their film and had christened them as 'Saarthik'.

Both the actors said it was a dream come true to work with Ali on the film.

"In my case, he knows how to get you there, you feel exactly what you should be feeling before a scene. I can't believe I have had the opportunity to work with him. It has been so special and wonderful," Sara said.

Kartik said his first phone call with Ali was of 45 minutes and working on the film was like living a dream.

"We have seen 'Rockstar' and 'Jab We Met' and these are some of our favourite movies. When I saw the first poster of my film, I kept looking at the poster for hours. It's a complete circle. He completely changed me as an actor. His style is very simple, and the process was fun," the actor added.

Sara said she could identify with her character of Zoe.

"Zoe represents youth today. The character is carrer driven and I totally agree with and that is the big similarity between me and the character."

So far Sara has worked with Sushant Singh in her debut film "Kedarnath", Ranveer Singh in "Simmba", Kartik Aaryan in "Love Aaj Kal" and Varun Dhawan in "Coolie No 1". She said all her co-stars have never made her feel like a newcomer.

"They all have worked so much in films but they have never made me feel (like a newcomer). They all have been supportive and so helpful, they motivated me," she adds.

Sara has often been pitted against her contemporaries Janhvi Kapoor and Ananya Pandey but finds the comparison unfair.

"All three of us are young girls and I understand why it happens but it doesn't make sense to compare one person with another. We are different as people, actors, they both are my contemporaries and friends. I wish the best for them and I hope they are wishing the same for me."