Savaari Car Rentals in 2019 - A year of road trips

Savaari Car Rentals in 2019 - A year of road trips 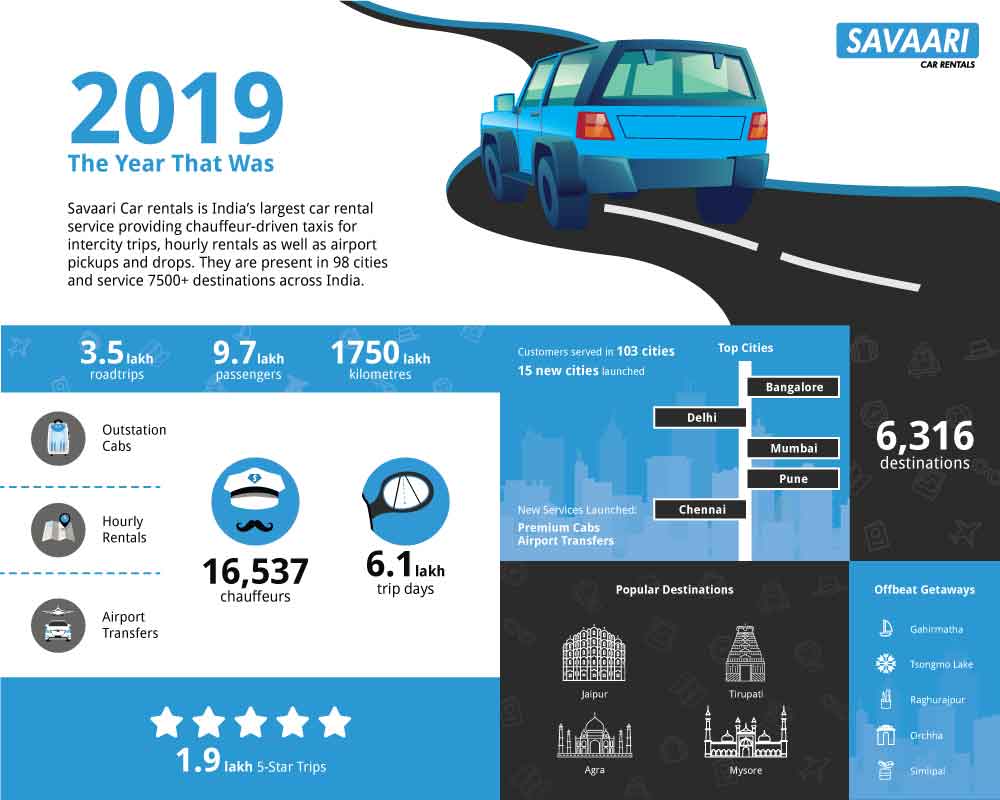 2019 was a watershed year for Savaari Car Rentals. The online aggregator, which is India’s largest intercity cab service, grew at a record pace, expanded the number of cities it serviced, launched exciting new products and significantly improved its unit economics.

During the year, Savaari Car Rentals executed a total of 3.5 Lakh bookings across all three of their product categories- Outstation cabs, Hourly Rentals and Airport Transfers. Savaari’s cabs traversed a total distance of 1,750 lakh kilometres, equivalent to a mind-boggling 4,368 road trips around the earth or 46 round trips from the earth to the moon. 16,537 chauffeurs were deployed to execute these trips and were behind the wheels for 6.1 lakh trip days.

Unsurprisingly, the top cities serviced through the year were Bangalore, Delhi, Mumbai, Pune and Chennai. But there were also a few ‘upstarts’ that did astonishingly well: Coimbatore, Siliguri, Guwahati, Madurai, Amritsar and Lucknow all saw impressive growth in bookings, signalling an increase in penetration across non-metro cities. Greater interest in offbeat travel too has contributed to this growth.

Speaking of offbeat, some of the lesser known destinations that witnessed significant interest include Gahirmatha beach, Tsongmo lake, Raghurajpur art village, Orchha and Simlipal national park; while, the popular destinations across India that continued to see an evergreen demand were- Jaipur, Tirupati, Agra, Mysore and Lonavala.

The year 2019 also marked the launch of 2 new products- Savaari Premium and CNGcabs. Savaari Premium aims at bringing a first-class, VIP experience to road trips. Premium aims to dispel the inertia that has gripped the B2C luxury segment in road travel -  one that has been largely non disruptive and stagnant in service quality. While customers are willing to pay top-dollar for first-class airfare, a corresponding option is simply not available when it comes to road trips. A Savaari Premium customer is entitled to an exceptional on-the-road experience with advantages ranging from brand new vehicles, priority customer service to a hassle-free highway experience. Savaari Premium is currently available in Bangalore, Mumbai, Hyderabad and Chennai.

Secondly, those travelling from or in Delhi and Mumbai can now book CNG cabs at a price point that is 10-15% cheaper than their diesel counterparts. Savaari has now seen successful traction with CNG taxis in these 2 cities over the last year.

‘Airport Transfers’ were launched in July 2019, providing last mile connectivity to travellers frequenting 40+ airports across India. Cabs from Bangalore Airport have seen the most demand so far, with customers booking outstation as well as local trips directly from the airport. The ability to pre-book cabs as well as Savaari’s assurance of on-time pickups and drops makes this an incredibly robust and uniquely positioned product. Pre-booking eliminates long wait times, providing much-needed convenience to travellers, while Savaari’s reputation and long-standing service record makes this a credible and reliable product. And what’s more, all this at affordable, transparent and metered rates.

Kashipath: Travelling from Bangalore to Kashi by Road

Kashipath, loosely translating to ‘the path to Kashi’, was, as the name suggests, a road trip unlike any other. Echoing the peregrinations of the great seers of history, whether Adi Shankaracharya or the more recent Swami Vivekananda, Kashipath was an ambitious itinerary cutting across the heart of India. Traversing 5 states and 21 cities in 10 days, a total distance of almost 5000 Km, the pilgrimage to Kashi was indeed grand and astonishingly beautiful. Starting in Bangalore and reaching its denouement in Varanasi, the itinerary wound its way through the eastern ghats, the grand ruins of Hampi, the Deccan Traps of Maharashtra and the dense forests of Madhya Pradesh. As travel partners for the campaign, Savaari provided the logistics and transport. Few cab services would undertake a task of this scale and with Kashipath, Savaari definitely proved its commitment to road-travel as the ideal way to explore India. Not only was the campaign novel and enriching; it caught the attention of none other than our PM, Sri Narendra Modi, who tweeted in support of the Kashipath Yatra.

In conclusion, 2019 was an incredible year for Savaari Car Rentals. In 2020, Savaari plans to build on this momentum by setting up a robust one-way drop network, a product that has already seen some traction in 2019. Further, Savaari will also look towards aggressively expanding its portfolio of airports after the hugely successful launch and implementation of Airport Transfers, adding 60 more airports by March 2020. ‘Savaari Premium’ too will be expanded to include most other tier 1 cities, bringing luxury to road travel for the first time in India. No doubt, 2020 will be bigger, better and louder than anything before.