Transformation to the new normal

Transformation to the new normal 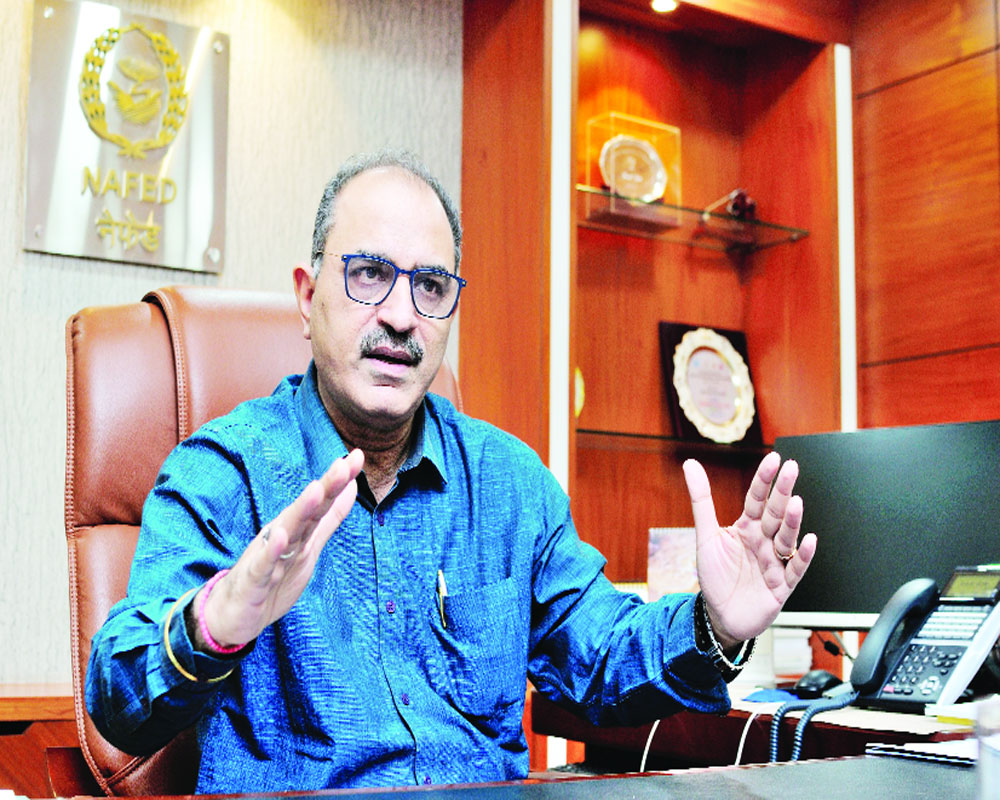 The National Agricultural Cooperative Marketing Federation of India stepped up to meet the challenge posed by the pandemic. In a conversation Sanjeev Kumar Chadha, Managing Director tells The Pioneer’s Saimi Sattar how the federation intends to keep serving the farmers

What were the challenges during the distribution of pulses under the PM Garib Kalyan Ann Yojana (PMGKAY)?

During lockdown everything was shut. The labour was not available, vehicles were not moving and offices were shut. The first 15-20 days were extremely challenging. NAFED was entrusted with the task of supplying 5.85 lakh MT pulses to 36 states/UTs by the Government of India towards the end of March. After that we gradually obtained permissions to get the supply chain moving. We shifted all the operations online and got the pulses delivered in the states. The passes for the mill labourers too were taken by us. April, the first month was very slow. During May we managed to complete more than  50 per cent and completed the supply in the third month.

We started dispatching the pulses from April 15 since the auctions too had to take place before the pulses were allotted, bags printed and repacked. Our pulses are not available in districts unlike those of the Food Corporation of India. Pulses are grown and were stored in five-six states. These had to be moved to mills, where they were milled and repacked. Moreover, the mills did not have the capacity to meet the demand so more millers were added to the approved list.

On the procurement side, we had to double the number of centres to ensure that the farmers don’t have to travel too much. We used all modes of transport to distribute the pulses - ship, flights, road.

What were the challenges during procurement?

The mandis posed a huge challenge as social distancing had to be maintained. Farmers were called in a staggered manner through SMS and their arrival had to be planned in a way that social distancing was maintained. We had to increase the number of centres. For instance, in one cluster of villages, there was one centre and we increased it to two-three. We made payments online. During Covid times we pumped in more than Rs 30,000 crores in the rural economy.

The prices have soared during and post lockdown. So how are you ensuring that consumers are not affected by this?

We were giving free pulses under PMGKAY. As per government instructions, we are intervening in the market and selling the pulses, especially the ones which have seen a spike in the rates. For instance, the prices of Tur have increased. So the intervention of NAFED is to sell it at Rs 85/kg throughout the country. The operation has already started in Tamil Nadu and Andhra Pradesh and soon it will be rolled out in Delhi. This will be sold in our stores and at other places too at this rate under the government of India’s initiative. In the market it is Rs 135/kg.

Then there are onions. In the history of India for the first time we have procured 1,00,000 MT of onions. Normally it is 10-15,000 MT. Last year it was 50,000 MT and this year it has doubled. We started procuring from the farmers towards the end of April when farmers were getting Rs 4 or 5 per kg in the mandi. We bought it for Rs 8 -9 per kg. This programme was inaugurated by Maharashtra Chief Minister Uddhav Thackeray.

How is NAFED’s business evolving in the new normal?

We have to change with the times. During the procurement we have to implement safety measures. Recently we have been declared as an agency for formation of FPOs also. We will make and register farmer producer groups at par with NABARD. We are now focussing on, according to the new Agricultural Policy, whether we should register them in groups or in companies. This will be a game changer. The Prime Minister has announced one lakh crore for infrastructure. We are making business plans for farmers to see how they can access funds.

There is a mandi ahead of Nashik, where in partnership with FPOs who have given us about 4-5 acres of land, where NAFED has made the DPR for the infrastructure that is needed. The group will get a partial subsidy and for the remaining amount NAFED has filed a loan application which could be obtained from the infrastructure fund. We will be linking all the farmer groups with the government schemes. The mandi will have all the infrastructure for packing, sorting, grading, pre-cooling for vegetables so that they stay for some days.

We are setting up a portal for e-kisan mandi. All the big buyers and sellers would be on the platform. The quality of the product can be checked here and the registered farmers will confirm the deal if they find it worth it. Farmers will get that kind of freedom. But it is a long-term project and can only happen over a period of time. We plan to make 100 mandis in the next six months.

NAFED will set up the structure of the mandis outside APMC and hand it over to the APOs and other stakeholders who will run these mandis. The farmers and NAFED  have an equal stake in this. These will be transparent so that the farmers know what is happening inside them.

The decision of selling or not is with the farmer. If the moong dal which the farmer brings has high moisture level of say around 14 percent as opposed to 12 percent, which is allowed, earlier he would have been forced to sell it at a price lower than MSP.  Now the mandi would have facilities for drying. There will also be a machine to remove foreign matter as this too is often a ground for paying less to the farmer. The Fair Average Quality (FAQs) will be maintained by the different facilities that the mandi offers.  A minimal service charge would be levied on the farmers which would go to the FPO running the mandi. This would go in providing the value additions at the mandi, infrastructure, portal costs and more. We are empowering the farmer not to get exploited.

Will the new Agricultural policy lead to a mass migration of farmers to new mandis?

People are apprehensive about the new policy but why are they underestimating the farmer? He will go to the best place where he is getting a benefit. If APMCs don’t do any business below MSP then farmers will never leave those. If farmers have a choice, they can go to the kisan mandis run by him. Just like consumers  have the freedom to buy from a shop or a mall, the farmers too should have the freedom to sell anywhere.

If private people set up these structures and there is no enforcement, chances are there as they are profit-oriented. When I had a meeting with the Defence Minister, Rajnath Singh I had said that the government should support NAFED to run the mandi so that people are confident. But if the mandis  are run by industrialists then it would be said that there has been a sell-off.

We have taken over a company called Federation of Indian FPOs and Aggregators (FIFA). Around 1,000 FPOs have become our members at national level. We are offering our services to make the their DPRs, find out where these organisations can get their money from. Getting access to funds by the farmers’ groups and cooperatives was a big gap area which we are trying to fill.

We also floated a tender recently for setting up more than 500 retails in the country in six months. The farming products will be connected to the market. If we ask any other retailer to keep our products, these groups ask for money. Within next six months you will see NAFED as the second biggest retailer in the country. Even international brands have come and have applied to set up store under the NAFED brand.

We are expanding in retail and have launched masalas with the tag line “kisan se kitchen tak”.

We have signed a contract with farmers in Chattisgarh and Karnataka  giving price assurance for buying millets.

We have already deposited Rs 500 crore in cash in the banks during Covid time. Compare this with three years back when we owed Rs 2,000 crore to the banks which we have paid.