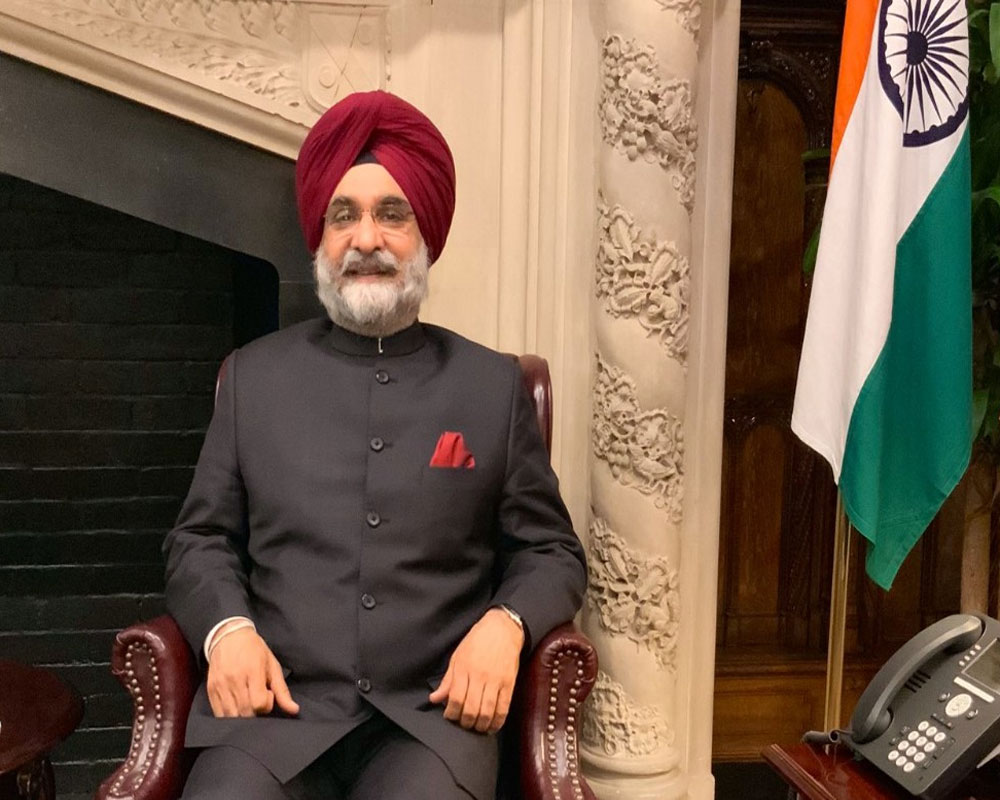 Ahead of the third edition of the two-plus-two dialogue between India and the US later this month, Indian Ambassador to Washington Taranjit Singh Sandhu has underlined five broad principles to take the partnership between the two nations to the "next level".

The dialogue is expected to take place on October 26 and 27 in New Delhi during which both sides are likely to carry out a comprehensive review of their strategic cooperation. US Secretary of State Mike Pompeo and Defence Secretary Defence Secretary Mark Esper are scheduled to visit India for the dialogue.

Sandhu told a think-tank on Friday that under every administration, the partnership between the two largest democracies of the world has touched new heights.

"However, given the true potential of our relations, I believe the best is yet to come. So today, I want to underline five broad principles, which I feel could take the India-US partnership to the next level," the envoy said in his address to the prestigious The Heritage Foundation think-tank here.

These five principles are 'look ahead', 'look broad, look deep', 'strengthen each other', 'explore together' and 'shape together', Sandhu said.

"The second point is related to the first in a way. Look broad, look deep. Both our countries need to look at the big picture. We cannot afford to see things in silos however hard the temptation may be," he said, adding the strategic vision needs to encompass the vision from a single department or from a single stakeholder.

Thirdly, the strength of the partnership comes from strengthening each other, Sandhu asserted.

"Today we have a very broad-based defense partnership with the United States encompassing all aspects of defense cooperation," the ambassador said.

He asserted that this cooperation is not limited to defense trade, which has grown rapidly to over USD 21 billion in just over a decade but covers joint exercises and training, joint research and technology collaboration, co-development, and co-production of defense platforms.

"We have a robust institutional framework with several enabling agreements and understanding concluded in recent years to advance our defense collaboration," Sandhu said.

The designation of India as a Major Defense Partner by the US, and the accordance, of Strategic Trade Authorization-1 Status, by the US is a recognition of our robust defense ties and the immense potential it holds for further expansion across different dimensions, he said in his virtual address.

Observing that India also wants to play a more active role in global rule-making, the top diplomat said New Delhi seeks reform of multilateral institutions to reflect the realities of the times.

India will assume membership of the UN Security Council in January 2021. In these extraordinary times, as an important voice representing one-sixth of humanity, India seeks to play a more active role and contribute to global peace, stability and security. The democratization of global order, can no longer remain elusive, he asserted.

"Fourthly, explore together. Let the partnership, branch into areas, that have hitherto remained unexplored. We need to challenge ourselves," Sandhu said.

"Last but not the least, we all need to shape together, the world where we want to live in. In a way this is what Gandhiji said long ago, 'be the change you want to see in the world'. Trust and friendship have become crucial as we confront extraordinary global challenges today," Sandhu said.