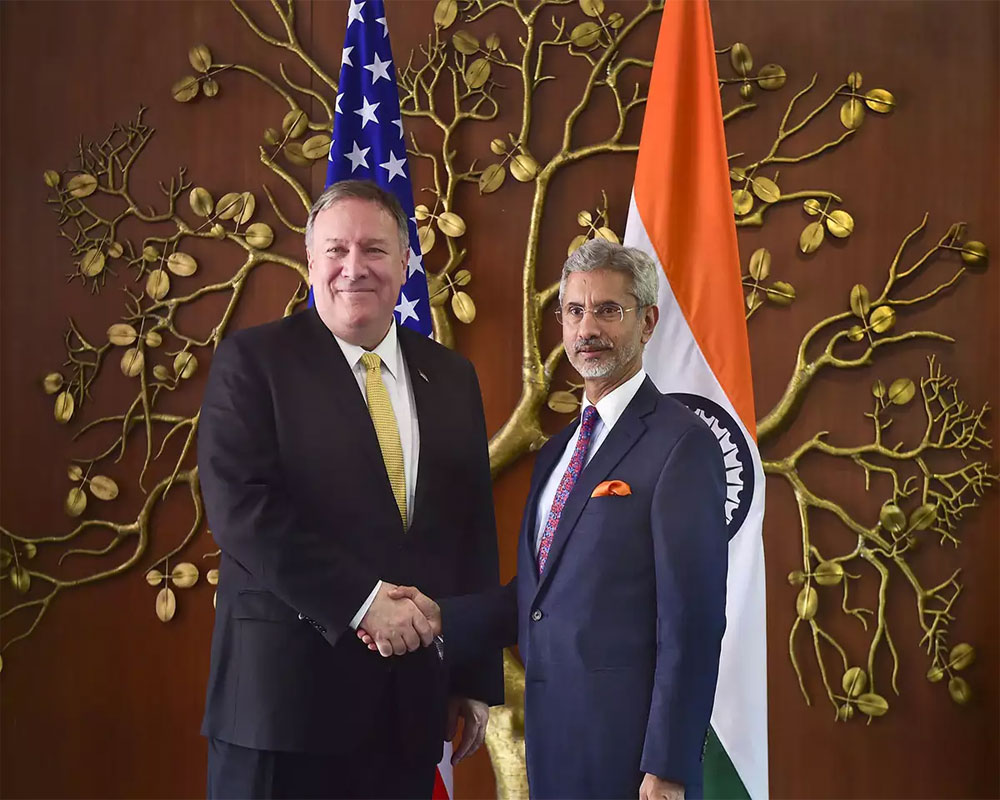 US Secretary of State Mike Pompeo, External Affairs Minister S Jaishankar and Union Finance Minister Nirmala Sitharaman will address a star-studded virtual summit next week on building a better future for both the countries and the world, amidst the COVID-19 and China's aggressive actions.

The two-day virtual India Ideas Summit of the powerful US India Business Council (USIBC) would be held on July 21 and 22.

"The theme for this year's summit is building a better future,” USIBC president Nisha Desai Biswal told PTI in an interview.

“We are firmly committed to the US-India corridor that builds a better future,” she said.

“And that's what we're looking for this year in the India Ideas Summit,” she said.

The virtual summit will start on July 21, with inaugural keynote conversation on “Global Supply Chains & Combatting COVID-19” between Indian-American Congressman Dr Ami Bera and Piyush Goyal, Union Minister of Commerce and Industry and Minister of Railways.

Union Finance Minister Sitharaman will join the USIBC members to share her vision for India's economic recovery and the path to future economic growth in the aftermath of the COVID-19 pandemic. Her remarks would be followed by conversation on India's Economic Recovery by Tarun Bajaj, Secretary of Economic Affairs.

On July 22, after a welcome address by Thomas J Donohue, CEO, US Chamber of Commerce, the External Affairs Minister Jaishankar along with Senator Mark Warner would participate in a discussion on “How the US and India Can Lead the Global Response Post-Pandemic” in a session moderated by former National Security Advisor Stephen Headley.

Soon thereafter Pompeo would deliver a keynote address, followed by a panel discussion on “The Future of US-India Relations in a Post-Pandemic World” between US Ambassador to India Kenneth Juster and his Indian counterpart Taranjit Singh Sandhu.

Pompeo has already lashed out at China and said that Indians have done their best to respond to Beijing's incredibly aggressive actions.

The top American diplomat said last Wednesday that China has a pattern of instigating territorial disputes and the world shouldn't allow this bullying to take place in the region.

The Indian and Chinese armies have been locked in a bitter standoff at multiple locations in eastern Ladakh since May 5. The tension escalated manifold after a violent clash in the Galwan Valley in which 20 Indian Army personnel were killed last month. Currently, both sides are engaged in talks to de-escalate the situation.

“I think that the US-India partnership can become the engine for rebirth of a global economy post (coronavirus) pandemic,” Biswal told PTI in response to a question.

Noting the US and India already have a very deep collaboration in terms of the services trade, Biswal, who was earlier the Assistant Secretary of State for South and Central Asia, said it is well known that a large cross section of the American economy has some operations in India.

The COVID-19 pandemic showed India's strength and resilience in the service economy, and despite a national lockdown the US companies were able to maintain business continuity across the board on the vast majority of these services, whether it's hospital administration, financial sector, or processing of insurance claims. Across the board, the service economy in India has been able to operate, she said.

India, Biswal said, is also known as the 'pharmacy to the world' and the really important role that it plays in both generic pharmaceutical production and in branded pharmaceuticals. Noting that concerns have been expressed in the US and India and other voices about too many of the inputs, the active pharmaceutical ingredients coming from a single source, she said New Delhi is looking to see what it can do to strengthen its pharmaceutical supply chain.

“There is a strong interest in the United States in working with India on that,” said Biswal.

“But we also know that as India looks to attract more global supply chains, that is something that the US supports, and wants to see India be more competitive and more attractive markets and to see more investment go into India to locate sourcing and manufacturing in India,” Biswal said.

5G is another area where both governments have had strong statements and high-level attention on how the US and India can be more collaborative in building the 5G architecture that the global digital economy is going to move. Energy partnership, she observed, has been moving in a strong direction.

“Of course, the defence sector is important not only from the perspective of national security and strategic, but also in terms of the importance of India in the global defence supply chain,” Biswal said.

Brahma Kumari Sister Shivani will have an interactive session on how business leaders are embracing mindfulness, empowering their teams' wellness journeys.