3rd round of India-China parleys today

3rd round of India-China parleys today 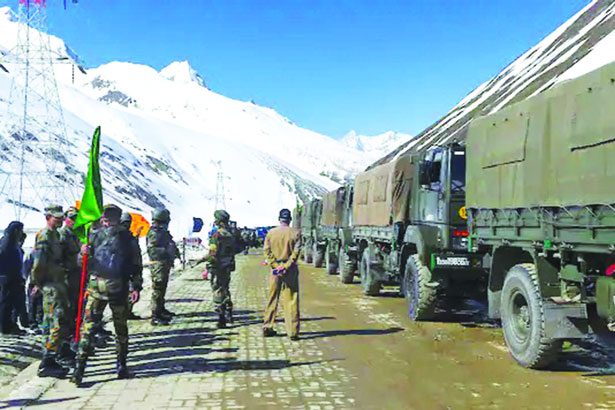 With no let-up in tension on the Line of Actual Control (LAC) in Ladakh, the Corps Commanders of Indian and Chinese armies will meet again on Tuesday. It will be their third round of parleys since June 6 to de-escalate and disengage at the volatile border with China yet to pull back its troops despite an agreement to do so.

The proposed talks between Lt General Harinder Singh and Major General Liu Lin will be held on the Chushul border meeting point on Tuesday morning, sources said here on Monday.

The first round was held on June 6 and the second on June 22. In both the sessions, the two sides agreed to keep all lines of communication open to defuse tension after the bloody clash on June 15 in the Galwan valley.

The talks come against the backdrop of the Chinese refusal to pull back its troops from all the four stand-off sites in Eastern Ladakh including the Galwan valley, Pangong Tso (lake), Hot Springs and Gogra.  Both the armies are in an eyeball to eyeball confrontation at these points for the last 40 to 45 days since the first face-off on May 5.

In the June 6 parleys, the two commanders agreed to mutually retreat in a gradual manner from the stand-off sites. India also insisted that status quo ante prior to May 5 be restored with Chinese troops going back to their positions across the LAC.

The Chinese troops are reported to have intruded into the Indian territory in the Galwan valley, Hot Springs and Pangong Tso.

Lately, the Chinese have stepped up their activities in the Depsang Valley, too, further heightening tension. This area saw a four-week stand-off in 2013. India has a strategically important advanced landing ground or airfield Daulat Beg Oldie here besides the 250-km long important road link from Shyok to Daulat Beg Oldie.

At the second round of talks on June 22, the two sides had come to a “mutual consensus” to disengage along the LAC and modalities for disengagement from all friction areas in Eastern Ladakh were discussed, sources said.  However, there has been no progress since then.

The security establishment here is now readying itself for a long haul with China not budging and continuing with military build-up forcing India also to take adequate measures to guard the 4,000-km long LAC stretching from Ladakh in the west to Arunachal Pradesh in the east.

Sources said any semblance of disengagement and de-escalation is not likely before the onset of winter. Given the harsh weather and terrain, both the armies drastically curtail their patrolling of the LAC during the winter months, they said.