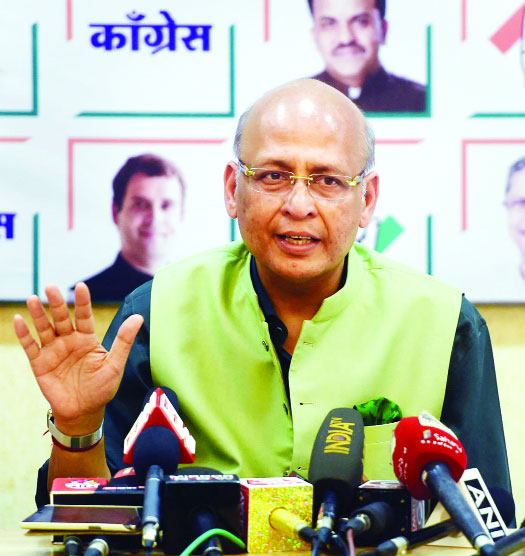 Facing a BJP offensive on fund received from China by the Rajiv Gandhi Foundation, the Congress on Sunday hit back at Prime Minister Narendra Modi for receiving about Rs 50 crore as donation from Chinese companies in the PM Cares Fund to fight Covid-19 pandemic in India.

The Congress alleged that even after the Chinese forces have transgressed into Indian territory, the Prime Minister kept receiving donations from Chinese companies.

The Opposition party also sought details from BJP chief JP Nadda about certain funding of the BJP and the RSS from China and asked the ruling party to disclose its link with  the “China Association for International Friendly Contact” (CAIFC) and reasons for its regular interactions with the ruling Chinese Communist Party (CCP).

Senior Congress spokesperson Abhishek Manu Singhvi asked, “Why has PM Modi received Chinese money in the PM Cares Fund, despite the overt Chinese hostilities? Has the PM received Rs 7 crore from the controversial company Huawei? Does Huawei have a direct connection with People’s Liberation Army of China? Has the Chinese company owning TikTok facilitated a donation of Rs 30 crore to the controversial PM Cares Fund?”

The Congress also sought to know whether the PM Cares Fund received donations about Rs 100 crores from Paytm, which has 38 per cent Chinese ownership, and from other Chinese firms like Oppo Rs 1 crore and Xiomi Rs 15 crore in the fund.

“Has Prime Minister Modi diverted the donations received in PMNRF to the controversial PM Cares Fund and how many hundred crores is the amount diverted?” Singhvi asked at the AICC virtual Press conference.

“No one knows the constitutional or operational framework of the PM Cares Fund and how it is controlled or money given to it utilised. The fund is not even subject to audit by any public authority including CAG. The PMO has gone to the extent of saying this fund is not a public authority.”

“The fund appears to be solely run by the Prime Minister in an opaque and secret fashion with zero transparency and zero accountability,” claimed Singhvi.

The Congress spokesperson questioned that “if the Prime Minister of India will compromise his position by accepting donations of hundreds of crores from Chinese companies in the controversial and opaque fund, then how will he defend the country against Chinese aggression?”

The Congress alleged that the Modi Government continues to sidestep the brazen Chinese transgressions and occupation of Indian territory by Chinese forces in Galwan Valley, Pangong Tso lake area, Hot Springs and Depsang plains up to Y-Junction.

“Prime Minister Narendra Modi unashamedly misleads the nation and serves the sinister agenda of the Chinese by claiming that China has never intruded into the Indian territory, nor is it in occupation of any territory,” alleged Singhvi.

The Congress leader said that the party will keep asking these questions in the national interest.

Two days ago BJP president JP Nadda had alleged that the RGF, which is headed by Sonia Gandhi, continuously received donations from the Chinese Embassy between 2005-09, from the “tax haven” of Luxemburg between 2006-09 and NGOs with commercial interests.

Congress clarified on this issue on late Saturday night that grant RGF accounts were duly audited and statutory returns were filed under Foreign Contributions Regulation Act (FCRA) to the Government of India.

“This grant has been duly reflected in all filings to the income tax and the Home Ministry and no authority has ever found any wrongdoing of any nature. Pursuant to the unprecedented Tsunami in the last week of 2004, RGF received a modest amount of Rs 20 lakh from the Prime Minister’s National Relief Fund in the Financial Year 2005 which was duly utilised to undertake relief activities in the Andaman and Nicobar Islands,” the Congress said in a statement.