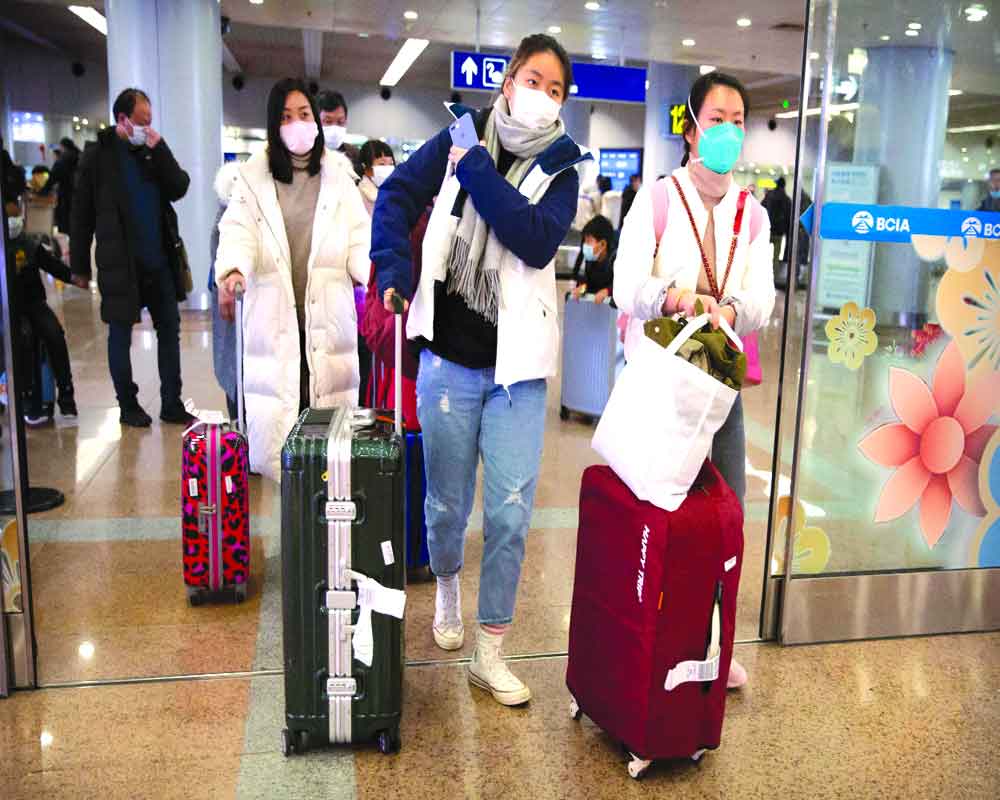 China on Thursday locked down five cities, including Wuhan, suspending all public transport in an unprecedented move to contain the coronavirus that has infected over 630 people and left 17 others dead, dampening the celebrations of the Lunar New Year.

Wuhan, the city of 11 million people where the virus is believed to have first emerged, has no trains or planes in or out. Nationwide, a total of 17 people have died, all of them in and around Wuhan. The victims’ average age was 73, with the oldest 89 and the youngest 48. So far 631 cases have been confirmed in 25 provincial-level regions in the country.

The Government has sealed Wuhan and Huanggang, a prefecture level city with over 7.4 million people, in an unprecedented effort to curb the spread of the deadly novel coronavirus. The other three cities too have substantial population. From 10 am on Thursday, all public transportation, including city buses, subways, ferries and long-distance coaches in Wuhan were suspended, and outbound channels at airports and railway stations closed until further notice. The city officials have asked people in both the cities not to leave.

Wuhan is a major transportation hub and home to many universities.

The Wuhan lockdown is a cause of concern for Indian students who still remained there. The city has about 700 Indian students, majority of them studying medicine. However, most of the students have apparently left for home for the holidays.

As concerns grew over their safety, the Indian Embassy on Thursday opened helplines and established contacts with the concerned Chinese officials to ensure food and other supplies for those who remained in the city.

In new disclosure, Chinese officials on Thursday confirmed fresh cases of coronavirus in people who did not even travel to Wuhan recently. The National Health Commission also reported increasing number of cases with no exposure to Wuhan’s Hunan seafood wholesale market, which is believed to be related to most of the infected cases. The cases without confirmed exposure to the market have been found overseas.

The virus, which a doctor in Wuhan told BBC is spreading at an alarming rate, has dampened the Chinese New Year celebrations beginning Friday.

Chinese all over the world formally bid goodbye to the year of the pig and welcome the year of rat on Friday. The Chinese government has given week long holiday.

In view of virus scare, several cities including Beijing have cancelled special events. The festival is also known as the Spring Festival.

Large cultural activities during spring festival in Beijing such as temple fairs were cancelled to prevent the spread of the virus, state-run Global Times reported.

An official statement said that Beijing’s sprawling imperial palace ‘Forbidden City’ will close on Saturday until further notice to “avoid cross-infection caused by the gathering of people”.

A Chinese government announcement said citizens in Wuhan and Huanggang should not leave without specific reasons.

All residents in the province have been ordered to wear masks.

“Staff of state organs, enterprises and institutions shall wear masks at work, and operators of public venues should set up eye-catching signs to request residents to put on masks before entering,” said a notice issued by the Wuhan municipal government.

“Those who disregard the warning will be punished according to relevant laws and regulations,” it added.

According to the provincial commerce department, the Hubei province will strengthen the monitoring of grain, oil, meat, eggs and vegetables, increase stocks during the spring festival holiday to ensure stable supply, and intensify environmental sanitation control.

Hubei Province has alone reported 444 cases of coronavirus infections. All 17 deaths were reported from the province. Among the confirmed cases, 399 patients are receiving treatment in hospitals, with 71 in severe condition and 24 in critical condition, said Yang Yunyan, vice governor of the province.

Confirmed cases have also been reported from several regions including Xinjiang and Hong Kong, Macao and Taiwan, as well as in the US, Japan, the Republic of Korea, Thailand, Singapore and Vietnam.

The World Health Organisation (WHO) on Wednesday extended to Thursday its emergency talks on whether the coronavirus outbreak in China constitutes a public health emergency of international concern.

Lauding China’s immediate detecting and sharing of the sequencing of the virus, WHO Director-General Tedros Adhanom Ghebreyesus believed that those actions will “minimize the chances of this outbreak spreading internationally.” PTI