Dance of death & destruction in Bengaluru

Dance of death & destruction in Bengaluru 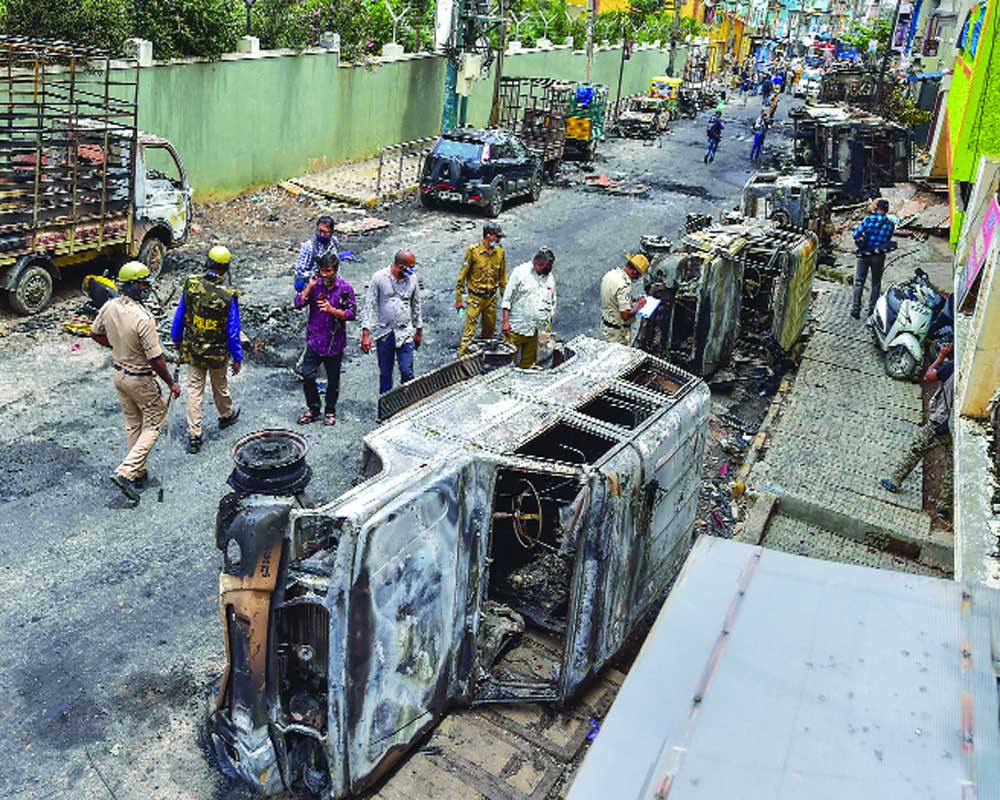 Three people were killed after police opened fire to quell a mob that went on a rampage in a locality Bengaluru rirked over a Facebook post put out by a Congress MLA’s relative, with the Government terming the violence as a “well-planned act.”

Further, 110 people have been arrested in connection with the rioting at Pulakeshi Nagar here. Scores, including around 50 policemen, were injured in the violence that erupted on Tuesday night and continued till the wee hours of Wednesday, apparently triggered by the online post.

SDPI leader Muzamil Pasha has been arrested by Bengaluru Police for his role in the mob violence.

Pulakeshi Nagar MLA Akhanda Srinivasa Murthys residence and a police station at DJ Halli were among those targeted by the angry mob. The house of the MLA, who was not at home at the time, was set on fire by the rioters.

“The manner in which the riots were perpetrated shows that it was a well planned act and was intended to spread to other parts of the city.  These are traitors,” Revenue Minister Ashoka told reporters after meeting Congress MLA in his office at Vidhana Soudha.

The Minister said the MLA’s house was completely damaged, belongings, including Sarees and jewels, were looted and the rest, including vehicles, were set on fire

“It is clear from the intensity of vandalism that the intention was to attack and finish off Srinivasa Murthy. It has to be investigated whether any corporator or anti-social elements from within the state and outside were involved,” Ashoka said.

Tourism Minister CT Ravi said, “It is clear and evident that yesterday’s violent attack was carried out by a Muslim mob in a pre-planned manner.”

Home Minister Basavaraj Bommai said six companies of the Central Reserve Police Force are being dispatched to the violence-hit areas of Bengaluru.

Three companies from Hyderabad and three from Chennai will be deployed in DG Halli and KG Halli police station limits, he told reporters at Udupi before leaving for Bengaluru.

He said the situation is now under control and additional police forces are deployed in the area. Rapid action force and the “Garuda” force are also being deployed, the Minister added.

Meanwhile, the State Government on Wednesday announced that a district magistrate would conduct an enquiry into the violence.

The Government also decided to recover losses caused to public property during the violence from the rioters.

BJP MP Shobha Karandlaje who visited Pulikeshinagar, in a tweet said, “PFI-SDPI conspired this violence, they targeted only Hindu houses & burnt public properties. I strongly condemn this behaviour of a communal elements & urge @CMofKarnataka to take stringent actions against the culprits.”

Pant said Naveen, said to be a nephew of the legislator, who allegedly put out the social media post has been arrested.

Chief Minister BS Yediyurappa said the “attack on the residence of the MLA, the police station and rioting are condemnable.

“Already given directions to initiate stringent action against the criminals (and) the government has initiated all the measures to contain violence,” he said.

The attack on police, media persons and common citizens was unpardonable. The Government will not tolerate such instigation and mischief, he added.

The rioters also torched many police and private vehicles, badly damaged the house and looted the belongings of MLA Murthy and those of his sister.

An ATM was smashed into pieces.

After the arson and violence, the entire DJ Halli resembled a war zone.

One of the victims has been identified as Yasin Pasha, whose father Afzal told reporters that his son was ‘innocent.’

“My son operated a meat shop in the area and had gone for dinner when the police opened fire and he died. He is innocent and was not involved in any arson,” he said.

A teary-eyed Murthy said he wanted the Government to provide him protection and sought a high level probe either by CBI or CID.  “We were not at home when nearly 3,000 people with petrol bombs, clubs, came and burnt the vehicles, damaged our house. I need protection from the government after this incident,” a visibly shaken MLA said.

The opposition Congress and JD(S) extended complete support to the State Government in restoring peace in violence-hit parts of the city and demanded immediate action against the culprits. “I humbly request both Hindus & Muslims of the area to stay calm, maintain peace & live in harmony,” Leader of opposition in the Legislative Assembly, Siddaramaiah tweeted.

JD(S) patriarch HD Deve Gowda in a tweet, condemning the violence, requested the Government to take ‘merciless’ action against those involved.

The BJP accused the Congress of not being “vocal” against the rioters, saying “appeasement” seemed to be its official policy.  “Shameful n disgusting! Karnataka Congress is silent on yesterday’’s vandalism in Bengaluru.

Pseudos are also not vocal against this riot! Freedom from fear of riots is what B’’luru (sic) needs now. Sri B S Yediyurappa must make rioters pay heavily for destruction of properties.#SaveBengaluru,” BJP general secretary P Muralidhar Rao, the BJPs in-charge for Karnataka affairs, tweeted.

BJP general secretary (organisation) B L Santhosh alleged that the Congress was maintaining “dead silence.” He noted that rioters had attacked the house of Congress MLA Murthy, a Dalit. “...Total support for right to riot.For them appeasement is the only official party policy,” he said.

“After 14 hours Karnataka Congress wakes up to blame Naveen for face book post & Police for delay in taking action. One straight question. Does your party support riots like this?  Why Cong hesitates to condemn riots by minority groups? #CongSupportsRiots,” Santosh said in a tweet.

Karnataka Congress leader Dinesh Gundu Rao hit back at Santhosh, accusing him of using the incident to gain political mileage.  His statement is a crude attempt to communalise the issue & divide on caste lines, Rao said, calling it “pathetic and deplorable.”

Responding to his swipe, Santhosh tweeted, “At least acknowledge that your own Dalit MLA’’s house was ransacked. Police station was destroyed.Why Why Why so much of appeasement, fear when your own MLA is targeted ? Be simple & straight Sir.”