Delhi-UP border choked as labourers rush to Bihar, UP

Delhi-UP border choked as labourers rush to Bihar, UP 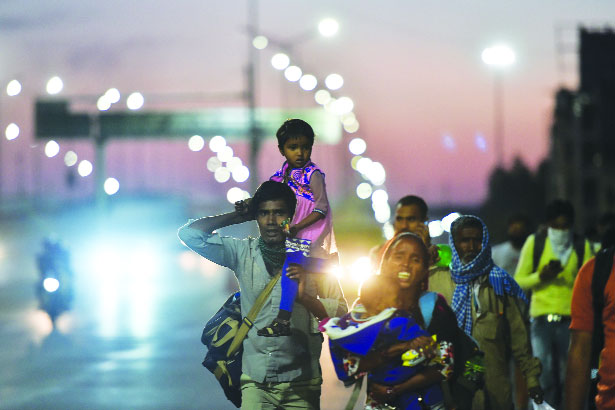 Kejriwal says Govt has arranged buses for migrant workers, but urges them to stay on

Left without any source of income, thousands of migrants mostly from Uttar Pradesh and Bihar on Saturday hit the streets and highways connecting Delhi-NCR in hope to get support from the Government to reach their homes.

Their exodus choked Delhi-UP border at Ghazipur and Anand Vihar bus terminal was crowded with people trying to get into buses to head for Bihar and Uttar Pradesh.

Meanwhile, Delhi Chief Minister Arvind Kejriwal on Saturday said his Government has arranged for buses to transport migrant workers who were already walking back via roads to their respective home States.

Also, the CM appealed to migrant workers leaving Delhi to stay back. Kejriwal in his Press briefing on Friday announced that food will now be served in 325 Government schools after which the Government will officially have the capacity to feed 4 lakh people across 500 centres.

There he requested them to stay back in the city as the Delhi Government has made special arrangements for their food and other basic necessities in various shelters across Delhi. In the video uploaded on Minister’s official Twitter account, he is seen making an appeal to the labourers.

“My appeal to the people walking back to their villages is to return to their homes in Delhi. The Delhi Government has ensured that each one of you has an adequate supply of food. We have arranged for food and other necessities in our night shelters as well as in various Government schools. There is no need to worry,” said Gautam.

The announcement came at a time when hundreds of migrant workers living in Burari, Sant Nagar, Shakarpur and other several places across the city on Saturday morning gathered at Noida and Ghaziabad borders with an aim to move to their States.

At Ghazipur border (Delhi and Ghaziabad) the Delhi Police was seen sending the migrants workers in batches toward UP border, where a public transport was available to ferry them.

The buses were all crowded and people jostled with each other for space, some even sat atop the buses. Hailing mostly from Bihar and UP, the labourers said they will be not able to pay their rent in comings days and they had no choice except to vacate accommodation with a little money left in their hand to survive and move towards their native houses.

“We labourers are paid on daily basis. With no work it was not possible for me to pay next month rent for my house in JJ cluster at Rangpuri so the only option was to leave for home. We have limited money with us now and it is better we should leave for our village,” said Ramesh Kumar (37), a native of Sitapur district in Bihar.

Forced by unprecedented situation, the migrant labourers said they were feeling trapped with no one paying heed towards their plight.

“The day lockdown was announced we (12 people including children) all packed our luggage and left for the bus stand but when we reached here, the bus services were suspended, leaving us with no other option but to spend our nights here but now we are being provided transportation so it’s better we will reach our home,” said Bhure Lal (43), who used to work as a labourer in city and hails from Gorakhpur in Uttar Pradesh.

“Most of us had left towards their homes on foot due to unavailability of transport system. There is no food and even roof, so what would one do. I have two children but I can’t walk towards Kanpur along with them on foot. Now bus is available I can reach my home now,” said Vijay, a resident of Kanpur.