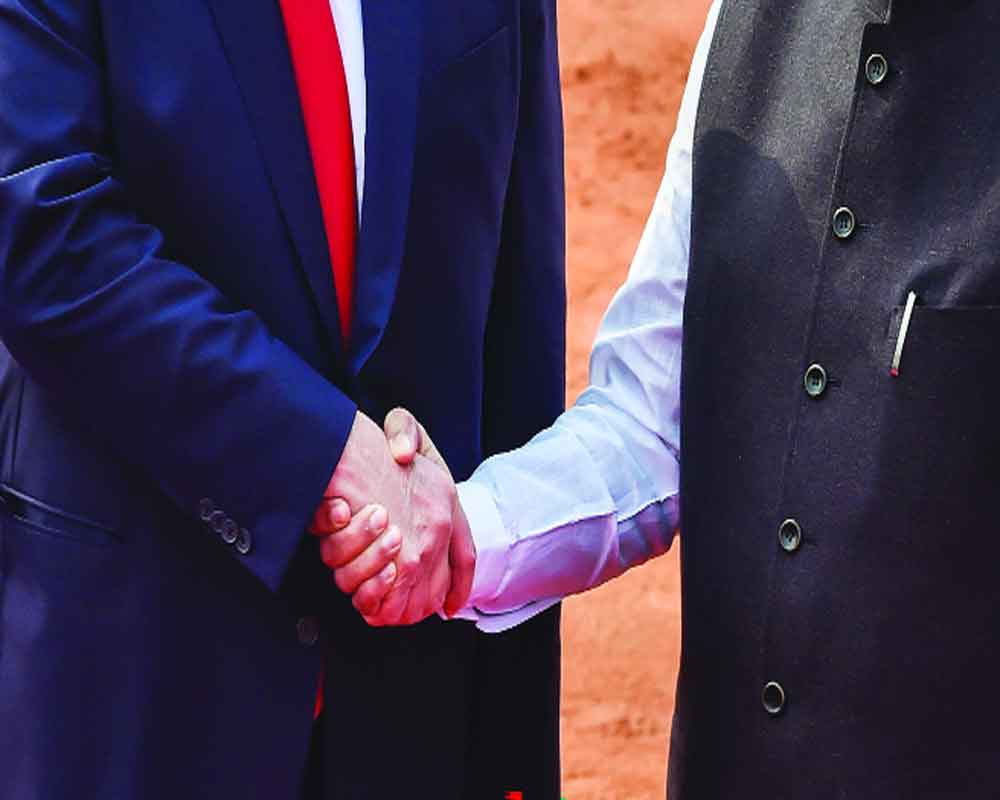 India and the US on Tuesday decided to take their strong ties to comprehensive global partnership level with focus on increasing bilateral defence and security cooperation besides energy security after talks between Prime Minister Narendra Modi and visiting US President Donald Trump here. While Modi described the relationships as “one of the most important partnerships,” Trump said the two countries have made “wonderful deal”.

India signed a three billion dollar deal for procuring from the USA naval multi-role helicopters and Apache attack helicopters for the Army. The two sides also inked three MoUs in the fields of mental health, safety of medical products and energy.

Describing India-US relations as “one of the most important partnerships” of the 21st century, Modi said increasing the bilateral defence and security cooperation is a very key aspect of this relationship. He also announced that the two countries decided to have comprehensive global partnership, giving a strong fillip to strategic ties.

Addressing the media at a joint Press meet after his one on one talk with Trump covering entire range of issues, including defence, security, trade and energy, the Prime Minister said the unprecedented and historic welcome given to Trump in India will be remembered. He also said the relations between the two countries are not merely confined to Governments but are people-driven.

Trump announced that the two countries have finalised defence deals worth $3 billion and asserted that their focus was on having a comprehensive trade deal.

Modi said as far as bilateral trade is concerned, there have been positive talks between the two commerce Ministers.

“President Trump and I have agreed that our teams will give a legal shape to the understanding that our Commerce Ministers have reached. We have also agreed to start negotiations for a big trade deal. We hope that it will yield good results in mutual interest,” the Prime Minister said.

Asserting that the cooperation between India and the US was based on their common democratic values, he said this cooperation for rule based international order, especially in Indo-Pacific and global commons.

“Both of us agree on the importance of sustainable and transparent financing in the development of connectivity infrastructure in the world. Our mutual understanding is not only in each other’s but the world’s interest,” Modi said, adding that the two countries have decided to take Indo-US ties to the comprehensive global partnership level.

The Prime Minister said, “increasing defence and security cooperation between two countries is a very key aspect of the strategic partnership between India and the US. We also agreed on new mechanism to contain drug trafficking.” He also noted that he had met Trump five times in last eight months.

Modi said both leaders held a constructive discussion on every important aspect of the partnership between the two countries, be it defence and security, energy strategic partnership, cooperation in technology, global connectivity, trade relations or people to people ties. Both sides also agreed on having a new mechanism to tackle serious concerns like drug trafficking, narco terrorism and other organised crimes, he added.

India and the US are committed to openness, and fair and balanced trade, and the bilateral trade between them has seen growth in double digit in the last three years, the Prime Minister said.

Talking about defence and strategic ties between the two countries, Trump said the US is looking forward to providing India with some of the best and most feared military equipment on the planet.

“We make the greatest weapons ever made: airplanes, missiles, rockets, ships. We make the best. And we’re dealing now with India. But this includes advanced air defence systems and armed and unarmed aerial vehicles,” Trump said after announcing the three billion dollar deal for 24 naval multi-role helicopters and six Apache attack helicopters.

He said India and the US have expanded their defence cooperation and said both the sides affirmed their commitment to protect their citizens from radical Islamic terrorism. “In this effort, the US is also working productively with Pakistan to confront terrorists who operate on its soil,” Trump said.

The US president said, “earlier, today we expanded our defence cooperation with agreements for India to purchase more than USD 3 billion of advanced American military equipment, including Apache and MH-60 Romeo helicopters -- the finest in the world. These deals will enhance our joint defence capabilities as our militaries continue to train and operate side by side.”

“Another major focus of my discussions with Prime Minister Modi was forging bilateral economic relationships that are fair and reciprocal, he said. “Our teams have made tremendous progress on a comprehensive trade agreement. I am optimistic that we can reach a deal that will be of great importance to both countries. Since, I took office US exports to India are up nearly 60 per cent and exports of high quality American energy have grown by 500 per cent,” Trump said.

He said to further strengthen the economic ties, the US is pleased to announce that the US international development finance cooperation will be establishing a permanent presence right here. “As we deepen our partnership with India, we remember that our two countries are united by shared traditions of democracy and constitutions that protect freedom, individual rights and rule of law,” the US president said.

Later, giving details of the talks between the two leaders, Foreign Secretary Harsh Vardhan Shringla said the new citizenship law did not come up for discussion.

He said India and the US held talks in five major categories - security, defence, energy, technology and people-to-people contact, with Trump assuring India highest consideration for collaboration in defence sector. Shringla said Modi and Trump also decided to move towards what was referred to as “big deal” in trade sector.

He said the two countries have also decided to set up working groups on curbing narcotics trafficking and reinvigorating homeland security dialogue. “President Trump has assured highest consideration to India for procurement, technology and joint collaboration in defence sector,” he said. Trump and Modi held talks for five hours to arrive at a slew of agreements, Shringla said.

He said that energy has emerged as one of most important areas of bilateral cooperation and India is expected to source USD 9 billion from US in 2020. “Indian side raised issue of H1 B visa and highlighted contribution of Indian professionals in high-tech sector,” he said.