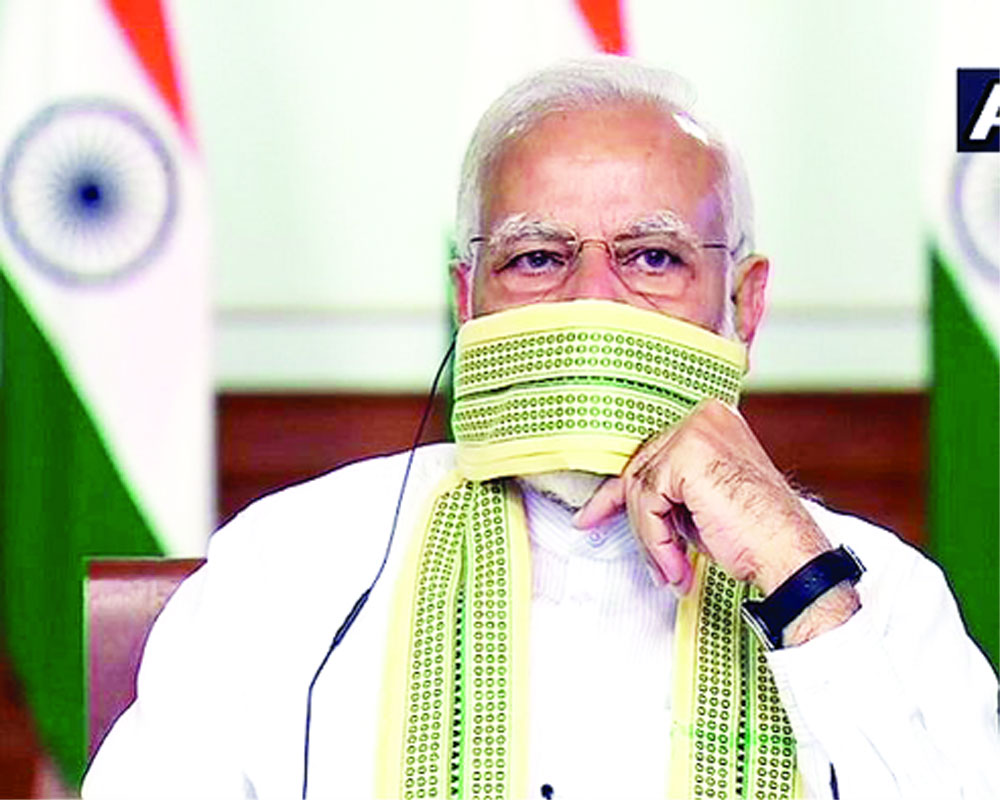 Sending out a stern message in the backdrop of the ongoing India-China stand-off on the Line of Actual Control (LAC) in the eastern Ladakh, Prime Minister Narendra Modi on Sunday said the country has given a befitting response to “those who cast an evil eye on Indian soil in Ladakh” and affirmed that India was capable of answering any adversary.

Addressing the nation in his monthly radio broadcast ‘Maan ki Baat’, the Prime Minister said the world after acknowledging Indian spirit of universal brotherhood in the difficult time of coronavirus pandemic, has now also noticed India’s commitment and might “when it comes to safeguarding her sovereignty and territorial integrity.”

Towards this end, he said India would not “shy away” from giving a befitting response to his adversary, Modi said.

“Those who cast an evil eye on Indian soil in Ladakh have got a befitting response. India honours the spirit of friendship…she is also capable of giving an appropriate response to any adversary, without shying away. Our brave soldiers have proven that they will not let anyone cast an evil eye on the glory and honour of Mother India,” the Prime Minister said in his address which was devoted to the border escalation, coronavirus pandemic and theme of ‘Atmnirbharta’ (self-reliance).

Without naming the ‘GalwanRs  in eastern Ladakh where 20 Indian soldiers were killed in skirmish with Chinese army, the Prime Minister said the entire country comes together in paying tributes to the bravery of our jawans who “attained martyrdom in Ladakh.”

“The entire country bows to them in reverence, with gratitude. Just like their family members, every Indian painfully regrets the loss. The inner sense of pride that families feel on the supreme sacrifice of their brave sons…their sentiment for the country, constitutes the true power, the might of the country”, he said.

“Vidya Vivadaya Dhanam Madaay, Shaktih Pareshaan Paripeednayakhalasya Sadhoh Vipareetam Etat, Gyaanaydaanaych Rakshanay. Which means, a person who is wicked by nature, uses education to foster conflict, wealth for conceit and strength to trouble others. Whereas, a gentleman uses education for knowledge, wealth for helping and strength for protecting. India has always used her might, echoing the same sentiment. India’s solemn resolve is to safeguard her honour and sovereignty. India’s aim is a self-reliant India,” he said.

The Prime Minister said all should strive towards enhancing the country’s capabilities and capacities in safeguarding our borders.

“A self-reliant India would be a tribute to our martyrs in the truest, deepest sense,” Modi said and cited messages from across the country pledging to buy only ‘swadeshi’ goods.

“Rajni ji has written to me from Assam. She says, after watching what happened in eastern Ladakh, she has taken a vow…and the vow is that she will buy only ‘local’….and for the sake of ‘local’, she will also be vocal. I am receiving messages on these lines from every corner of the country. Many have expressed through their letters that they have adopted this very path.

“Similarly, Mohan Ramamurthy from Madurai, writes that he wishes India to be self-reliant in the defence sector,” the Prime Minister said lending a new credence to ‘boycott-China’ pitch in the country.

The current trade deficit is heavily loaded in favour of China which existed in the times of Congress rule but continued to be same during the Modi Government. The current border escalation has fuelled anti-China sentiments across the country with Prime Minister asking countrymen to adopt a new ‘mantra’ of Swadeshi.

Modi said in the fields of defence and technology, India is relentlessly endeavouring to advance and taking strides towards self-reliance.

On the coronavirus crisis, Modi said the country has moved out of the lockdown phase to the unlock phase and will have to focus deeply on two points -- defeating corona and strengthening the economy and bolstering it.

“Only your alertness can save you from corona. Always, remember, if you do not wear a mask, do not observe the two-yard social distancing norms or do not take other precautions, you are putting others at risk besides yourselves, especially the elderly and children at home”, he said and requested countrymen to not be negligent.

In another reference, the Prime Minister quoted an inspiring story of Mandavali, Karnataka, where, he said, an 80-85 year-old elder Kamegowda. Kamegowdaji, an ordinary farmer, who takes out his animals for grazing but at the same time has taken it upon himself to build new ponds and, so far, dug out 16 ponds in his area, Modi said.