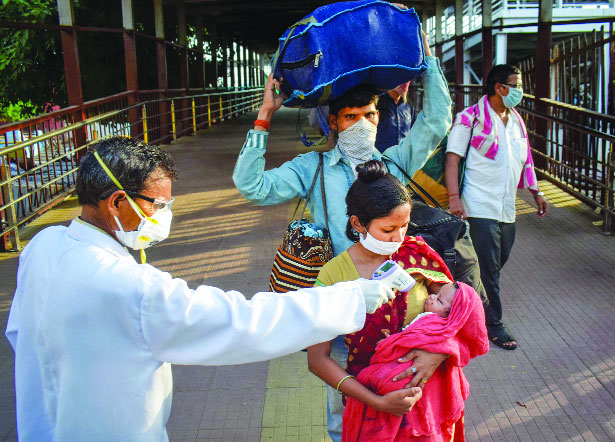 Maharashtra on Sunday crossed 50,000-mark, reporting the highest-single day coronavirus surge with Mumbai recording 30,542 cases as States of Tamil Nadu, Gujarat and Delhi also followed it with high spike in their coronavirus counts. With the addition of around 7,111 new cases and 156 deaths, the total coronavirus cases in the country rose to 1,38,536 and death count crossed 4,000. After today’s spike India on Sunday pipped Iran to emerge as the tenth worst affected country in the world.

Maharashtra led all States in the count of those infected by the virus and crossed 50,231 numbers with 3,041 new cases. The State recorded 58 new deaths taking the total toll in the State to 1,635.

Besides Maharashtra, Tamil Nadu recorded 765 rise in the cases with total count of 16,277. With 8 new deaths, total  toll in the State reached 112. Tamil Nadu Capital Chennai itself has registered total 10,582 cases with 587 new cases and with six deaths on Sunday the toll in the city has reached at 81.

In view status of coronavirus cases in Maharashtra, Tamil Nadu and West Bengal, the Governments there have sought more time to resume large-scale domestic flight services in their respective States on Monday. West Bengal witnessed spike of 208 cases taking total number of affected people  in the State to 3,667 with 272 casualties. The State Capital Kolkata witnessed 52 new cases and total affected in the city numbered 1,665 with 180 deaths.

Gujarat, among top three States in the coronavirus count, recorded a rise of 394 cases taking the total number of those affected with the virus to 14,063 and 29 fresh deaths taking toll figure in the State to 858. Delhi recorded total of 13,418 cases with 508 new cases. With 30 new deaths on Sunday , the National Capital stood at 261 deaths as on Sunday. Other States witnessing spike in cases include Karnataka with 130 new cases taking its count to 2,089 with total 42 casualties, Bihar with rise of 117 cases reaching the count at 2,511 with 11 deaths as on date.

Rajasthan witnessed 286 new cases with total count at 7,028 and 163 fatalities in the State, while Madhya Pradesh recorded 294 new cases for a tally of 6,665 cases and 290 deaths. Odisha addition of 67 cases took the count of coronavirus affected to 1,336 with seven deaths and Assam in the North-East recorded six new cases taking total number of virus affected people to 353 with four casualties.

Assam Health Minister Himanta Biswa Sarma had earlier claimed that return of natives from southern and western regions of India to the Northeast region has led to a sudden rise in Covid-19 positive cases, especially in Assam.

The Central Government has claimed that around 50 lakh stranded migrant labourers have reached their homes.