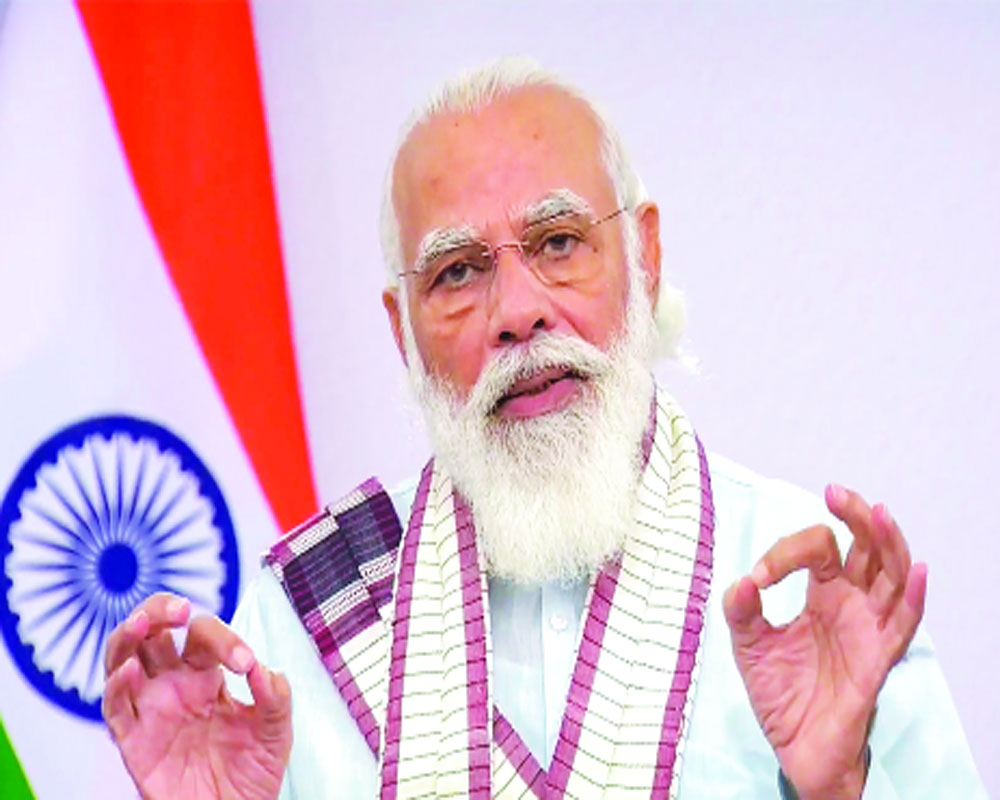 Ahead of festival season, Modi cautions citizens not to drop their guard in fight against Covid-19

Maintaining that the “lockdown is gone but not the virus”, Prime Minister Narendra Modi on Tuesday cautioned citizens ahead of the festival season to not let their guard down in the fight against Covid-19 and allow things to deteriorate. “Jab tak dawai nahi, tab tak dhilayi nahi (no laxity until there is a vaccine for cure),” he reiterated and cited how after witnessing a decline there was a spurt in the caseload in many countries.

In his special address to the nation, his seventh since the Covid-19 outbreak, the Prime Minister said though the hustle-bustle is back in the market, the economy is picking up and people have put their lives back on track, the virus has not gone and the battle against it would continue unless it is finished to the last.

He said many countries, including India, are working on credible vaccine and the Government is readying itself to ensure its speedy delivery to every one in the country.

Modi’s address this time round came in view of the festival season which could disrupt the coronavirus code of conduct, particularly that of social distancing and wearing of masks, thus potentially spiking up the cases manifold. The ongoing campaign for Bihar elections and bypolls to the 28-odd Assembly seats across the country, especially in Madhya Pradesh, also has the potential to contribute to the increase in the virus infections through public meeting, rallies or one-to-one contact.

“India is succeeding in saving more and more lives of its citizens and fares better than developed nations in combating the virus but we need to continue the fight against the virus till the vaccine comes. As against 25,000 persons in a population of 10 lakh getting infected in the US and Brazil, only 5,500 persons in a similar size here were infected in India. As against over 600 deaths per 10 lakh population in countries like the US, Spain, Britain and Brazil, India registered 83 deaths for a similar size group,” he outlined.

He also cited the expansion of the large network and activities in the last few months to combat coronavirus. He said 90 lakh beds have been put in place for coronavirus patients, 12,000 quarantine centres have been installed, 2,000 testing labs established and “soon our testing will be crossing the 10 crore mark”.

But at the same time, he pointed out, pictures and videos have, of late, emerged showing that many people have either stopped following precautions like wearing masks or have become negligent. “This is absolutely not right. Those who have become negligent and are moving around without masks are putting themselves and their families, including children and elderly, at risk. Ye bilkul theek nahin hai (This attitude is absolutely wrong),” he said, adding in the last eight-month selfless health workers and many others have stabilised the situation in the country which should not be allowed to deteriorate.

Citing couplets of saint Kabir and from “Ramcharitmanas”, Modi said one should not rest or feel too happy unless the last mile of success is reached as he requested people to “wear mask, keep distance and wash hands with soap”.

He asked all sections of the society and sectors, particularly media, to create awareness about the  need to fight the coronavirus pandemic till the last.

Modi signed off his address by wishing all good health and extending greetings for ‘navratra’, ‘Id’, ‘Chhath puja’, ‘Gurunanak Parv’ and other festivals in the coming months.

According to the Government, in the last 30 days since Covid-19 cases peaked in India, the growth rate of infections has more than halved-from 92 per cent in the month prior to September 18 to 42 per cent since then.