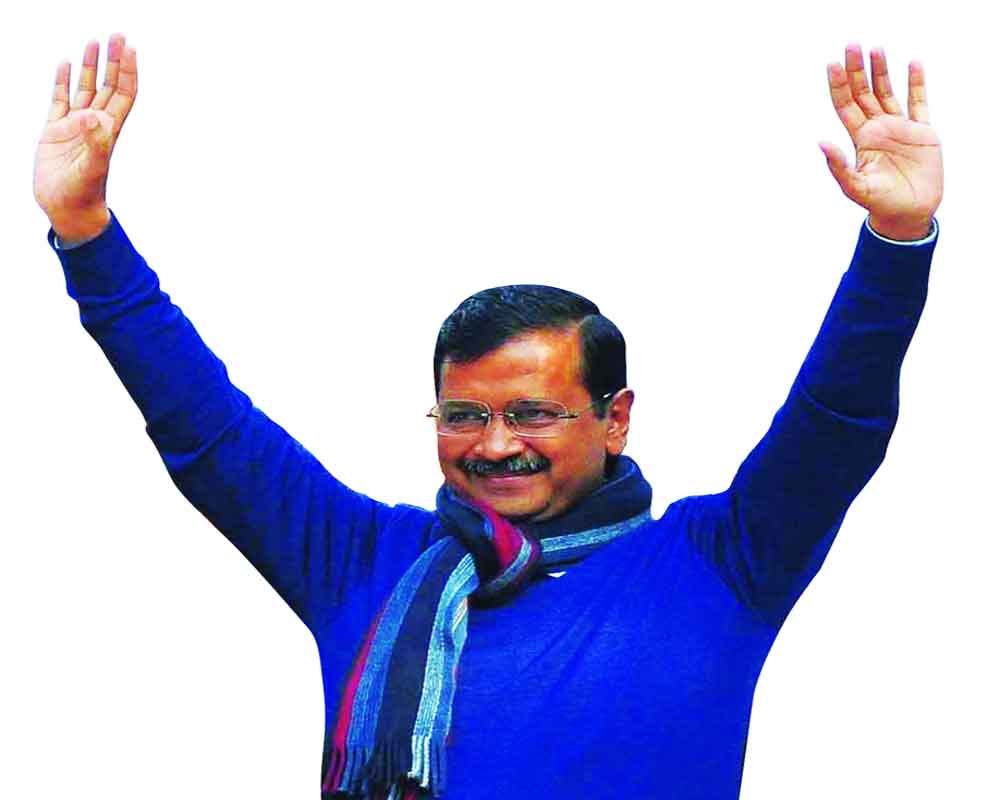 Arvind Kejriwal- led Aam Aadmi Party (AAP) re-affirmed its supremacy over the BJP in the high octane Delhi Assembly elections by winning 62 seat out of 70. The AAP managed to retain its vote — 53.57 per cent this time against 54.3 per cent in 2015 — and beat the anti-incumbency  and the poll campaign blitzkrieg of Home Minister Amit Shah-led BJP.

The national Capital witnessed an intense poll campaign led by the BJP’s humongous poll machinery backed by organisational set-up, against Kejriwal who changed his tactics and did not indulge into the slanging match with the saffron party despite being provoked on several occasions.

However, the BJP could add another five seats to its tally of 3 in 2015 and increase its vote share by over 6 per cent to 38.49 per cent, but that was too little to stop the AAP juggernaut. The Congress which had ruled Delhi for 15 uninterrupted years till AAP came to the scene was vanquished as its 63 out of 66 candidates lost their deposits in the AAP tsunami. The Congress’ ally RJD too lost its deposit on four seats.

Sisodia, the architect of  AAP’s educational revolution in Delhi, won a tough battle against rookie Ravinder Singh Negi of the BJP by over 3,000 votes from Patparganj seat. He had many anxious moments before emerging victorious in the 15th round. AAP’s Okhla candidate Amanatullah Khan, who was in the eye of storm for his alleged association with the Shaheen Bagh protesters, defeated BJP’s Braham Singh by 71,827 votes.

Shaheen Bagh, which falls under the Okhla Assembly constituency, turned out to be the epicentre of anti-CAA protest with women and children holding sit-in protest for about 50 days. Continuous media attention has kept the pot boiling which the BJP capitalised on during poll campaign.

Seelampur, which also witnessed violence during an anti-CAA protest, saw AAP’s Abdul Rehman emerging victorious against Kaushal Kumar Mishra of the BJP. Rehman defeated his rival by a margin of 25,000 votes.

Raghav Chadha, who was fielded from the Rajinder Nagar constituency in place of the sitting AAP MLA, defeated his BJP rival Sardar RP Singh by 20,058 votes.

AAP’s Preeti Tomar won the Tri Nagar seat by 12,000 votes, while Bandana Kumari emerged victorious on the Shalimar Bagh seat by a margin of 800 votes. AAP’s Kuldeep Kumar defeated Raj Kumar of the BJP from the Kondli seat.

Surendra Kumar of the AAP defeated Ranjeet Singh of the BJP to win the Gokalpur seat.

The elections to the Delhi Legislative Assembly were held on February 8. With results being declared on Tuesday, the Lieutenant Governor Anil Baijal dissolved the assembly and new assembly will be constituted once the Election Commssion notified the election results. “The new government will be sworn in on February 16 ”, said Gopal Rai, a minister in the outgoing Delhi government and also the convenor of AAP Delhi. It would be pertinent to mention here that Kejriwal had taken oath as Chief Minister of Delhi on February 14, 2015 at Ramlila Maidan after his party had won a landslide victory against BJP.