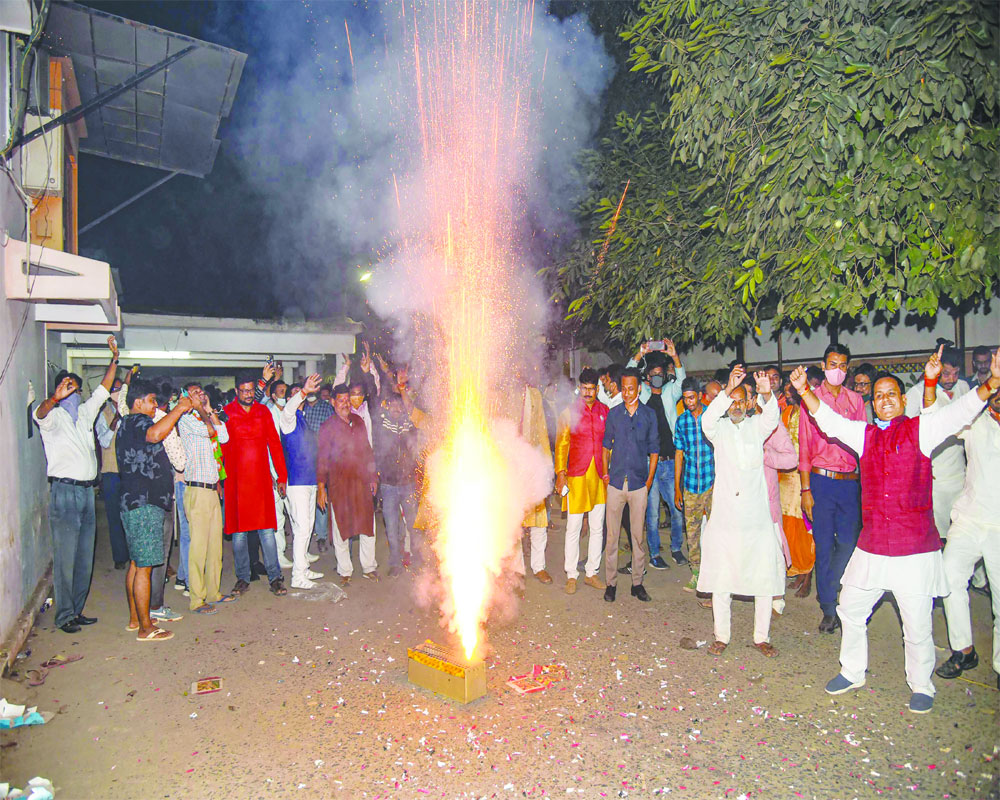 Bihar has stayed saffron. The NDA staved off a strong challenge from RJD-led Grand Alliance to emerge ahead in the battle of Bihar on Tuesday, but the nature of the outcome has considerably weakened the position of Chief Minister Nitish Kumar.

The NDA  barely crossed the halfway mark, winning 124 seats and leading on 1. The Grand Alliance could bag 110 seats. The Election Commission had officially announced 215 confirm results by 12.30 am on Wednesday.

On the other hand, the Congress won just 19 out of the 70 seats it contested. The Congress strike rate was worst among all the major parties in the fray.

With result trickling in with very slow speed, the  RJD came out with a tweet  late Tuesday evening claiming that  election officials were delaying handling certificates to winning candidates from at least 10 seats. The party blamed Chief Minister Nitish Kumar and Deputy Chief Minister Sushil Kumar Modi of conspiring to put pressure on district and polling officials to favour the NDA candidates in closely-contested seats. However, the Election Commission rejected these allegations.

Since the  BJP with 74 seats was miles ahead of the JD(U) in the seat tally, it will be seen doing a favour to Kumar by not claiming the top post for a saffron leader.

Home Minister Amit Shah dialled Kumar and reportedly discussed the  poll results and trends. Shah and BJP president JP Nadda have already announced that Kumar will be the Chief Minister irrespective of the seats won by the two allies.

BJP Bihar chief Sanjay Jaiswal once again repeated that Kumar will be the Chief Minister. “The issue has been cleared by Prime Minister Narendra Modi and party chief JP Nadda much before the elections,” he said, while responding to a query whether Kumar will lead the NDA Government if it secures a majority in the Assembly.

LJP leader Chirag Paswan may have inflicted substantial damage on Kumar, but the CM’s success in retaining his core vote back — women and extremely backward castes — saved the day for him even though his party slipped to number third position behind the BJP and the RJD.

The LJP, whose walking out of the NDA in Bihar just ahead of the polls had sparked speculation that Chirag was set on to downsize Kumar, was down in the dumps.

Kumar has reason to be relieved.  He was pitted against 15-year  of anti-incumbency  that only got further hyped by  the plight of  nearly 25 lakh migrants workers returning home after undergoing heart-rending suffering. The accompanying economic distress caused by the Covid-lockdown compounded his woes,  and  Chirag was already  out to sabotage his prospects, come

The optics could  not have been worse. The crowd jeered and heckled him at places  and also threw slippers and onions at him.  His critics wrote his political obituary and Chirag  threatened to send him to jail in corruption charges.  When  Kumar repeatedly lost his cool, then   it was cited yet another example of the ground slipping under his feet.

When the counting began on Tuesday, the notion gained ground that  JD(U) was headed for a rout. But soon the situation began to change. It became obvious that Kumar’s faith in women voters--- five per cent more women voted in Bihar than the male-and his EBC  support base was ready to avenge their leader’s humiliation.

The JD(U) recovered quite a bit of ground, thought the party slipped to the third place in terms of number of seats.

The post-poll analysis shows that had Chirag   not cut into the JD(U) votes, the Kumar-led outfit would have emerged the largest single party in Bihar.  Chirag seemed to have achieved part of his objective.

The result suits the BJP, which, for the first time, has won more seats than the JD(U) in a series of Assembly polls the two parties fought together. Kumar is no more the “elder brother” in Bihar and the BJP is now in a position to dictate terms to him in a big way.

After being relegated to third position in the seat tally if Kumar accepted the BJP offer to retain his chair, he will have to remain forever indebted to the saffron party and make a huge compromise with his self esteem. After all, what moral right he will have to claim the chair of the CM when the two parties contested equal number of seats, and he is way behind the other partner.

The BJP’s larger presence in the Assembly is sure to find reflection in the Cabinet formation. Kumar will have to let go off several key portfolios and also content with far less number of Ministries.

On the other hand, the BJP has everything to gain. The party retains the politically crucial State, cut downs to size an ally which came in the way its expansion  in the State and also opposed several of its Hindutava agenda. The BJP also had little say in  the matter of transfer and posting as well as administration.

The BJP will certainly extract its pound of flesh if it allowed Kumar to remain in the driver’s seat.  It will try to have greater  say in policy formulations and try to expand its base taking advantage of  a situation where it is seen as the true winner of the battle of Bihar.

The result came as a big blow for  RJD’s bigwigs Siddiqui and Lalu’s aide Bhola Yadav. They lost to their  BJP rivals on Keoti and Hayaghat seats respectively in Darbhanga district.

Tejashwi, the Mahagathbandhan’s chief ministerial candidate is leading in Raghopur, the seat he is seeking to retain, and so is his elder brother Tej Pratap Yadav in Hasanpur.

NDA ally and HAM leader Jitan Ram Manjhi is also leading after trailing for a while in Imamganj. Another NDA partner Mukesh Sahni of the Vikassheel Insan Party (VIP) is also leading in Simri Bakhtiyarpur.

A host of Bihar Ministers including Nand Kishore Yadav, Brijendra Prasad Yadav and Binod Narayan Jha are leading but Shailesh Kumar was trailing.

The HAM and VIP, the other two allies of the NDA, won three and five seats respectively.