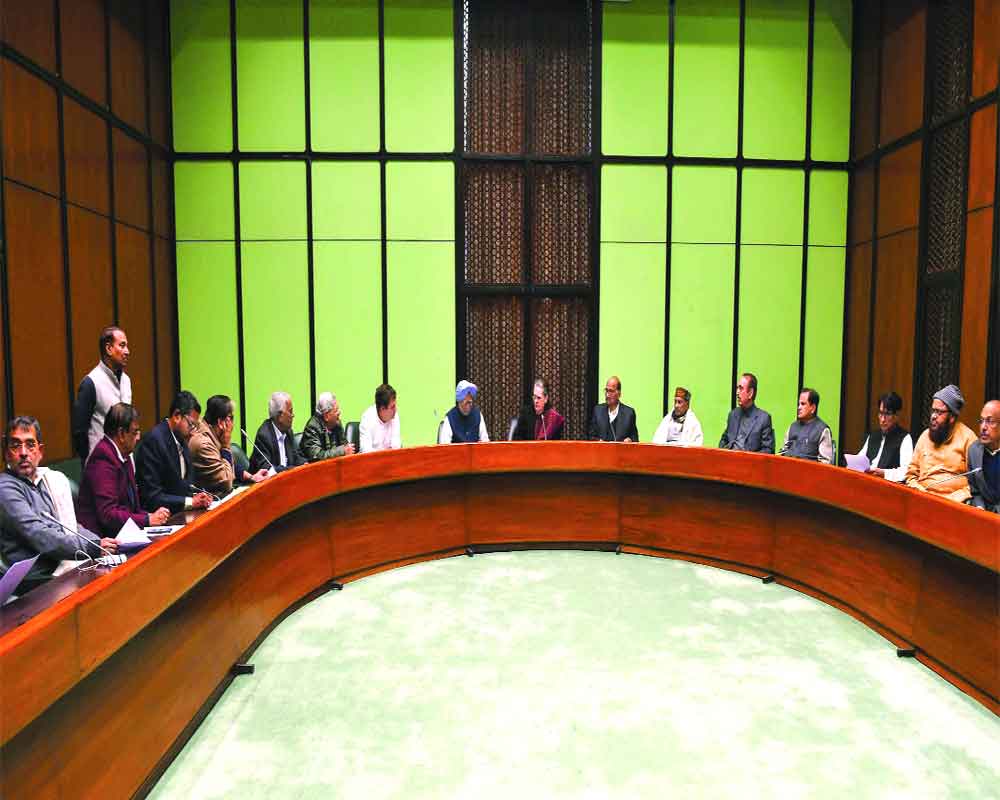 Sonia, who criticised the “shockingly partisan and brutal” crackdown by the police in Delhi and Uttar Pradesh, also said though the CAA and the NRC were the immediate cause of the “nationwide spontaneous protests”, these “reflect widespread frustration and pent up anger, which is now out in the open”.

TMC supremo and West Bengal Chief Minister Mamata Banerjee kept away from the meeting, angry over the Congress and Left cadres unleashing violence in her State during a recent bandh call.

The DMK’s absence, however, came as a surprise.

Sources said BSP’s reason to keep away from the Opposition bandwagon was due to Congress’ poaching her party’s legislators in Rajasthan even though BSP had extended outside support to the Ashok Gehlot Government.

Shiv Sena, the Congress’ new alliance partner in Maharashtra and AAP also stayed away from the meeting. AAP Rajya Sabha member Sanjay Singh said his party was not invited. There was no word, however, on Shiv Sena’s absence. The party had supported CAA in the Lok Sabha but abstained in the Rajya Sabha but lately hurled allegations at NDA over the same Bill.

Sonia accused Prime Minister Narendra Modi and Home Minister Amit Shah of misleading people on the amended Citizenship Act and the NRC, and claimed that their Government stands totally exposed for its inability to govern and provide security to people.

“The Prime Minister and the Home Minister have misled people. They have contradicted their own statements of only weeks ago, and continue with their provocative statements while remaining insensitive to the State suppression and violence that is increasingly becoming commonplace,” she said.

Asserting that there was “unprecedented turmoil” in the country, the Congress chief said the Government has let loose a reign of oppression, spreading hatred and trying to divide people along sectarian lines.

“The nation has watched in horror at the BJP-orchestrated assault on JNU coming so soon after what happened in Jamia (Millia Islamia), BHU (Banaras Hindu University), Allahabad University and AMU (Aligarh Muslim University) and other institutions of higher learning in other parts of the country,” she said, addressing a meeting of the Opposition attended by leaders of 20 parties.

She urged the Opposition parties to work together and thwart the designs of the Government. “The immediate cause is the CAA and NRC, but they reflect widespread frustration and pent up anger, which is now out in the open. The response of the police in UP and Delhi has been shockingly partisan and brutal,” the Congress chief said.

The real issue facing India today is the collapse of economic activity and slowing growth and development, affecting all sections of society, especially the poor and the disadvantaged, the Congress president said.

“The CAA, NPR and NRC are a package that is unconstitutional, which specifically targets the poor, the downtrodden, the SC/STs and the linguistic and religious minorities,” the resolution adopted by the parties said. “The NPR is the basis for the NRC. We demand the withdrawal of the CAA and the immediate stoppage of the nationwide NRC/NPR,” it added.

Congress leader Rahul Gandhi said the Prime Minister should have the courage to speak to the students in universities on why the economy of the country had become a disaster. “Modi was doing the biggest disservice to the nation by dividing it and distracting the attention of people, he told reporters after a meeting of the Opposition that was attended by the leaders of 20 parties,” he said.

“Modi should stand up and have the courage to speak to the youngsters of these universities on why the economy has become a disaster and  why  why unemployment in India is at its highest in 50 years. Unfortunately, the Prime Minister does not have the guts to do this,” Rahul said.

“I challenge the Prime Minister to go to any of the universities, stand over there without his police, without his infrastructure and tell the people what is he going to do with this country,” the Congress leader said.