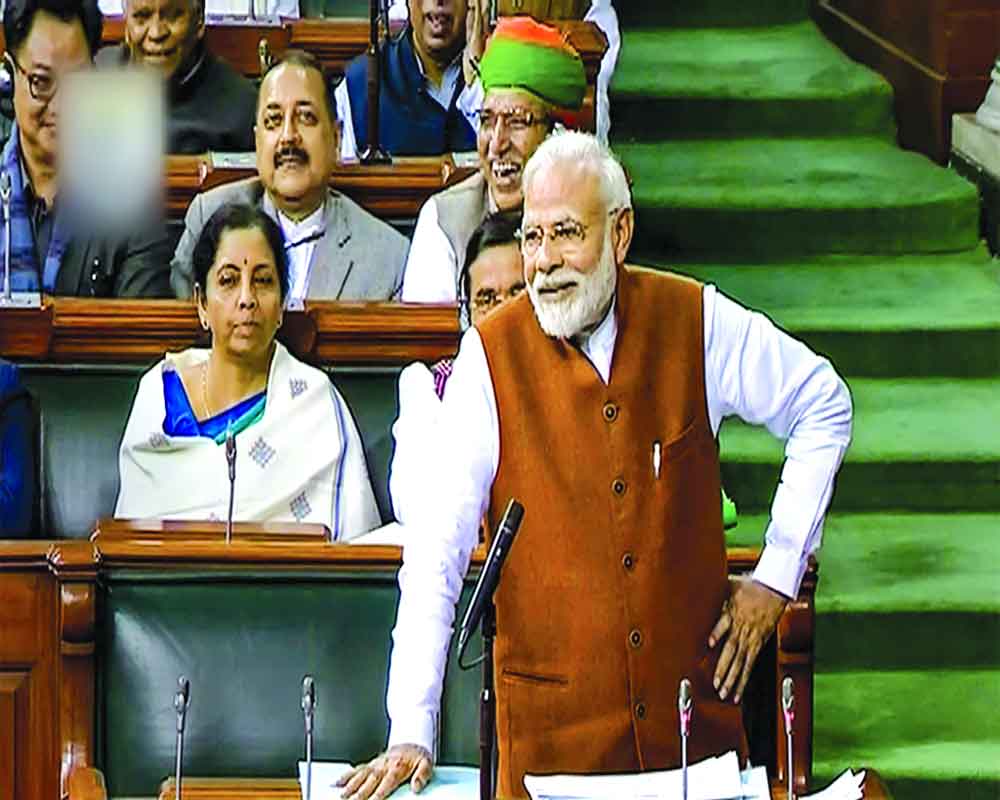 Modi invokes Nehru to back succour for persecuted minorities in Pak

Charging the Opposition with instigating anti-CAA protests and spreading “falsehood”, Prime Minister Narendra Modi on Thursday warned that agitations against laws passed by Parliament and State Assemblies may lead to “anarchy”. He justified action against PDP and NC leaders in Jammu & Kashmir suggesting that his Government cannot be with those supporting “open secession” and lampooned Congress campaign of “save Constitution”.

In a speech laced with humour, “shayari” and verbal wallops at the Opposition leaders, Modi quoted the first Prime Minister of the country, Jawaharlal Nehru, to buttress the case for the CAA saying it was he who first spoke of “pressure” on and “safety” of minorities in East and West Pakistan and need to change the law to grant Indian citizenship to “minorities” coming from Pakistan. Modi sought to ask the Opposition benches whether Pandit Nehru was “communal” to raise the issue of the plight of “minorities” in the neighbouring country.

“This was not only Mahatma Gandhi’s but also Nehru’s sentiments. Was Pandit Nehru communal? Did he discriminate between Hindus and Muslims? Did he want Hindu rashtra?” Modi asked, asserting that several reports, including those of parliamentary panels, had recommended a law like the CAA.

Modi referred to the 1950 Nehru-Liyaqat agreement on minority security and non-discrimination against “religious minorities”. Why did Nehru not use “all citizens”?  he asked to counter protests against exclusion of Muslims in the agreement. He said an year ago before this agreement, Nehru wrote a letter to Assam Chief Minister Gopinath to distinguish between Hindu refugees and Muslim migrants from Pakistan. Modi quoted Nehru’s statement in the Lok Sabha on November 5, 1950 that affected minorities coming to India have right to citizenship and “law needed to be changed.”

The PM quoted Dutt saying in the Constituent Assembly “so far as the side of Pakistan concerned, minorities are practically liquidated. Those who live in East Pakistan live in total frustration”. Modi also gave another instance of Jogendra Nath Mandal, a backward caste leader also the first Law Minister in Pakistan who also likewise returned to India after observing that minorities were being successfully driven out of West Pakistan and the same was being done in the East Pakistan.

As he accused the Congress of telling “lies” and spreading “false propaganda” on the CAA on account of its vote-bank politics, the Prime Minister assured that the CAA will not “discriminate” between Hindus and Muslims and cause no damage to minorities.

Taking a jibe at the Congress on its “save Constitution” pitch, he recalled unconstitutional measures during Emergency, placing of National Advisory Council above Prime Minister and PMO and recently violating Supreme Court’s advise against violent agitations.

So much criticism of the CAA has been made ironically by those who love getting photographed with the group of people who want “tukde tukde” of India, he said.

Modi likened Congress’ stand to that of Pakistan, saying Islamabad spoke the same language for decades to mislead and incite Indian Muslims and that task is now being performed by those “thrown out of the power”, he said.

On Kashmir, Modi quoted PDP’s Mehbooba Mufti, NC’s Farooq Abdullah and Omar Abdullah’s “secessionist” comments and their warning against abrogation of Article 370 and asked “can anyone see them adhering them to the Constitution.

Amid thumping of benches by ruling BJP members and their allies, the Prime Minister invoked the Constitution to warn against street protests against decisions taken by Parliament and Assemblies. The Congress was expected to be a responsible Opposition, but it has taken a wrong turn, he said.

“What will then happen? Can the country run this way? This is road to anarchy... Such a way can put you (Opposition) in trouble as well. I am giving this warning as we all should be concerned about the country,” the Prime Minister said.

Modi said his Government and party is determined and decisive and fast-tracking decision as “we are on walking on a beaten track followed by the Congress”. “If we were to take your path of 70 years, we would not have been able to terminate Article 370”.

The Prime Minister said if his Government worked as per the old ways, the Ram Janmabhoomi issue would have remained unsolved, Kartarpur Sahib corridor would not be a reality and there would be no India-Bangladesh land agreement.

Modi also touched on the issues of economy, unemployment and farmers distress. On the economy, the Prime Minister said the Government has kept the fiscal deficit in check, price rise is also under control and there is macro-economic stability.

Modi said the agriculture Budget, which was earlier Rs 27,000 crore, has now been increased by five times to about Rs 1.5 lakh crore. The agriculture budget has risen five times during the tenure of the NDA Government.

The Prime Minister said driven by politics, some States are not allowing farmers to benefit from the PM Kisan Scheme.

“I appeal to them, let there be no politics in farmer welfare. We all have to work together for the prosperity of farmers of India,” he said.

He said the PM-KISAN Samman Yojana is transforming the lives of many farmers. Several farmers have benefited due to this. In this scheme there are no middlemen and no extra file work.

Referring to the North-East, Modi said for years, distance became a reason to ignore this region. Things have changed now and the region is becoming a growth engine as great work has been done in so many sectors and Ministers and officials are regularly visiting the North-East.

“The Bodo Accord signed now is special because it has brought all stakeholders together and we are moving towards a more peaceful era,” he said.