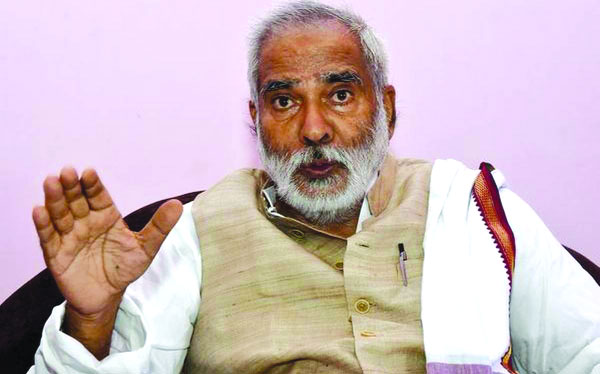 Was upset with Rama Singh’s plan to join RJD

Senior RJD leader Raghuvansh Prasad Singh on Thursday gave a jolt to his long-time associate Lalu Prasad by resigning from the party. The ruling Janata Dal(U) welcomed the development in “anticipation” of his entry into the party.

Raghuvansh had been upset with the party, after muscleman Rama Singh’s plan to join the RJD.

BJP president JP Nadda is heading to Patna on Friday for a two-day visit to finetune the NDA’s poll strategy and campaign.

Bihar will go to polls in October-November and may see some more political churning and alignments in the next few weeks. Emotive issue of caste and religion are expected to be in full play despite the statements and public-posturing to the contrary by all the political parties.

The controversy and “outrage” over death of the young Bollywood actor Sushant Singh Rajput, an inhabitant of Bihar, is seen as a way to attract Thakur votes in the State by the BJP, the JD(U) and the RJD.

The resignation of Raghuvansh Prasad Singh, a Rajput, who may move across to the JD(U) camp is a setback for the RJD ahead of the Assembly elections.

Resigning from the party, Raghuvansh, in a hand-written letter, addressed to RJP chief Lalu Prasad, said he had backed the RJD chief for 32 years after the death of the backward class leader Karpoori Thakur, but will not do so anymore.

Raghuvansh is presently undergoing post Covid-19 treatment at AIIMS-Delhi, from where he wrote this resignation letter.

“We will definitely suffer from his absence. He is the founder of our party,” said a senior RJD leader.

Raghuvansh had been upset with the party, after muscleman Rama Singh made an announcement about him joining the RJD. After Rama’s announcement, Raghuvansh had resigned from the post of party’s national vice-president while he was undergoing treatment for Covid-19 at AIIMS-Patna, following which Rama’s entry was put on hold.

Rama Singh, a criminal-turned-politician is a former Lok Janshakti Party (LJP) MP from Vaishali parliamentary constituency. In 2019 Lok Sabha poll, Rama Singh was denied ticket by the LJP and lost to party candidate Veena Devi while he contested as independent candidate.

Rama Singh is known to have some influence in Raghopur Assembly constituency of Vaishali, represented by Tejashwi Yadav, RJD leader and son of Lalu Prasad.

“He was also not happy with RJD’s State president Jagdanand Singh, another Rajput to be given more responsibilities in the party. The duo does not share very cordial relations,” said sources in the RJD, commenting on Rashuvansh Prasad Singh’s resignation.

Tejashwi Yadav is understood to have tried to dissuade RJD Raghuvansh Prasad Singh but the latter had made up his mind as his demands were not met.

“After the death of ‘jan nayak’ (people’s leader) Karpoori Thakur, I stood behind you for last 32 years but not now…Please forgive me,” said Raghuvansh in his letter from the AIIMS, Delhi, to Lalu Prasad admitted at the Rajendra Institute of Medical Sciences, Ranchi.

JD(U) leaders who have welcomed the resignation said if Raghuvansh Prasad Singh expressed his wish to come to their party, he would be most welcome.

JD(U) charged the RJD with not treating a senior leader of “such a big stature” well.

As the State sees changing political alignments, BJP president is to land in Patna on Friday for a two-day visit when he would attend campaign committee and core committee meetings and fine-tune campaign strategy with leaders of the BJP, JD(U) and the LJP.

On September 12, Nadda would have strategy sessions with the senior leaders of the BJP and thereafter he would launch party’s ‘atmanirbhar abhiyan’ from Patna office of the party. He would also flag off ‘Atmanirbhar Rath’ from the BJP office.

The BJP president is to visit Darbhanga and Ibrahimpur in Muzaffarpur where he is scheduled to have meetings with ‘makhana’ and fish producers and women ‘leechi’ cultivators and farmers, respectively.

Bihar has 243 Assembly constituencies and elections in the State are due in October-November as the tenure of the current Assembly is scheduled to end on November 29.