Ready for any eventuality: India

Ready for any eventuality: India 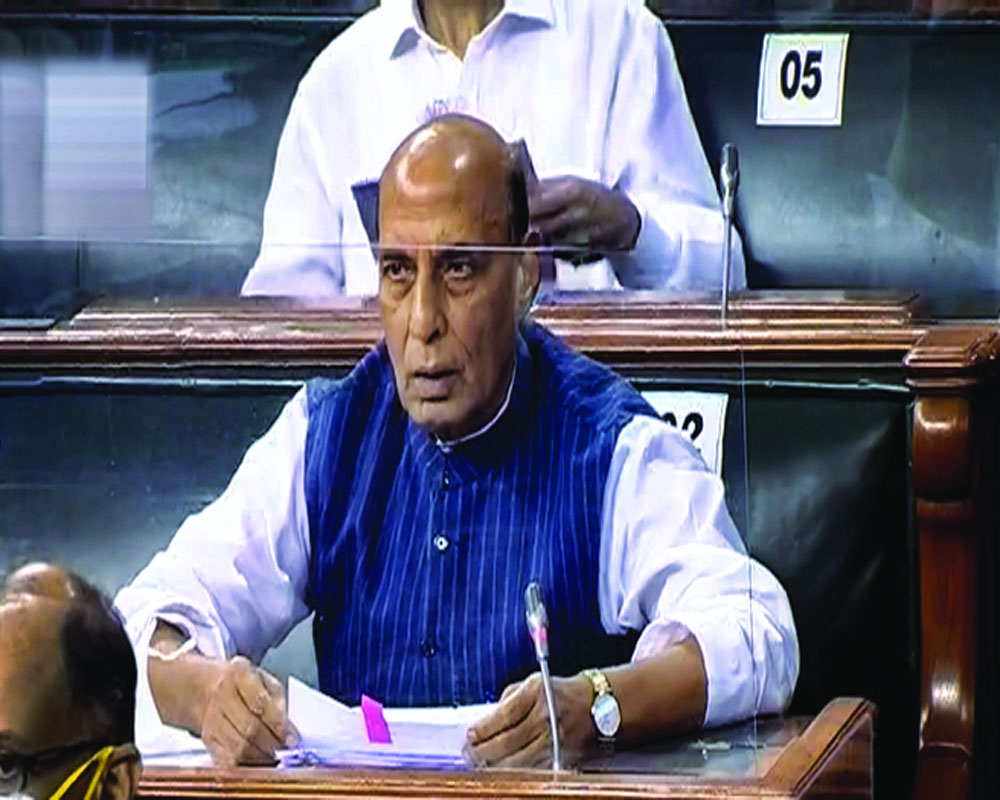 India is committed to peace but “it is also ready for any eventuality,” was Defence Minister Rajnath Singh’s stern message to China from the floor of Parliament on Tuesday with regard to a massive build-up on the Line of Actual Control (LAC) in the eastern Ladakh.

Repeatedly blaming China for attempted transgression of LAC and aggressive behaviour, Singh said in the Lok Sabha that the country’s forces are fully-prepared, stocked with arms, ammunition, food, and winter clothing.

Speaking about the prolonged stand-off with China on the Ladakh border, the Defence Minister accused China of violating established rules and conventions laid down by 1993 and 1996 agreements between the two countries and “transgressing” the border.

While stating that the Indian Army is “battle-ready”, Rajnath said the border issue could be resolved by talks and dialogue. He said that the onus is on Beijing which has “provoked us” by “violent conduct” when talks were still on between the two sides.

The Defence Minister said in the middle of May China “attempted to transgress in many places in the western sector, including Kongka La, Gogra, Galwan and North Bank of Pangong Lake. This invited counter-measures from Indian side”.

In his brief statement in the House, Rajnath said China has mobilised a large number of troops on the LAC and India too has made “suitable counter-moves”. He said he could not go into more details but assured that armed forces are fully prepared to protect the country’s territorial integrity and sovereignty.

Rajnath said the country is facing the challenging situation in Ladakh and the entire House should make a unanimous resolution to strongly back the bravehearts at the borders protecting the country in a difficult situation. “Jawano ka hosla buland hain”, he said amid thumping of desks by the members.

Congress MPs who wanted to ask questions on the issue later walked out from the House when Speaker Om Birla reminded them of rule 370 saying “no question can be asked after Minister’s statement”.

The Defence Minister constantly alluded to the “distrust” created by China by its actions on the ground while talks between the two sides on the military and diplomatic level were underway during the last few months. He said China had increased its mobilisation on the LAC since April and May, this year, and tried to “transgress” LAC.

He said on June 6, commanders of both sides agreed on disengagement, but on June 15 China created a face-off at Galwan where Indian forces inflicted “bhari chhati” (heavy damage”) on the Chinese side.

He said Indian soldiers showed “patience and valour” according to time and situation at Galwan and mentioned the supreme sacrifice of Col Santosh Babu and his 19 “brave soldiers”.

While asserting that “none should doubt our determination” to protect the country, the Defence Minister was quick to add that mutual respect and sensitivity was needed to deescalate the situation on the border. He said both the countries are in dialogue with three guiding principles -- respect LAC, no one-sided violence and all agreements be duly followed.

The Defence Minister, however, mentioned incident of August 29-30 when he accused China of “provocative action from China” which he said was “foiled by us with timely action”. He said, “China’s action was in full disregard of agreements of 1993-1996” which Indian forces follow but not China which creates face-off situations on the LAC from time-to-time.

Rajnath said in the past stand-offs on the border were resolved but “this time scale of troops involvement and number of friction points, is different”. The Defence Minister, however, asserted that “we are fully ready to accept the situation and challenge”.

On the possibility of de-escalation through dialogue, Rajnath said he himself met his Chinese counterpart in Moscow on September 4 and spoke about armed provocation and aggressive behaviour by Chinese forces and “made it clear that we are committed to our sovereignty and territorial integrity”. He said Foreign Minister S Jaishankar also met his Chinese counterpart at Moscow and made the point at the border the issue can be resolved if the other side implements agreements “sincerely and faithfully”.

In the beginning of his statement Rajnath gave historical details of the India-China boundary dispute saying while “China does not accept customary and traditional alignment of the boundary, we accept that this alignment is based on well-established geographical principles which are confirmed not only by treaties and agreements but also by historic usage and practices. Both sides are aware of this for centuries”.

He said China has illegally occupied around 38,000 Sq km Indian land in Ladakh, besides 5,180 Sq km in PoK under the so-called 1963 agreement illegally transferred by Pakistan to China. He said China also has claims on 90,000 Sq Km land on the boundary of Arunachal Pradesh. The Defence Minister said China and India have different perception of LAC and border needs to be settled by dialogue and discussion.