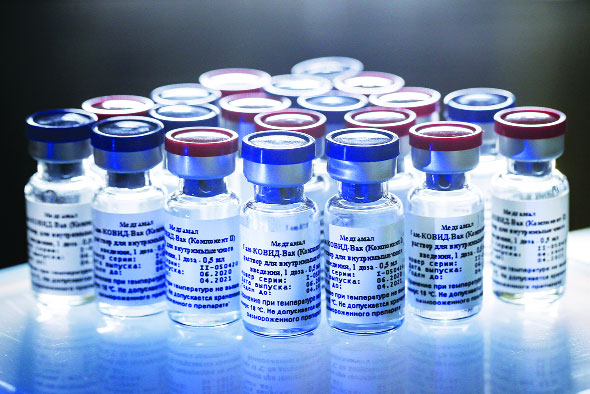 Amid the race to develop a Covid-19 vaccine, Russia has become the first country in the world to register a vaccine against coronavirus disease. Russian President Vladimir Putin announced the approval of a coronavirus vaccine for use on Tuesday, claiming it as a “world first,” and one of his daughters has already been inoculated amid continued concern and unanswered questions over its safety and effectiveness.

The vaccine has been given regulatory approval after less than two months of testing on humans. The vaccine was named ‘Sputnik V’ in reference to the 1957 launch of a Soviet satellite, which opened space to exploration by humans.

“This morning, for the first time in the world, a vaccine against the new coronavirus was registered in Russia,” Putin said during a televised video-conference call with Government Ministers. “One of my daughters had this vaccine. I think in this sense she took part in the experiment,” Putin said.

He said that his daughter had a temperature of 38 degrees Celsius (100.4 Fahrenheit) on the day of the first vaccine injection, and then it dropped to just over 37 degrees (98.6 Fahrenheit) on the following day. After the second shot she again had a slight increase in temperature, but then it was all over. “She’s feeling well and has high number of antibodies,” Putin added.

Meanwhile, Dr Randeep Guleria, Director of the New Delhi-based All India Institute of Medical Sciences (AIIMS), has said, “First, we need to be clear that the vaccine is safe. That is the first standard that the world will look at for mass production.”

He also said that if the vaccine makes antibodies, how long would they last for, also needs to be answered.

The claim of victory by Putin in the global push to make an effective vaccine against Covid-19 comes amid suggestions that Russia has cut essential corners in its development. The vaccine has yet to go through crucial Phase 3 trials where it would be administered to thousands of people.

Experts have voiced unease over Moscow’s rapid approval process for the vaccine. On Tuesday, the World Health Organisation (WHO) said it had been in talks with Russian authorities about undertaking a review of the vaccine.

Amid fears that safety could have been compromised, the WHO urged Russia last week to follow international guidelines for producing a vaccine against Covid-19. Presently, coronavirus pandemic has infected more than 20 million people and killed nearly 750,000 worldwide, thus, crippling world economies.

The vaccine is developed jointly by Gamaleya Research Institute and the Russian Defence Ministry. Putin said the vaccine had passed all the required checks. Putin also asked Health Minister Mikhail Murashko to keep him informed about the vaccine, while at the same time noting that he knows “it works quite effectively” and “forms a stable immunity”.

Currently, the Russian vaccine is not among the WHO’s list of six vaccines that have reached phase three clinical trials, which involve more widespread testing in humans. There are 25 other vaccines in the clinical evaluation stage of development and a further 139 candidate vaccines in the preclinical evaluation stage according to the WHO. Companies including AstraZeneca Plc and Moderna Inc. are still conducting final-stage trials of their vaccines in studies that are expected to soon yield results. Despite rapid progress, most experts think any vaccine would not become widely available until mid-2021.

According to Sputnik News, Russian Health Minister Mikhail Murashko has said that the first Russian vaccine against the coronavirus will begin to be produced at two sites - the Gamaleya Research Institute and the company Binnopharm. The vaccine is being funded and promoted by the Russian Direct Investment Fund. The vaccine is expected to go into civilian circulation on 1 January 2021, according to the registration certificate.

Kirill Dmitriev, head of the Russian Direct Investment Fund (RDIF), which is funding the vaccine research, said they have received preliminary applications for over 1 billion doses of the vaccine from 20 countries.