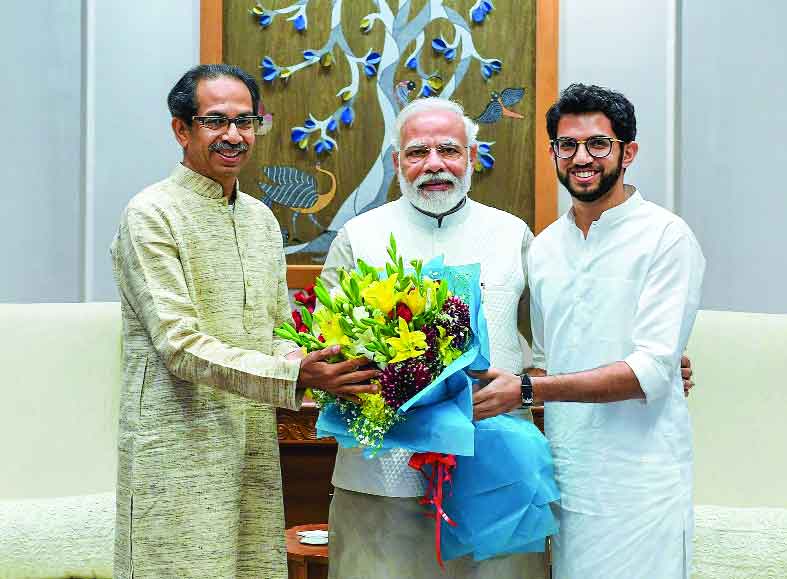 Against the backdrop of his simmering differences on a host of issues with the Congress and the NCP, Maharashtra Chief Minister Uddhav Thackeray met Prime Minister Narendra Modi and Congress president Sonia Gandhi on Friday, his first visit to Delhi after taking up the reins of the State.

Uddhav’s son Aditya Thackeray, who is a Minister in his Cabinet, accompanied him, during his meeting with Modi.

After the meeting, Uddhav said, “I had a good discussion with the Prime Minister over issues concerning Maharashtra. I also discussed the CAA, NPR and NRC with the PM. No one needs to fear about the CAA. The NPR is not going to throw anyone out of the country,” Uddhav said.

He also denied that there was any friction among the constituents of the Maha Aghadi, while asserting that the Maharashtra Government will complete its five-year term.

The Congress and the NCP are reportedly miffed over the Chief Minister’s stand on NPR and CAA. He also said the Prime Minister had assured him of extending all cooperation to the Maharashtra Government.

In his meeting with Sonia, Udhhav is believed to have told the Congress president not to pay any heed to rumour about stability of the Government and assured her that the Shiv Sena-NCP and Congress alliance regime will last full five years.

Sources said Sonia also sought to know the Shiv Sena views on CAA, NRC and wanted that there should be clarity on them.

Udhhav also conveyed to the Congress leadership about the berths going to fall vacant in the Rajya Sabha and that there should be a separate meeting of top leaders to discuss the representation of the alliance in the upper house.

Before the meet, senior Shiv Sena leader Sanjay Raut played down Thackeray’s interaction with Modi. “Yes, Chief Minister Uddhav Thackeray will meet PM Modi. This is only a meeting, nothing else should be read into it. Jai Maharashtra,” he tweeted in Marathi.

Barely months after the Shiv Sena, Congress and NCP formed a Government in Maharashtra, rifts among the three alliance partners have come to the surface. Contrary to the NCP and Congress’s stand on the Citizenship Amendment Act and the National Population Register, Uddhav Thackeray earlier this week extended his support to the two exercises.

“The CAA and the NRC (National Register of Citizens) are different and NPR is different. No one has to worry if the CAA gets implemented,” he had said.

“The NRC is not there and will not be implemented in the State... The Centre has not discussed NRC as of now,” he added.

Nationalist Congress chief Sharad Pawar, who had a crucial role in bringing together the Sena and the Congress, said on Tuesday they will discuss the matter with Uddhav Thackeray’s party and bring it on the same page. “We will convince the Sena,” he said. Another point of disagreement in the Maharashtra alliance is the Elgar Parishad case, which has been handed over to the National Investigation Agency.   Pawar has claimed the case was transferred the day State Ministers met police officers.

Shortly after Pawar’s remarks, Thackeray tweeted that he will ensure a related probe into the Koregaon-Bhima violence is not taken over by the Centre.

Over the last few weeks, there have been some awkward moments in the Maharashtra coalition after Chief Minister Uddhav asserted that he did not see anything wrong with implementing the national population register. It is a stand that contradicts the Congress position, which counts the population register as the big step towards the National Register of Citizens.

Several States ruled by non-NDA parties have already declared that they will not implement the population register. Congress leaders have indicated that it would be embarrassing if the Maharashtra Government goes ahead to implement NPR.