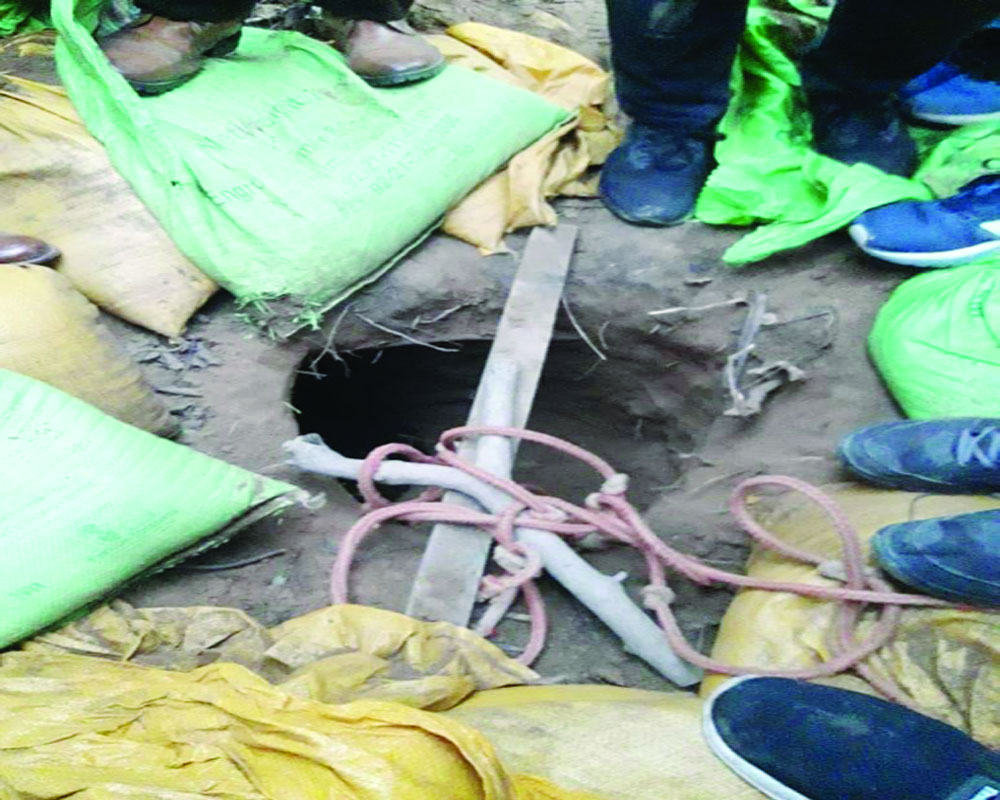 The tunnel was used by the four-member fidayeen squad (members of a suicide squad) of Jaish-e- Mohammad (JeM) to infiltrate inside the Indian territory before they were neutralised at Ban Toll Plaza near Nagotra on November 19.

Inspector General of BSF, Jammu Frontier, NS Jamwal, who visited the tunnel site told reporters, “In a coordinated operation a joint team of BSF and Jammu & Kashmir police managed to timely detect this cross border tunnel used by the JeM group to crawl inside the Indian territory”. He said the tunnel was approximately 160-metre-long and 20-25 feet deep.

“The exit of the tunnel was in thick bushes, carefully concealed and meticulously covered with soil and wild growth. The mouth of the tunnel is strengthened and reinforced by the sand bags with markings of Karachi, Pakistan,” he added.

Referring to the detection of tunnel IG, BSF said it appears it is a freshly dug tunnel and appears to be used for the first time. He said it appears that proper engineering effort has gone in making the tunnel which shows the hand of the establishment.

Director General of Police, Dilbagh Singh, who was also present on the spot, told reporters the items used by the tunnel diggers to cover it up all carry the markings of items made in Pakistan. “Earlier, the seizures made from the encounter site at Ban Toll Plaza also clearly indicated Pak hand in pushing these groups to execute their sinister design of disrupting DDC polls in Jammu & Kashmir,” he said.

He said JeM terrorists were tasked by their Pakistan based handlers to disrupt the district development council polls beginning November 28 in Jammu & Kashmir.  To execute their sinister plot the JeM group was launched inside the Indian territory along with the huge consignment of arms and ammunition which included 11 AK rifles, 29 grenades, RDX explosives, etc.

According to the preliminary investigations made public by the Jammu and Kashmir police, “The JeM terrorists had infiltrated inside the Indian territory through this tunnel on November 18 between 8.30 and 9.00 p.m”.

“From there they took 5-6 hours to reach the National Highway and boarded the Kashmir bound truck in the wee hours”.  The truck had crossed Thandi Khui toll plaza at 3.44 a.m on November 19 before reaching Ban Toll Plaza around 4.50 a.m.

At present the police team is looking for a guide who may have helped the members of the ‘fidayeen’ squad to safely reach the highway and assisted them in locating the truck parked on the highway.  It is learnt the terrorists were picked up by a truck from Village Jatwal, Distt-Samba on the National Highway. Inspector General of Police, Jammu range Mukesh Singh said the investigating team used mobile phone, radio sets to track down the possible route of infiltration. He said the investigations were still going on in the case.

Earlier, on August 29 a similar ‘rat hole’ tunnel, which was also 15-20 feet feet deep and 150 metres long, was detected by the Border Security Force (BSF) jawans along the International border in the Samba sector of Jammu frontier.

The tunnel found in village Galar of Samba was the seventh such tunnel found on the international border since July 2012. In the past terrorist handlers sitting across the border in Pakistan have used this mode of infiltration to push armed terrorists inside the Indian side.

On July 27, 2012 BSF had detected tunnel along IB in Samba sector

Another tunnel was detected by BSF on May 2, 2014 in the same Samba sector

November 29 2016, it is believed terrorists who targeted Nagrota army camp and three other infiltrators had crossed cross border tunnel in Ramgarh sector of Samba

On Feb 14, 2017 another cross border tunnel was detected in Ramgarh sector of Samba

On September 30, 2017 an under-construction trans-border tunnel  was detected in Arnia sub-sector of RS Pura