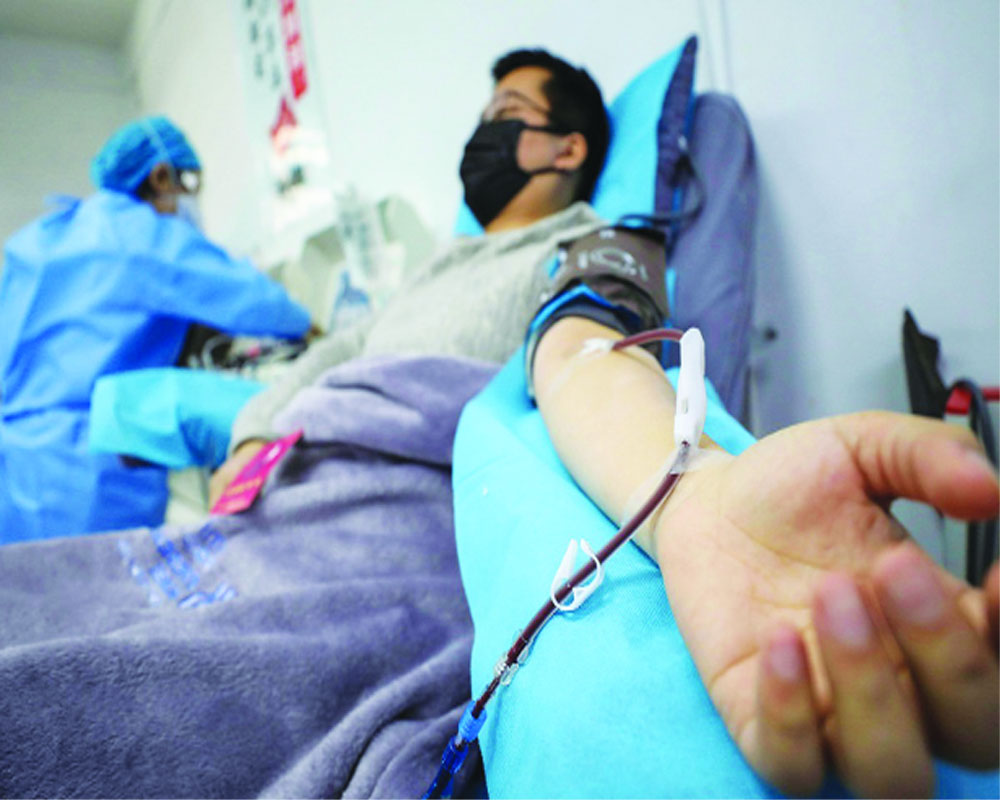 Facility at ILBS to begin tomorrow

The Delhi Government will start a plasma bank at Institute of Liver and Biliary Sciences (ILBS) hospital in South Delhi for treatment of Covid-19 patients, announced Delhi Chief Minister Arvind Kejriwal on Monday.

Urging those recovered from corona to come forward and donate plasma, Kejriwal said setting up of the plasma bank by the Delhi Government to treat the Covid patients is the first of its kind initiative in the country.

Plasma bank will start from Wednesday.

According to the State Health Department officials, around 34 out of 35 patients have recovered because of plasma therapy in the LNJP and 46 out of 49 patients have survived due to this in private hospitals.

“Until a few weeks back, there was a shortage of beds in Delhi. People started struggling for beds during the first week of June, and people were running from hospital to hospital in search of beds. I used to receive calls late at night, and I used to be awake all night to get beds arranged for the people in different hospitals. In the last month, we took various steps because of which there are a sufficient number of beds in Delhi. Now, there are 13,500 beds in Delhi, out of which 6,000 beds are occupied and 7,500 remain vacant,” said Kejriwal.

“But in the last few days, I have observed that there is chaos regarding the high-demand for plasma therapy in Delhi. I am now getting calls from people asking for plasma trials for their relatives and family members who are admitted to hospitals. Around two months ago, Delhi was one of the first States to start plasma therapy trials. In the first phase, we conducted plasma therapy trials on 29 patients, and you may remember that the results were very positive,” he added.

“Even after obtaining permission from the Central Government, our biggest challenge was arranging plasma for every patient. Plasma can be donated by people who have recovered from corona. There are antibodies in their blood that save them from corona. If these antibodies are transfused into other corona infected patients, the patients also start recovering quickly from corona,” he added.

“I want to make it clear that plasma is not the ultimate cure of corona, not all lives can be saved by it. It is extremely difficult to save the patient who is in his last stage of infection, is suffering from multi-organ failures and extreme co-morbidities. But it is helpful for patients with moderate symptoms, mainly those whose condition is not serious yet.

The Delhi Government will set up a helpline in which potential plasma donors can call or WhatsApp. They will be contacted and all arrangements of the donation will be made accordingly.

He also said the health officials from the Government would also start calling recovered Covid-19 patients and convince them to donate plasma.

Kejriwal said, “The antibody tests will be conducted in Delhi to avail information on the antibodies level in the patients who have recovered from corona. As per the records, there are 52,000 people in Delhi who had corona, recovered from it, but they did not even feel it.”

“Media has a huge and very important role to play in this initiative. There should be no politics on the matter. We have to save every life, be it from any caste, class, religion, or party. This also includes people from all professions. I want to request my media friends to run campaigns to inspire and motivate people to donate plasma and save more and more lives in the coming days,” he added.