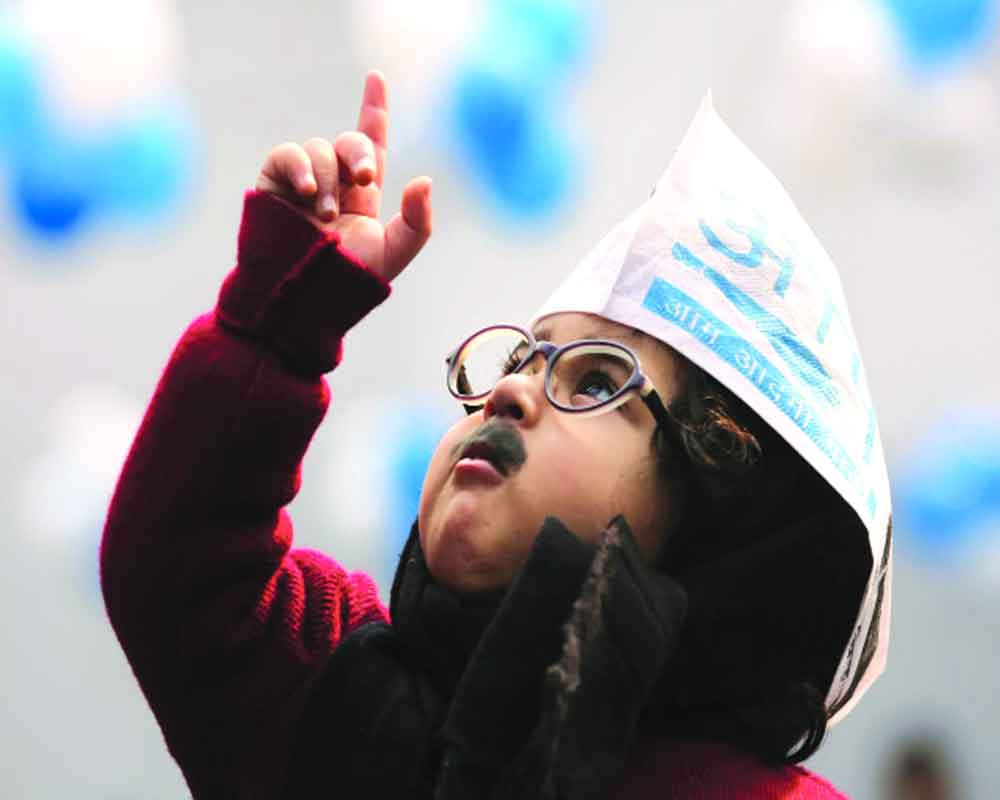 Mini Mufflerman” Avyaan Tomar — who stole the hearts and was a rage on the social media platform by dressing up as Delhi Chief Minister and AAP convener Arvind Kejriwal — will be a special invitee at the swearing-in ceremony of Kejriwal at Ramlila Maidan on February 16.

However, the party said no Chief Minister or political leader from other States will be invited for the ceremony that is going to be specific to Delhiites.

An AAP functionary said Tomar has been invited for the oath-taking ceremony. Tomar, who is two-year-old, grabbed the headlines after he was spotted at the party office on the counting day, dressed like Kejriwal — with spectacles, party cap, a sweater and muffler. Many had clicked his picture that day.

The child even sported a moustache like the AAP chief. Avyaan lives at Mayur Vihar in East Delhi. His father Rahul Tomar is an AAP supporter.

After AAP’s Twitter handle posted image of “Mini Mufflerman” wearing spectacles similar to the AAP chief, it went viral within a short span of time winning hearts of users. “He will be the CM one day (with a heart eyes emoji),” wrote a user. “Adorable” and “so cute,” wrote others.

While inviting Delhiites to attend his swearing-in, Kejriwal said, “I look forward to your continued support and conviction that together we can take this model of governance to people across our country.”

He said education, healthcare, water, electricity, women safety and empowerment, among others have now become winnable, mainstream electoral issues. “Thank you for believing in us and for reposing your faith and generous support, without which we would have not been able to achieve any of these successes,” Kejriwal said. “Delhiites, your son is going to take oath as Delhi Chief Minister for the third time. You must come to bless your son. Sunday, February 16, 10 am, Ramlila Maidan,” Kejriwal tweeted in Hindi.

The AAP won 62 seats in the 70-member Delhi Assembly, while the Bharatiya Janata Party (BJP) bagged the remaining eight seats.

The Congress drew a blank for the second consecutive time in the Delhi Assembly polls. AAP’s Delhi unit convener Gopal Rai said Kejriwal will take oath with the people of Delhi who have reposed their faith in his leadership, Rai added. “In 2013 and 2015 as well, no political leaders and Chief Ministers from other States had been invited for Kejriwal’s oath ceremony,” he said.