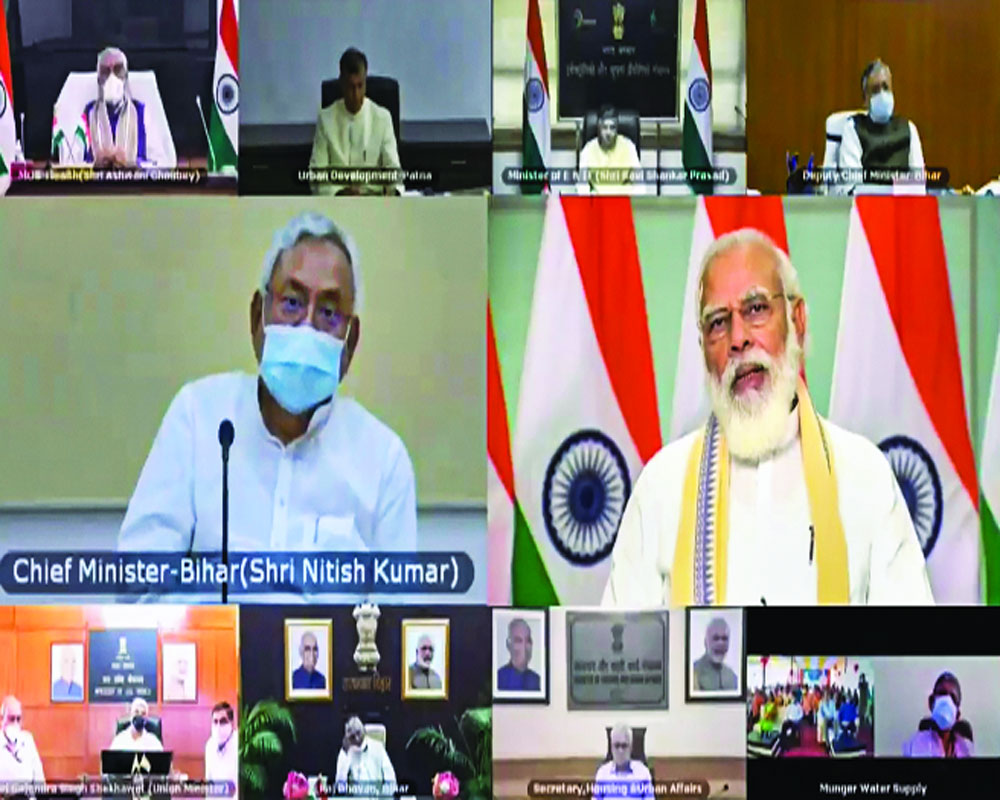 On Visvesvaraya jayanti,  PM says Bihar significantly contributed to development of the country by producing millions of engineers

In the run up to the Bihar Assembly elections, Prime Minister Narendra Modi on Tuesday inaugurated another set of infra structure projects worth Rs 540 crore for the State through video conference in the presence of Chief Minister Nitish Kumar.

The projects include sewerage treatment plants at Beur and Karam-Leechak in Patna city, as well as water-related projects in Siwan and Chhapra under the “AMRUT” Yojana.

Apart from this, the PM laid foundation stones for water supply projects in Munger and Jamalpur and River Front Development Scheme under Namami Gange in Muzaffarpur.

The Prime Minister said even during the times of corona, the work on various development projects progressed uninterrupted in Bihar.

Kumar and Deputy Chief Minister Sushil Modi assured that projects will be completed on time.

The Prime Minister on Sunday inaugurated a slew of petro chemical projects worth Rs 940 crore in the poll bound State.

The PM lauded the contribution of the engineers to the development of the country on the occasion of Engineer’s Day, which is celebrated  in the memory of India’s pioneering modern civil engineer, M Visvesvaraya. Modi said Bihar also significantly contributed towards development of the country by producing millions of engineers. Modi said Bihar is the land of historical cities and has a rich heritage of thousands of years.

After independence, Bihar was led by visionary leaders who tried their best to remove the distortions which developed during the era of slavery.

He said thereafter there was a lopsided development with changed priorities which resulted in urban infrastructure degradation and collapse of the rural infrastructure in the state.

The Prime Minister said when selfishness overtakes governance and the vote bank politics come into play then the already marginalised and deprived would be the most affected. He said people of Bihar have endured this pain for decades when the basic needs like water and sewerage are not met. He said people contract diseases by drinking dirty water under compulsion and a large part of his earnings goes to treatment. Under these circumstances, a very large section in Bihar had accepted debt, disease, helplessness, illiteracy as their fate.

The Prime Minister said in the last 4-5 years, lakhs of families have been provided access to drinking water in the urban areas of Bihar under the Mission AMRUT and State Government schemes. In the coming years, Bihar will be among those states of the country, where every house will have piped water supply.