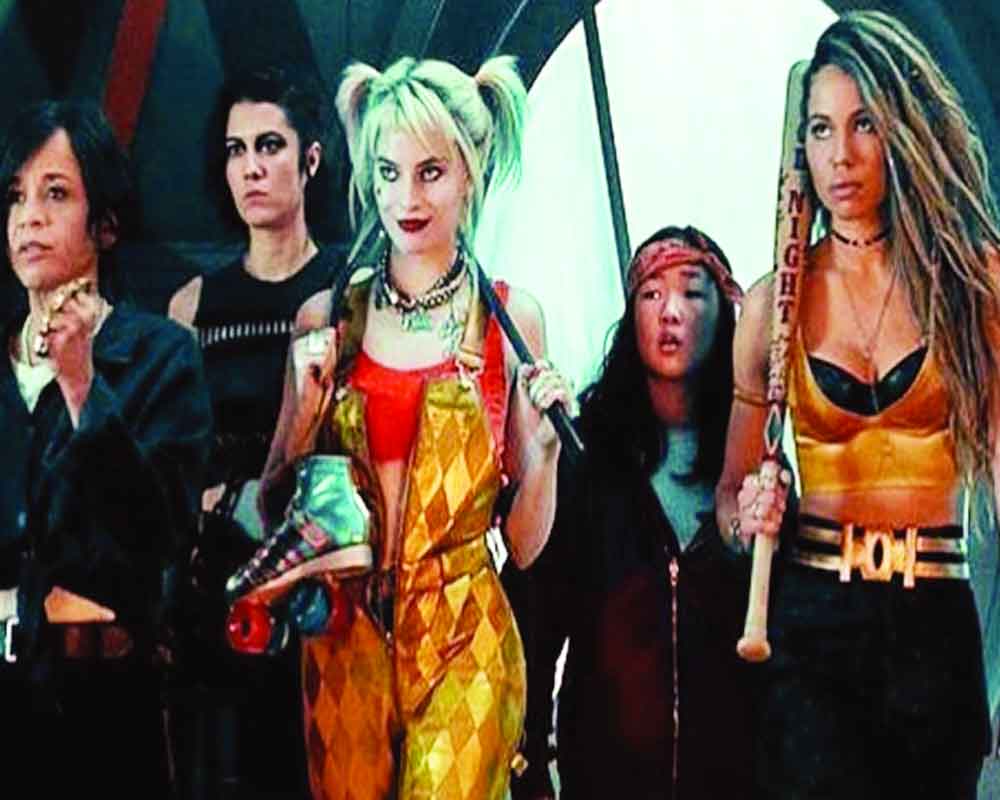 Where super villains and their villainy go, the racy violence, the cranky pace of the motion picture, the hard and fast changing rules of survival and, of course, the will to be on the top of the game, that too in style, dot the landscape of crime and action.

In this one from the Marvel blockbuster outlet, all this and more is attempted to be doused in woman emancipation and empowerment through catty fights and a troika coming out of the maze of male superdom with a snazzy narrative and a psychedelic dive into the crime world of old-world New York.

Marvel generally endears and ensnares with its heroes and villains but this one is hyperly feminist and deals with Joker’s girlfriend driving a force of life that needs her own brand of killer instinct in a world where other super crime bosses are after her life in the absence of her loony, abusive, overpowering Mister J who used to keep her on her toes when he inhabited the spectrum.

But now that he is not there, the Joker-free Harley Quinn devises her own scatterbrain combat plan to keep you sometimes interested, sometimes irritated through the film which is actually quite a screech that may ultimately annoy you no ends.

Having said that though, Margot Robbie and her pigtailed appearance along with her female partners in crime define personalities on edge driving you mad too with their antics soaked in violence, deceit and me-first concoction.

This super villain, despite the best effort, fails to draw in the juice as most Marvel movies do. It is not even about Joker but his catty, red lipstick bearing outlandish blond girlfriend who has been emancipated and has to float in the upper echelons of the criminal world edging out male domination. High pitched music, all over the place voice-over to the staccato visuals, fight scenes that make you feel like the bird of prey and a female get-together that is highly unstable is not the coolest idea of a blockbuster one might say.

In order to truly understand, be involved and find a connect with Shikara, the latest movie directed by Vidhu Vinod Chopra, one has to undergo what the Kashmiri Pandits from the Valley went through in the early 90s. As the credits role at the end of the movie, this film is dedicated to his mother Shanti Devi, who left J&K never to return.

One is surprised that the director took so long to tell a story on a subject that is so close to home. However, the reel is totally removed from what really the Pandits from the Valley had to endure when they left their homes — leaving everything behind them. The generations of legacy, home and business. They became refugees in their own country, the minute they crossed Banihal Pass. How they were looked down upon by the rest of the people, how they had to pick up the pieces of their life and build it from scratch, has not been done justice to.

Shikara, sadly only gives a tiny peek into what really transpired. Hence, even though the subject is touching, there is little that people not from the region will find to connect.

Unleash the madness, so goes the tagline for this Mohit Suri directed Malang. The director who has movies like Aashiqui and its sequel and Ek Villain to name a few has kept to his true format — a love story where the hero is on a self-destructive path. In this regard, Malang is no different, just the backdrop is different — Goa and its drug underbelly.

However, this is not the first movie with this setting. The director could have chosen to tell a different story. We are somewhat tired of watching the hero wronged and walk the revenge path.

But not all is lost here. The hero Aditya Roy Kapur is all buffed up — six-pack abs and shirtless to boot; maybe he can give our bhai a run of his money. Then there is Kunal Kemmu. He has definitely reinvented himself in this film. As Michael Rodriguez, his performance is worth a mention since the actor is known to do comic roles with aplomb. Sadly, in an era where content is hero, Malang doesn’t have much to offer.