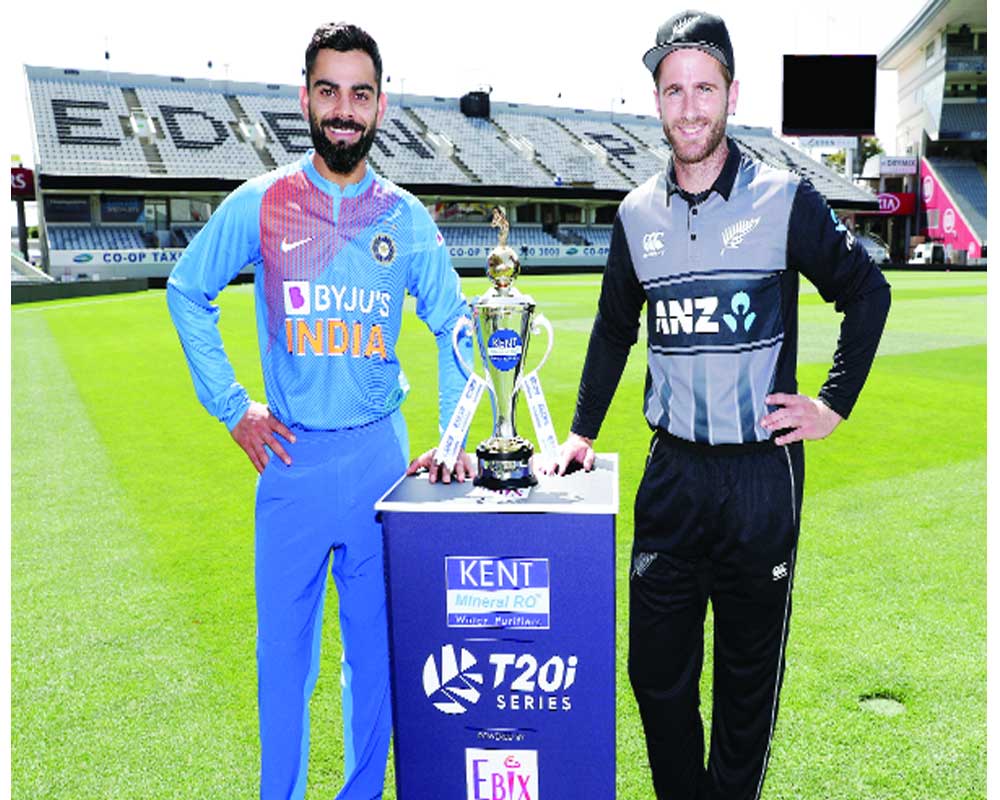 Preparations for the World Cup on top of their agenda, India will take on an injury-hit New Zealand in a rare five-match T20 International series starting today during which seam-friendly wickets would be a major challenge for the visitors.

Unlike most overseas tours, this will be a quick start for the Indian team. The team arrived in Auckland on Tuesday and Thursday was when they hit the nets ahead of the tour-opening game.

On the plus side, this hectic schedule helps the team management maintain consistency in team selection as they continue experimenting across the available squad in a World Cup year.

Despite injury issues to key white-ball personnel like Shikhar Dhawan, Hardik Pandya, Deepak Chahar and Bhuvneshwar Kumar this past home season, the bench strength has come across adequate and raring to go for challenges ahead.

It begins at the top where KL Rahul has stepped up as a key part of India’s white-ball plans.

Skipper Virat Kohli dropped hints that Rahul’s newfound confidence in his dual role as batsman-keeper has given vital options to the team.

According to Kohli, Rahul will continue to keep wickets in both ODIs and T20Is, but will open in the shortest format while returning to the middle-order in the 50-over format.

It could mean that Prithvi Shaw is being primed for an ODI debut and a potential pairing with Rohit when the three-match series begins on February 5.

The skipper also indicated a change in middle order plans. With Rahul keeping wickets, the fit-again Rishabh Pant could lose his spot in the playing eleven.

Manish Pandey is expected to play as the fifth specialist batsman and Shreyas Iyer will regain his spot at number four.

Pandey, Iyer and Pant batted together in the nets on Thursday, while Sanju Samson hung around, only to pad up later on. The Kerala batsman didn’t seem to be in contention for the first T20I.

Pant and Pandey could both fit into the playing eleven should India opt for five bowlers and leave out the sixth option in Shivam Dube. Washington Sundar and Ravindra Jadeja are the other two all-round options.

The Yuzvendra Chahal-Kuldeep Yadav combination is yet to play a game together since the 2019 ODI World Cup, and it remains to be seen if things will change in this aspect.

In the pace department, Mohammed Shami and Jasprit Bumrah are assured starters, while the toss-up will be between Shardul Thakur and Navdeep Saini.

Despite the recent good record in the shortest format, there is a downbeat mood in the hosts’ dressing room thanks to the 3-0 shellacking received in Australia over the past month.

It hasn’t helped matters that the disappointing loss to their trans-Tasman rivals has raised questions about Kane Williamson’s future as captain.

For the moment, New Zealand’s leading batsman is happy to lead the side across all formats, but his position is up for review after the shattering defeat to Australia.

As always, they have a dearth of all-rounders to choose from but need to balance with pickings in the pace department, which is missing the services of Trent Boult, Matt Henry and Lockie Ferguson owing to injuries.

It remains to be seen if the Black Caps opt for two spinners in Ish Sodhi and Mitchell Santner given the really short boundaries at Eden Park, venue for the first two T20Is.