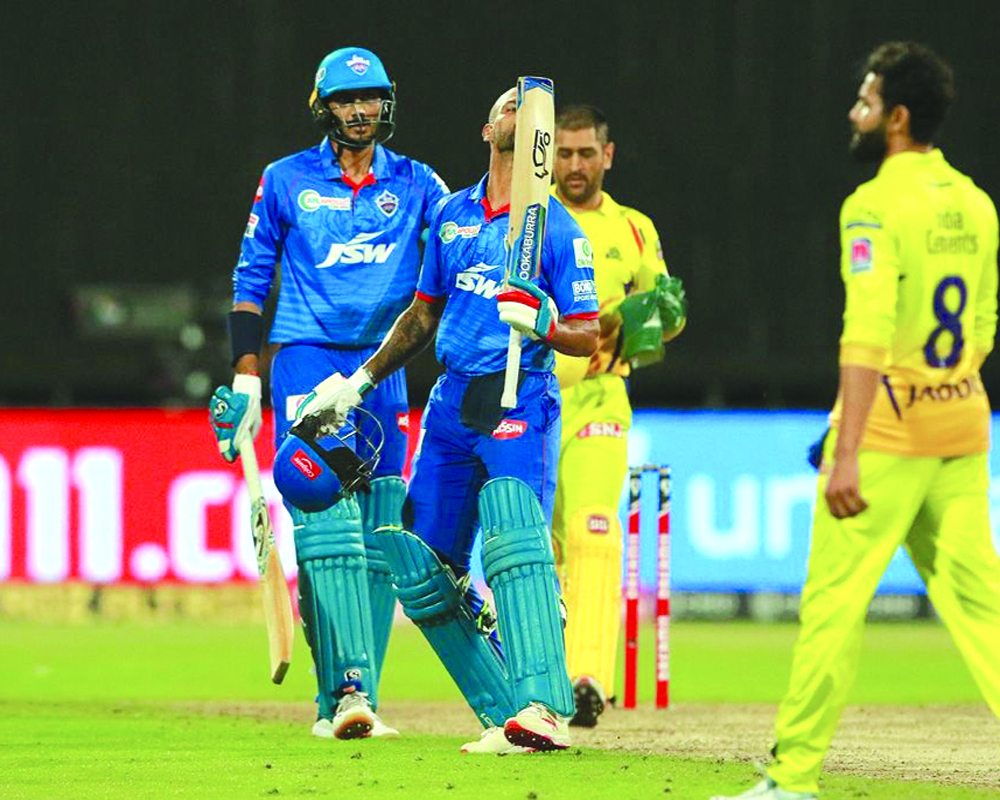 Dhawan peaks with maiden ton, Axar makes a clean sweep for Delhi to top the table

Spared by the fielders a number of times, opener Shikhar Dhawan (101) hit his maiden IPL hundred while Axar Patel pulled off three sixes in the final over as Delhi Capitals moved to the top of the table with a tense five-wicket win over Chennai Super Kings, here on Saturday.

Dropped on 25 and 79, apart from surviving a half chance and a run-out opportunity, Dhawan made full use of the lives given to him to raise his best IPL knock as the Capitals overhauled a stiff 180-run target with one ball to spare.

On 99, Dhawan also got a caught-behind decision reversed, using DRS. Despite a well-set Dhawan at the crease, Sam Curran bowled an exceptional 19th over, giving away just four runs to keep CSK in hunt.

Capitals needed 17 runs off the final over and it looked Dhawan’s effort could go in vain but Axar Patel played a blinder of a knock, hitting three sixes off Ravindra Jadeja to finish off the game in style.

DC now have 14 points from nine games, one more than second-placed Mumbai Indians (12).

Dhawan took 58 balls for his unbeaten knock that was studded with 14 shots to the fence and one over it. He shifted the gears with ease as he not only worked the ball around but found boundaries consistently to keep the asking rate under control. His straight six off Curran stood out.

Skipper Shreyas Iyer (23), who hurt his shoulder in the previous game was not his usual aggressive self. The fluency with which he times the ball was missing.

His 68-run stand with Dhawan ended when he holed one out to Du Plessis off Bravo. It was a slower ball but Iyer could have dispatched that easily into the empty stands on any other day.

Earlier, Faf Du Plessis hit his fourth half-century of the season before Ambati Rayudu produced another useful cameo as a collective batting effort propelled Chennai Super Kings to 179 for four.

Rayudu hit 45 off 25 balls while Ravindra Jadeja hit four sixes in his fiery 33-run knock. One of Jadeja’s sixes landed on the road outside the stadium.

They added 50 runs in 3.3 overs during their unbeaten fifth wicket partnership.

While Watson relied on safe ground-strokes considering the sluggish track Du Plessis did not hesitate to improvise, playing a lot of scoop shots. He pulled the short ones with ease.

The Capitals batsmen did not let off-spinner Ravichandran Ashwin take advantage of the slow surface, taking easy runs off him.

Rabada sent back Du Plessis while Nortje got rid of rival skipper MS Dhoni (3) but Rayudu and Jadeja helped the side reach a competitive total.