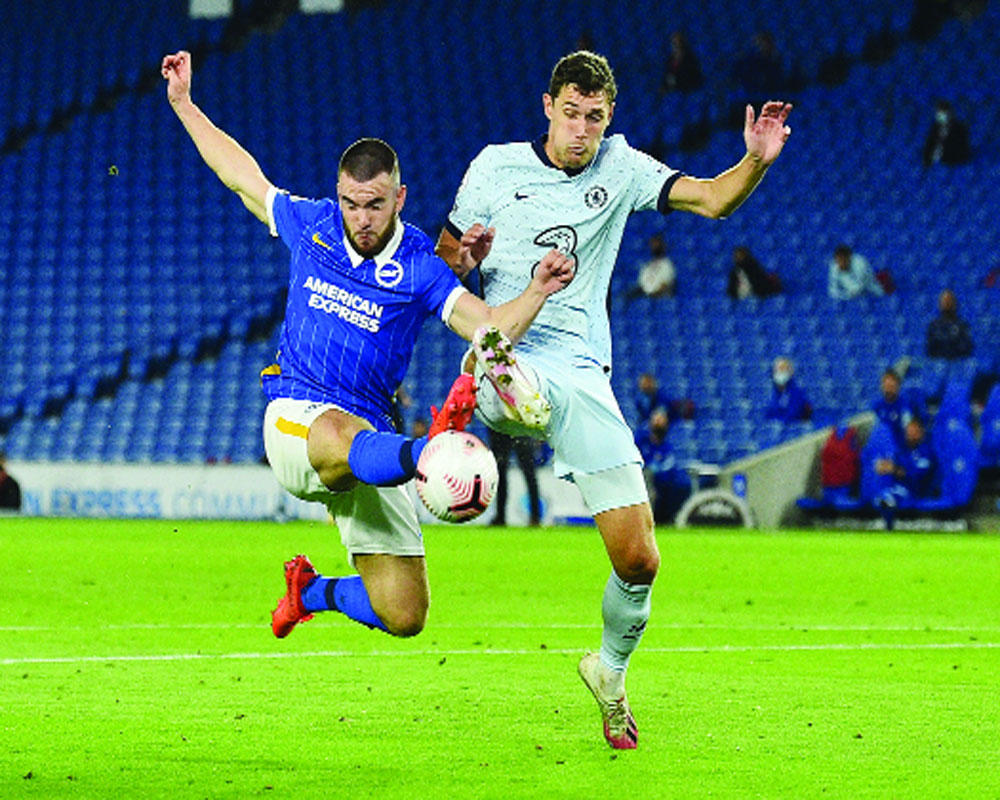 A Chelsea team featuring just two of its slew of high-profile and expensive signings got off to a winning start in the English Premier League by beating Brighton 3-1.

Timo Werner and Kai Havertz - signed for a combined $160 million - didn’t manage to score at Amex Stadium, either, with Chelsea’s goals coming from Jorginho, Reece James and Kurt Zouma.

James’ was the most spectacular and the most crucial, the right back’s swerving piledriver from 30 meters regaining the lead for Chelsea at 2-1 in the 56th minute, just two minutes after Brighton equalized through Leandro Trossard.

Zouma’s deflected volley from a corner in the 66th then gave Chelsea some breathing space.

“I thought we were OK,” Chelsea manager Frank Lampard said. “I liked the work ethic and discipline of the team.

“We have been together for four days. ... To expect everything to click on day one would have been difficult.”

While Havertz was fairly ineffective in his position on the right of midfield, fellow Germany international Werner - the lone striker - was more impressive and earned the penalty that was converted by Jorginho to break the deadlock in the 21st minute.

Brighton midfielder Steven Alzate lost possession in central midfield as the hosts tried to play the ball out from the back, Werner was played through and was brought down by goalkeeper Mat Ryan. Jorginho sent Ryan the wrong way.

Much-criticized goalkeeper Kepa Arrizabalaga was handed a start by Chelsea manager Frank Lampard but his failure to keep out Trossard's 54th-minute shot from outside the area will likely keep the scrutiny on him. Kepa seemed slow to get down as the ball squirmed beyond his outstretched right hand.

James quickly put Chelsea back in front with a stunning strike that flew into the roof of the net, and the right back sent in the corner that Zouma met with a volley that ricocheted in off Brighton defender Adam Webster’s right foot.

Of Chelsea’s other offseason signings that combined to cost $250 million, left back Ben Chilwell and playmaker Hakim Ziyech were injured and center back Thiago Silva wasn't ready after only recently joining up with the squad.

“The players are still working each other out a little bit,” Lampard said. “Today we weren't as fluid as we could be .. I want us to have a lot more movement up front than we did today.”