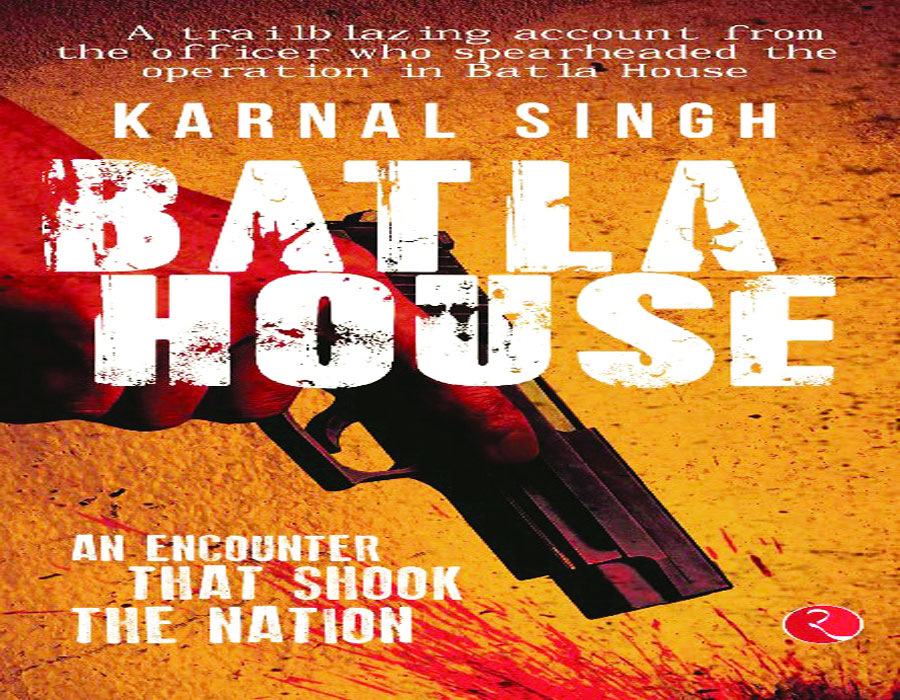 BATLA HOUSE: An Encounter That Shook the Nation

Batla House enlists the details of an anti-terror operation and lives in uniform. It also puts to rest a lot of controversies and versions on the infamous Batla House encounter, writes J Gopikrishnan

The book Batla House written by former police officer Karnal Singh is a real thriller and gold mine of information on the anti-terror operations, history and great analysis on the terror outfits targeting India. Karnal Singh (IPS) who retired as Chief of Enforcement Directorate was the Chief of Special Cell of Delhi Police which conducted the encounter with Indian Mujahideen (IM) terrorists at Batla House in Delhi in September 19, 2008. The terrorists were hiding in a flat in Batla House after unleashing a series of terror attacks in various places in Delhi six days ago on September 13 evening by placing bombs in waste depositing boxes, which killed 22 people and injured more than 130 people. There were lot of controversies and different versions and even a movie was produced on the Batla House encounter, which was the finest precision operation of the Special Cell, the counter terrorism unit of Delhi Police.

After 12 years, the writer — Karnal Singh — the man who headed the encounter is declassifying the details of country’s much talked about encounter operation. Apart from thrilling moments of the encounter declassified by the very man who conducted the operation, the writer explains how his trusted deputies cracked the case within six days of the serial blast which shook the Delhi on September 13, 2008 evening. This book also details the personal life of police personnel and their sacrifices in family life for the Call of Duty for the Nation.

Singh goes in detail about the life of his team members of the Special Cell, where the life of the policemen is always 24x7. The blast day was a Saturday and the writer, who was then Joint Commissioner and head of the Special Cell of Delhi Police, was helping younger son in solving Maths problems. While rushing to the blast spot hearing the serial blasts in Delhi, he tells wife to call elder daughter, who was in the city enjoying weekend with friends, back home. In six days of hectic work, team cracked down the hiding terrorists. There are many tearful moments in the book when the writer talks about late Inspector Mohan Chand Sharma, who lost life in the encounter.

On September 18, a day before the operation, Singh recounts getting calls from wife reminding him of their elder daughter’s birthday. That very day, the writer learns (from other colleagues) that the key officer Mohan Chand Sharma’s son was in intensive care unit with acute dengue and dipping platelet counts. When he asked Sharma, the officer dimissed it saying wife and parents were taking care of the child, and got back to work. ACP Sanjeev Kumar Yadav who led the back-end team in the operation was facing tussle with wife due to his late hours. On the day of the operation too, he had fought with his wife and upon getting a call from office did not think twice before leaving his wife mid way to rush to office.

The writer details the lives of all his team members giving due credits to them, which is very rare in service stories. From constables to officers, the book details their role in the operation — unearthing the location of the hiding terrorists by tracing emails and mobile phones, using human intelligence, analysing the previous blasts in Jaipur, Ahmedabad, Surat etc. The writer acknowledges the role of each team mate checking the blast sites, explosive materials, forensic work and digital mapping to the person and how they undertook the recce operations before the shootout.

The writer clears all the doubts on the Batla House encounter in the minds of many for the past 12 years. There were many questions including why Sharma was not wearing a bullet proof jacket. In their defence, it was a secret operation and the main team was disguised in plain cloth shirts. Batla House is a crowded area and densely populated by Muslims. As it was the festive season, the team decided to strike in the day, as many would be trying to catch up on sleep post night celebrations. Singh and team reached the spot upon hearing about the bullet injuries of Sharma, requisitioning more force and commandos. He details how he entered the encounter spot with a small team, weaving their way through narrow bylanes, past angry crowds.

This book exposes the dark side of Indian politics that works on appeasing minority vote bank. As all the terrorists belonged to a community and hailed from Azamgarh in Uttar Pradesh and shoot out location was a densely Muslim populated location in Delhi, the entire political vultures were parading in the Batla House.

This book is full of so many interesting stories. One terrorist, who left the scene in the morning, got so frightened upon hearing the news of the encounter that he landed at a TV channel for live show in the evening. Nine bombs had been planted and explosion and diffusion took only in eight areas only. Explosion happened at five areas and bomb diffusion happened in three areas. One bomb did not work and could not be identified. The email claiming the role by Indian Mujahideen (IM) sent to media houses after the first blast claimed nine spots. Book also explains back ground of many terrorists, their role in money making by engaging in kidnapping for ransom, apart from role of radicalising agents.

The writer explains tough laws for dealing with terrorists. One such example is two days after the Delhi Blast, one terrorist Aftab Ansari (already facing death conviction jailed in Kolkata for 2002 American Centre) sent message to Singh saying he wanted to give details of the Delhi blasts. He had been caught by Singh in Delhi in 1995 and was jailed for some years. Once out of jail, he masterminded the American Centre blast and is now facing death conviction from 2005. After consulting Intelligence Bureau, Singh decided not to meet him in Kolkata jail. This episode shows how flimsy are our laws in dealing terrorists and Ansari is still on appeal against the death conviction. The writer argues for different rules while arresting a person involved in terrorist cases. He says civilian norms on arrest can’t be applied to a terrorist, explain the loopholes in it. When a person is arrested, police is mandated to inform relatives or near and dear ones. This is helpful for the other accomplices in the terror operations.

Singh explains the need for the maximum possible information to be shared with media to avoid fake and wrong stories. He explains in detail, how Delhi Police suffered bad press due to the stoppage of press conferences by Home Ministry and how he managed to handle the media by calling people to provide right things.

He narrates how a lady journalist and her journalist husband gave valuable inputs on tackling wrong reports being spread in media. The writer explains how he met the Jamia Milia University Vice Chancellor and appraised the exact information. Earlier the Vice Chancellor declared legal help as some students were arrested. Actually the terrorists were living in garb of students and were doing private jobs. After an explanation by Singh and DCP Alok Kumar with all evidences, the Vice Chancellor changed the mind. The writer also explains how he convinced then Union Minister Kapil Sibal with all details, when many ruling party leaders were questioning the Batla House encounter, as Delhi Assembly elections and Lok Sabha elections were nearing. Sibal appraised the facts to Prime Minister Manmohan Singh that day itself.

Apart from the thrilling narration of a detailed probe on the blast and identifying the hidden terrorists in six days and executing encounter in a crowded area, that too in daylight, this book explains many others aspects of policing.

This book is a classic book to be placed in Police academies and libraries for reference as it explains how to handle operations and future cases on human rights violation allegations and how to conduct trials. The book also details the history of terror outfits like SIMI, HuJi, IM and their linkages with Pakistan and its ISI funded training and how they radicalise the youth to work against India. Let us hope more declassifications will come from Singh in the future through more books.