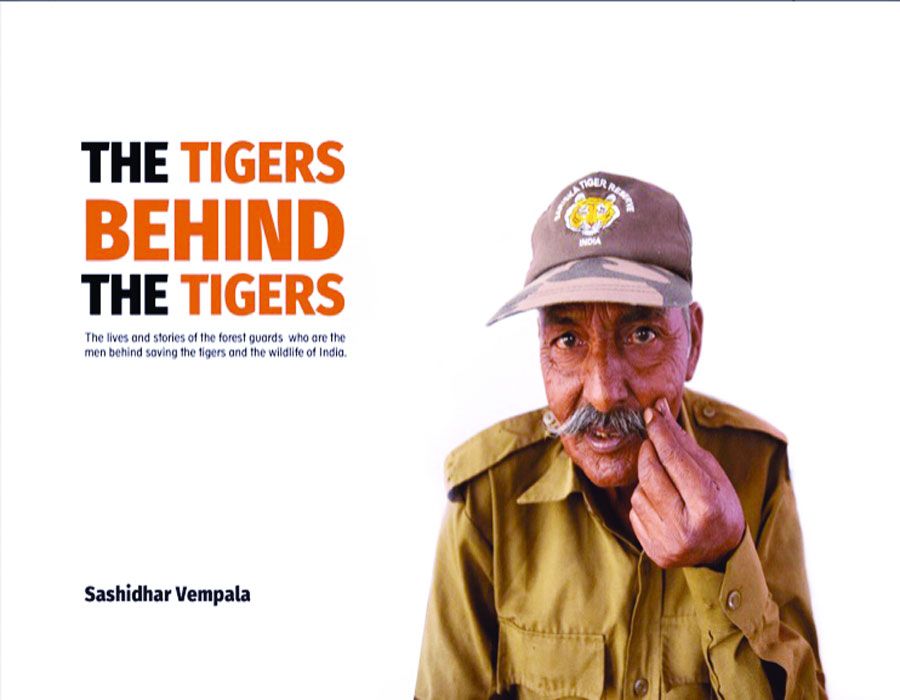 Sashidhar Vempala’s book is about the lives and stories of the forest guards who are the real men behind the tiger conservation and the wildlife in India, writes Deepak Kumar Jha

The story of India’s wildlife success is incomplete, unless its frontline warriors are part of it. They are the first line of defence in protecting India’s precious natural heritage and safeguarding its ecosystems. According to Sashidhar Vempala, author of first of its kind coffee table book, titled The Tigers Behind the Tigers, these men and even women are the unsung heroes of India’s conservation success story. Vempala is an acclaimed wildlife photographer, documentary filmmaker, conservationist and a sustainability professional. His films on conservation topics and human wildlife conflict, have won awards at international forums.

The book talks about the lives and stories of the forest guards, who are the real men behind the conservation of tigers and the wildlife of India. The gist of six chapters of the book is that these men in khaki, patrolling the jungles are the real reason the tiger survives today.

All over India, 1,75,000 men and women serve the forests of India, 24x7, striving to protect the amazing natural habitat. Several lose their lives battling poachers of both wood and animals, many are seriously injured in animal attacks, but they go on with a courage and valour that is inspirational. They have learnt the ways of the forest, the sounds, the animals tracks, the secrets and a sense of fearlessness, always bumping into the wild and that too, dangerous ones when on foot.

This book, published during the Covid pandemic lockdown period, is a collection of pictures and the stories captured during Vempala’s work with them and hence it’s a tribute to these frontline forest protectors, who are always at the frontlines of wildlife protection in our country.

In a recent conversation with Agenda, Vempala raised apprehensions about the possibility of the big cat being susceptible to Coronavirus when Jim Corbett National Park built quarantine wards. “But what about the forest guards? Are they still on duty?,” asked Vempala. But then he goes on to say most guards are under permanent lockdown anyway.

Vempala in his book says each forest has a legend and even the vehicles have their stories. He refers to one such instance in the department bus at Kabini which has many untold luck stories. Many, who cannot afford the exorbitantly high costs and monopoly of Jungle Lodges and Resorts, have to take this bus. The bus is considered extremely lucky in terms of a good sighting of the wilds when on board.

Each chapter deals with the importance of the frontline workers, who have made it possible to help tigers, lions, elephants, rhinos etc grow in numbers for decades. Saving Tigers on Land, Saving Tigers in the Mangroves, Some Fauna They Save, Human Elephant Conflict, Conflict Within and the Godspeed are the titles which deal separately on subjects and issues like economic valuation of the tiger reserve, gene pool protection services, carbon sequestration, zone of influence outside the reserve, anti-poaching camps, the Sunderbans mangroves, some keystone species saved by the fauna alongwith hundred images.

While the book has notes on Kaziranga, a separate chapter makes for an interesting read on the human elephant conflict. Vempala talks about a case study in West Bengal where he mentions that for many centuries, elephants have roamed the forest of South West Bengal which has no natural elephant/animal corridor. Yet, the elephants have passed on their knowledge of the routes to their young ones.

Previously, the size of herd of elephant was small —15-20, and total numbers of elephant that roamed the zone was between 30 and 45. This was for the period 1970s-1980s when the forest cover was degraded to some extent. But in recent time, in the last 35 years, the zone has improved considerably in terms of green cover and the numbers of elephants have also increased to more than 100.

The author narrates the stories of women officers taking care of Nature comprising the wild, the greens and the humans and their vested interests in keeping the cycle going. “No one wants to give up what they get and that’s why the solution can only be collective and not conflicting,” Vempala narrates, highlighting that the conflict needs immediate mitigation and the protectors need their powers.

While it is understood that animals look for their own meals, there is an interesting chapter on how the wild have their dedicated cooks who besides making their own meals, also cook for small animals to mighty elephants of the jungles.

In the last chapter, Vempala rues about the paltry wages of the guards risking the lives. World over, every year, more than 100 rangers are killed in the line of duty. India loses more forest rangers each year than any other country in the world. Yet, a forest guard in India is rarely felicitated or celebrated.

The book urges us to acknowledge the work of the forest frontiers and details how they work around the clock; what is a forest guards’ life like and how they ensure that the tiger and all other wildlife is protected in the forest. The book also mentions that the forest reserve runs on acute shortage of manpower and of available approved positions, they operate at 60 percent, going to as low as 30 percent in some lesser important reserves. Daily wagers form the bulk of the frontline forest force and they supplement the permanent staff of guards and foresters.

Such is Vempala’s passion for the constituents of forest, that he founded a nature conservation organisation — Guardbook Conservation Foundation — which works towards forest conservation and supporting the forest guards of India in their duties. Guardbook helps the forest guards not only with boots, jackets and torches but also with powering up camps with solar energy, setting up rainwater harvesting pits and a lot more.