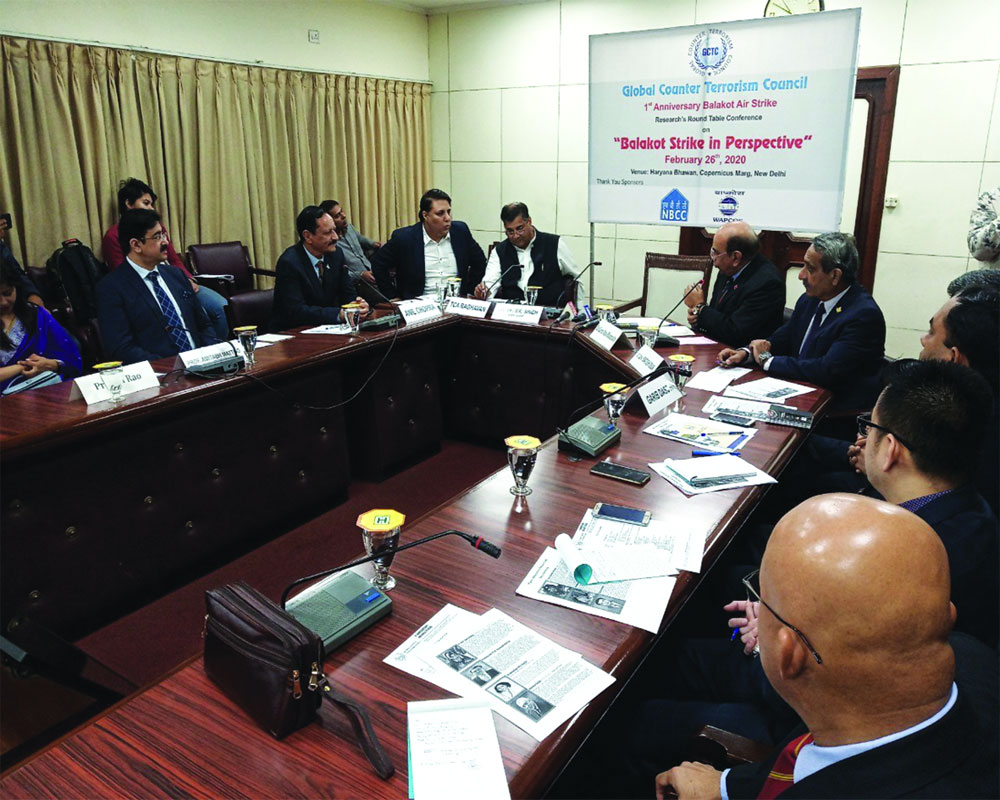 The Balakot operation may not have stopped terrorists altogether, but it definitely sent a strong message to the international community, especially the one having ambiguous stand on terrorism, to make amends, writes Sanjana Mohan

Recently, when US President Donald Trump was in India with the agenda to push the Indo-American strategic and trade relations to new heights, there was unrest in the Capital, with North-East Delhi being the worst hit by communal riots. The same period coincided with the first anniversary of the Balakot air strikes, in retaliation to the killings of 40 jawans who lost their lives when terrorists — aided and abetted by Pakistan — attacked an Army base in Pulwama. To mark the anniversary, the Global Counter Terrorism Council (GCTC) held a round-table conference with Lt-Gen Syed Ata Hasnain, former Air Marshal Anil Chopra, Lt-Gen Satish Dua, former diplomat TCA Raghavan, Prof Amitabh Mattoo and retired police officer Prabha Rao as speakers.

Taking part in the discussion, Lt-Gen Hasnain reiterated that we should not look at Balakot in isolation. “We must look at incidents which are happening today and the incidents which happened on August 5, when the Government of India revoked the special status granted under Article 370 of the Constitution to Jammu and Kashmir,” he said as he reminded how it was only after the Uri terror attacks that India started taking tangible action on terrorism generating from across the border. “It reduced the strength of terrorists quite significantly,” he said.

Another watershed development of the Balakot strike was that it called the nuclear hoax paddled way too often by the Pakistani political and military establishment. It exposed the myth that any Indian ‘misadventure’ would lead to a war, more so a nuclear one. The conventional wisdom was that with Pakistan well equipped with nuclear weapons, it was suicidal to cross the borders. And if ever that happened, it would lead to nuclear catastrophe in the subcontinent. Balakot proved it was a well-crafted lie. For, it showcased there is several layers of strategic and diplomatic actions between a punitive strike on terrorism and nuclear warfare.

Lt-Gen Hasnain also questioned the notion that with Balakot we have done enough to tackle terrorism. “Actually, the thought should be that we have just started,” he said. “Now what we need in India is more of strategic planning through research, for which information is an important domain. It’s our responsibility to convey our narrative just not internationally but to our nation too,” he said explaining that a conflict doesn’t mean one operation followed by victory. “There is a whole theory of conflict where first comes conflict initiation, then progression, then stabilisation, then transformation, then resolution and finally termination. And in this theory, Pakistan is always a nice conflict initiator but worst conflict terminator,” he added.

Lt-Gen Dua took the discourse to history and reminded that India had never been an aggressor. “If we see the greatest emperors and kings, most of them fought within the boundaries and never were they determined in conquering the world,” he said, adding that in order to safeguard the unity and integrity of the nation, “we should make ourselves strong and kinetic when required”. Gen Dua also explained the inner dynamics of the Pakistan Army and how it controlled almost every aspect of Pakistani life, including economy. “In Pakistan, about 52% of funds are used for and by the Army, and less than 1% for education,” he said.

Raghavan too emphasised the need to move back and take a wider look at Pulwama and Balakot and the general aspect of how we can deal with Pakistan on the issue of terrorism. “Often tactical operations can be used to convey strategic messages and that we have very well conveyed through Pulwama and Balakot, but despite that we also need to move back and see the wider context. Seeing this through historical and political prospective what Balakot did was to send the message to Pakistan very similar of the kind which was send to Pakistan in 1965,” he said

The former Pakistani High Commissioner too said that Balakot alone wouldn’t be enough to intimidate Pakistan to cut off its terror tentacles. While reminding that India has added an element of unpredictability in its response to Pakistan, he cautioned against the impression that Pakistan had been successfully intimidated. “The fact is there are no winners here,” Raghavan said, urging the Indian establishment to again go to the drawing board and draft new ways to engage with Pakistan. “It cannot be just through military or through tactical measures; the political and diplomatic issues need to be addressed with political and diplomatic measures,” he said.

Former Air Marshal Chopra lauded the political and military leadership for Balakot. He informed how this mission, which involved about 6,000 people, could be kept under the wraps for the international community. “It makes me feel proud that this mission which involved so many people and so many days of planning could be kept away from public eyes.”

The Balakot operation may not have stopped terrorists altogether. It may not have totally convinced Pakistan to shun the jihadi path. But it definitely sent a message, and a strong one, to the international community, especially the one having ambiguous stand on terrorism, to make amends. Post-Balakot, it became apparent to one and all this in ‘New India’ any terrorist misadventure on its soil won’t go unpunished. It’s, however, just the beginning. The Government of India must always maintain its vigil and further build its security apparatus to take on growing terror challenges and threats.