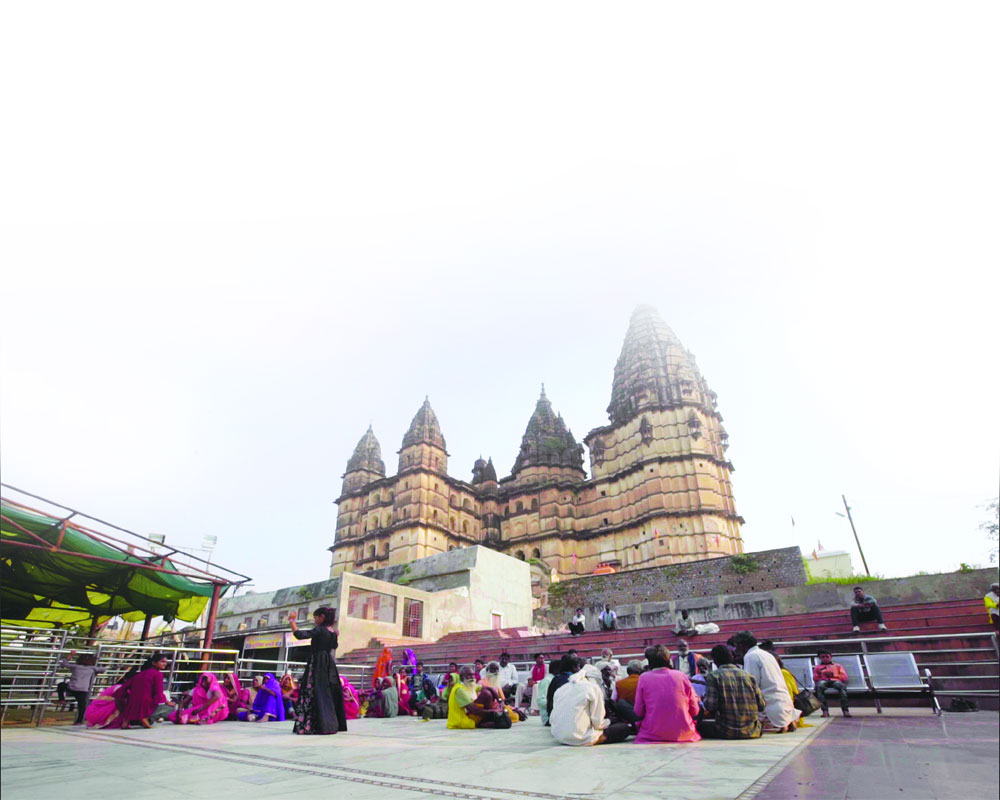 Even today, the ancient legend holds charm in the quaint town of Orchha, says Navneet Mendiratta, as she shares stories from a festival that celebrates the land of the glorious Bundelas, its rich history, culture and cuisine

The past six months have seen a lot of action in the sleepy town of Orchha in Madhya Pradesh, India. The kind that you see before a grand event about to take place. The roads, all levelled and repaired, look as good as new; signages are in place, homestays model a fresh look, decorated with local Gond art… the excitement is clearly visible. There is something about the mood that takes you into a flashback, to the legend of Lord Ram’s condition to the Bundela queen, that he be made the king, if she wanted him to leave Ayodhya and accompany her to Orchha. This condition also makes Orchha the only place in India where Lord Ram is referred to as Raja Ram and worshipped as a king. Even today, there exists a temple dedicated to him called Sri Ram Raja Mandir.

Situated on the banks of Betwa River, Orchha is located around 80 km away from Tikamgarh district in Madhya Pradesh and 15 km from Jhansi of Uttar Pradesh. Jhansi being well connected, and as the nearest railhead, you can easily drive down to Orchha once you reach there. Built by King Rudra Pratap Singh of Bundela dynasty in the 16th century, this ancient town is famous for its Chaturbhuj Temple, Orchha fort complex, Raja Mahal among others.

The bustling Orchha Fort complex houses several palaces and monuments. That Orchha is sheltered by thick forest is one of the main reasons that the age-old monuments continue exist in excellent condition. It is this well-preserved state, and a clearly visible Mughal influence in the Bundela architecture, that recently put this historical town in the tentative list of the UNESCO’s world heritage.

It is recorded that King Veer Singh Dev of Bundela dynasty was a close friend of Mughal emperor Jahangir and even gave him refuge as support in latter’s fight against Akbar. The Jahangir Mahal inside the Orchha Fort bears testimony to the royal hospitality extended to the Mughal king for a night. This four-storey architectural masterpiece is a mix of Muslim and Rajput architecture and has countless rooms with arched entrances, balconies and latticed windows that frame miniature painting-like views of the monument-studded riverbank outside.

The Raja Mahal, Sheesh Mahal and Rai Praveen Mahal are three other palace highlights that make this fort popular among the tourists. Of these, Rai Praveen Mahal has an interesting history. It is said that Rai Praveen was a courtesan in Bundela king’s court. So famous was the beauty of this courtesan that Emperor Akbar summoned her to his court in Agra.  It is said that upon reaching Agra, the intelligent courtesan composed a couplet for the emperor asking him why he should want to enjoy a meal that was already tasted. This earned her release to return home and a Palace inside the Orchha Fort.

Temples and chhatris of Orchha

Outside the fort, an impressive Chaturbhuj temple stands testimony to the King Ram legend. The story goes that after the grand temple was built, Lord Ram appeared in the queen’s dream, refusing to reside there. A section of the palace was then converted into the Ram Raja Temple, which continues to be worshipped so by people who come to pay respects to “King Ram” who rules Orchha. To date, no deity is worshipped inside Chaturbhuj temple.

A beautiful Laxmi Narayan temple is located very close to River Betwa, a 10-minute drive from the fort. Down the steps of the temple, along the banks of the river, are located the chhatris or the cenotaphs of the Bundela rulers. Fourteen in number, these chhatris are made in stone with domed ceilings, reminding you of a mix of Mughal and Hindu architecture.

Cut to present, the banks of Betwa river next to the chhatris came alive to the strains of Indian classical music and dance,with legendary Hindustani classical vocalist Shubha Mudgal opening the cultural evening with a soulful rendition of a bandish dedicated Lord Ram — Jab hari dhanush dhare. She was followed by a highly energetic danseuse Aditi Mangaldas and her troupe. A surreal aarti was offered to the river by dance group Sadhya creating magic for the audience.

Curated by Yasmin Kidwai of Springbox films, Namaste Orchha is an attempt by the Madhya Pradesh Tourism Board to put this sleepy town on the active tourist map. Though the town has been attracting a fair share of travellers, most look at it as an ‘optional’ visit when they plan their travel to a more famous Khajuraho nearby. This unique three-day was organised earlier this month to celebrate the rich history, culture and cuisine of Bundelkhand.

Crafts promotion, including direct engagement with the weavers, aimed to put the town on the textile map. Designer Anupama Dayal collaborated with the homestay owners and handpainted the exteriors and walls around town to lend an artistic touch and quirk to the stays.

What’s a festival without local food tasting? A unique food curation by Delhi-based food writer and curator, Anoothi Vishal, brought together noted Indian chefs like Vikramjit Roy and Harangad Singh to interpret Bundelkhandi cuisine and local ingredients in their inimitable styles. There was also a touch of the indigenous by home chef Vandana Dubey who put together a spread of Bundelkhandi food, including bada, thandula-aloo sabzi and tamatar chutney-bathue ka raita. Anamika Singh of Anandini Himalaya Tea gave Orchha its very own blend — Ram Raja Blend.

“The history and story of Orchha is too important and too beautiful to be dependent on anything or anyone to discover,” said Kidwai as she shared the tourism plan to extend the golden triangle of Delhi to Agra till Orchha, both for national and international tourists. “The aim of the festival is to get people to visit Orchha once. And we are confident that they would want to come back again.” There’s the temptation!