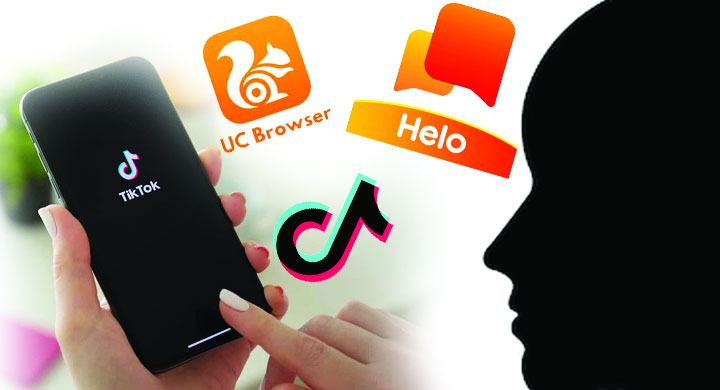 MUSBA HASHMI brings you a report on how the digital strike on China will pave way for more Indian products, giving a boost to the economy

You are dying out of boredom. You unlock your phone only to open TikTok to spend or particularly waste a good two hours on the app watching other people dance to some random song or lip sync to some of the most famous Bollywood films’ dialogues or just to get some cheap thrills watching the gully’s Kabir Singh proposing to his Preeti.

All this now sound a bit too old, since all the Chinese apps are under the Government’s scanner. From everyone’s go-to scanning app Cam Scanner to youth’s favourite pastimes like TikTok, Helo and Likee and to UC Browser, all the leading Chinese applications are paying the price of the Galwan valley clash. However, the Government’s ban on these applications seems like a blessing in disguise for the Indian app developers. While the ban did upset some of the TikTok stars who had a colossal amount of followers which is now at stake, many of them seemed to have suffered huge losses in their earnings.

Vishal Pandey, a member of the Teen Tigada group, famous for making short dance videos on the app says the ban did hit them at that very moment. “We did not see this coming. When the ban was announced, Sameeksha Sud, Bhavin Bhanushali and I were on a conference call. It did hit us because we were making videos on the platform for a few years now. We used to wake up, make videos and edit them. It was a full circle for us. It did require a lot of hard work and efforts. Not only us, but everyone who had been there on the app must have felt the same. But, having said that I am in full support of the Government's decision. There is nothing more important than my country,” Pandey tells you.

He adds that it is an interim ban and we need to wait for further disclosure on this. “I want to clarify that this is not a permanent ban. There are talks going on and the Government will give us clarification on the same. However, this ban has definitely taken away the earnings of many TikTok stars who don’t have an alternative as of now. Though YouTube, Facebook and Instagram are there, it is not easy for everyone to attract eyeballs on these platforms. The impact felt much stronger because people were already losing jobs because of COVID-19. If the ban would have come after things came back to normal, it wouldn’t have made much of a difference. For us, we didn't suffer major losses because we are engaged in doing other things as well, but some people have suffered a lot. But as they say talent always finds a way and so these people will,” he tells you.

Amid all this, a lot of Indian alternatives are also popping up like Chingari and Mitron TV to name a few. “I haven’t used any app yet. However, I am reading the reviews about some of these apps and people are finding a lot of bugs. I don't want to name any particular app but we need a lot of developments. Also investing in these apps will be a good idea keeping in mind the likes of the youth,” Pandey says.

But many people were quick to switch to the Mitron TV app, so much so that the daily traffic jumped up by more than 11 times just after the one day of the ban. And that it has become one of the most downloaded apps in India during the last two months.

Not only the TikTok fanatics, but the ban had also upset the ones who are always on a shopping spree because Shein and Club Factory were also a Chinese product. More so, because the apps had a variety of clothing ranging from a size S to a 5XL, which is hard to find in that easy.

“I had ordered two tops from Shein before the ban, just when I was about to return them because of their fit, the ban was announced. Now I have to use them anyway,” a 30-year-old Mumbai resident, Madhvi Pandey tells you, who is now preferring to switch to Indian brands for her retail therapy.

Another disheartened shopaholic, who had returned her order on Shein a few days before the ban, is now waiting for her refund in despair. “I don’t know whether I will get the amount back or not,” says Mumbai-based Nabanita Guha.

In the list of the 59 applications, another widely used one is SHAREit. And all of us might have had that application on our mobiles because it was on the priority list of our dukan walas for some reason and they shied away from downloading it in all the cell phones that they used to sell.

Such is the case with Amit Pandey, senior scriptwriter at Cosmos Maya. “When I bought the phone, SHAREit was among the few pre-installed apps by the shopkeeper. Since then, I had been using it to transfer files between devices but later uninstalled it after hearing so many cases of data theft and snooping by mobile applications. Quick research helped me find alternate apps like Files by Google, ShareAll, Superbeam and others but later I switched back to the old and reliable style of file sharing — Bluetooth — to nullify any chances of snooping or data theft. Though Bluetooth transfer is a little slow but completely safe. I feel it is ok to be old school rather than having some stranger looking at my personal data,” he says.

Since the ban, switching to Indian-origin apps has become the new norm and the ongoing movements like #MakeInIndia and  #VocalForLocal will get the much needed push.

“India is currently witnessing a tense situation with China, however, the decision to ban Chinese applications is a welcome move. It gives a message that we have to preach and practice, the concept of Atmanirbhar Bharat for our country’s growth. Moreover, this decision opens up great opportunities for the IT MSME sector. They can work on developing application software similar or better. It will act as a catalyst in boosting the greater economic condition of the country,” says RP Yadav, Chairman & Managing Director, Genius Consultants Ltd.