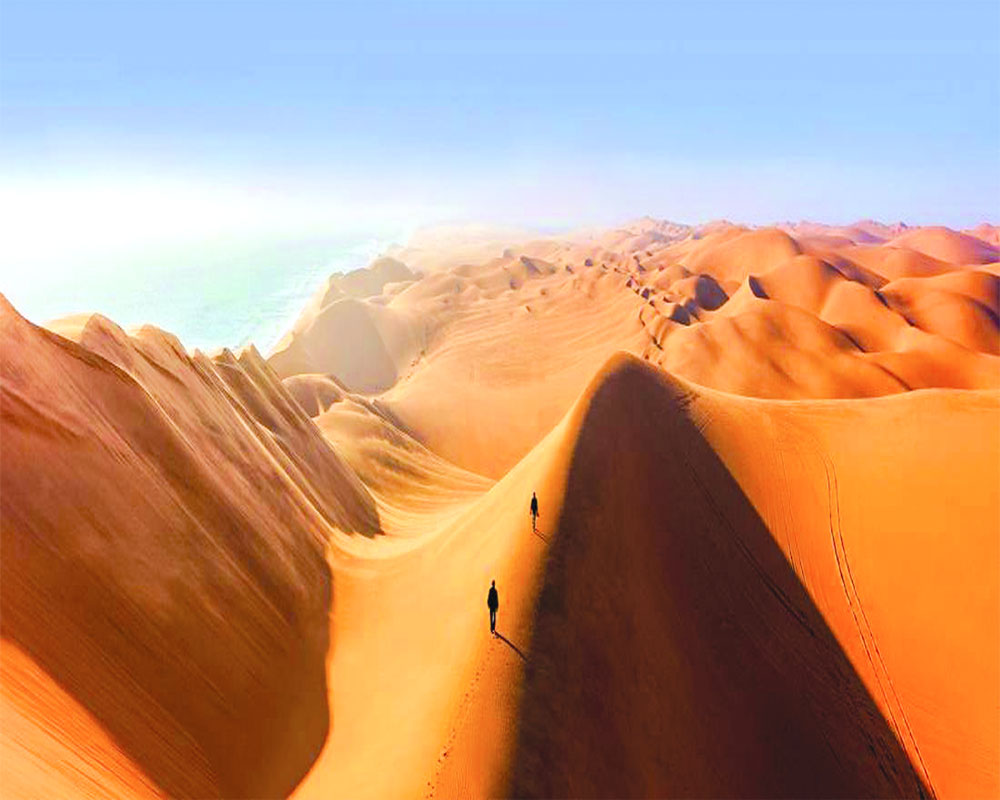 After decades of strenuous research, the environmental scientists and mathematicians have highlighted two primary hypotheses about these Circles. They are Plant Competition Hypothesis and Termite Colony Hypothesis, writes Chitrangada Saikia

Wonder and mystery surrounds the magnificent “Fairy Circles”. They are one of the most beautiful creations of God. These unique “Fairy Circles” are found in the Namib Desert of Namibia in South-Western Africa. They are 10-65 feet in diametre. Usually, they are barren circles lined with patches of vegetation. They stretch for hundreds of kilometres. Surprisingly, these circles look other-worldly from images taken from various satellites. According to the local folklore, the “Fairy Circles” were once created by the God himself. Some say that they are no other than the footprints left behind by the God on the red soil of the Namib Desert. Another local tradition claims that these circles are patches of desert poisoned by the breath of dragons living beneath the Namibian Desert. This is mentioned in the folk tales of the Himba residents of Namibia.

Much beyond, it has always been popular in South-Western Africa that “Namibia is the land that God made in anger”. This comes from the wide areas of Namibia that consists of rugged and deeply forbidding jungles. Indeed, rare records show that this series of expressions believe to derive from the local inhabitants who directly refer to the treacherous skeleton coast of the Namib Desert. Thus the tales of the Fairy Circles go on. They provide us clues to rediscover the strange patterns.

Some mathematicians say that the whole landscape that covers the Fairy Circles looks like polka dots dress. Interestingly, these dots are regularly spaced across the Namib Desert. From far and the sky, they look like islands in a sea of small grasslands. Even the biologists have found it difficult to unearth the existence of them. Tarnita, a theoretical biologist and her team at the prestigious Princeton University in the US say that it is not possible to conduct close experiments about the Fairy Circles in an area like the Namib Desert. Therefore such vast areas pose real big hurdles to test multiple hypotheses.

However after decades of strenuous research, the environmental scientists and mathematicians have highlighted two primary hypotheses about these Circles. They are Plant Competition Hypothesis and Termite Colony Hypothesis. Firstly, the entire Namib Desert is an arid desert. And such arid deserts are normally found closer to the equator because of direct sunlight it gets. Water is very rare and the existing plants struggle to survive in areas like the Namib Desert. About the growth of strange patterns like the Fairy Circles, Tarnita says, “As vegetation expands, and thrives into a patch, smaller plants nearby cannot get the water necessary to survive. The amount of vegetation thins or disappears at the edges of the patch, forming regular distanced gaps.”

Thus, all the Fairy Circles exhibit regular patterns across this desert. Secondly, the Termite Colony Hypothesis says that under each of these patches, there exists a termite colony. According to the ecologists, the eusocial insects where individuals are divided into specialised groups to support the overall survival of their colony make a large number of underground tunnels to transport food for the rest of the members. In this whole process, the termites seem to destroy the vegetation around their colonies. Further, scientists state that in case of encroachments of one colony by the other, they fight till their enemy is finished. In this long and underground war of survival, a series of termite colonies develop in due course of time. But interestingly, these colonies are seemed to be of equal size and there is no “termites land” between two colonies. These are some of the novel revelations that open up scope for future research.

Thus the Namibian Fairy Circles represent a unique ecosystem so far till 2015. In the year 2016, such Fairy Circles were discovered outside Newman, in a small mining town called Pilbara region in Western Australia. This provides a new opportunity to the scientific community to once again uncover the origin and growth of such phenomena. By now, the Australian Fairy Circles indicate that these circles are the reaction of the plants to scare waters. Though both the Australian and Namibian Fairy Circles are more than almost thousands of kilometre apart, they are declared to be identical. Unlike Namibia, where a large number of insects of species like ants and termites are found in the Fairy Circles, the majority of the circles found in Pilbara do not have ant or termite colonies. Such nests or mounds of insects wherever discovered in Australia are also randomly distributed unlike the Namibian ones.

Besides their mysteries and scientific discoveries, the Fairy Circles add to the beauty of the biodiversity of Namibia and Australia. They attract numerous insects and animals such as ants, bees, geckons, spiders, wasps and small mammals like golden moles, bat-eared foxes, black-backed jackals and aardvarks. Again, the Fairy Circles can be well-regarded as fine examples of allogenic ecosystem engineering. Such ecosystems refer to an environment that transforms the environment by mechanically changing materials from one form to another. Such land forms helps in restoring water, perennial plant and termite biomass across the Namib Desert. As far as they are not a threat to human and natural environment, the Fairy Circles are to be preserved.

For years, though the scientists and researchers have suggested various theories about the Fairy Circles yet the mysteries have not come to an end about them. Hence, its very existence is highly debatable. They would remain enigmatic unless destroyed in the course of nature or through some man-made actions.

(The writer is a young environmental activist)