For a lasting peace in Nagaland

For a lasting peace in Nagaland 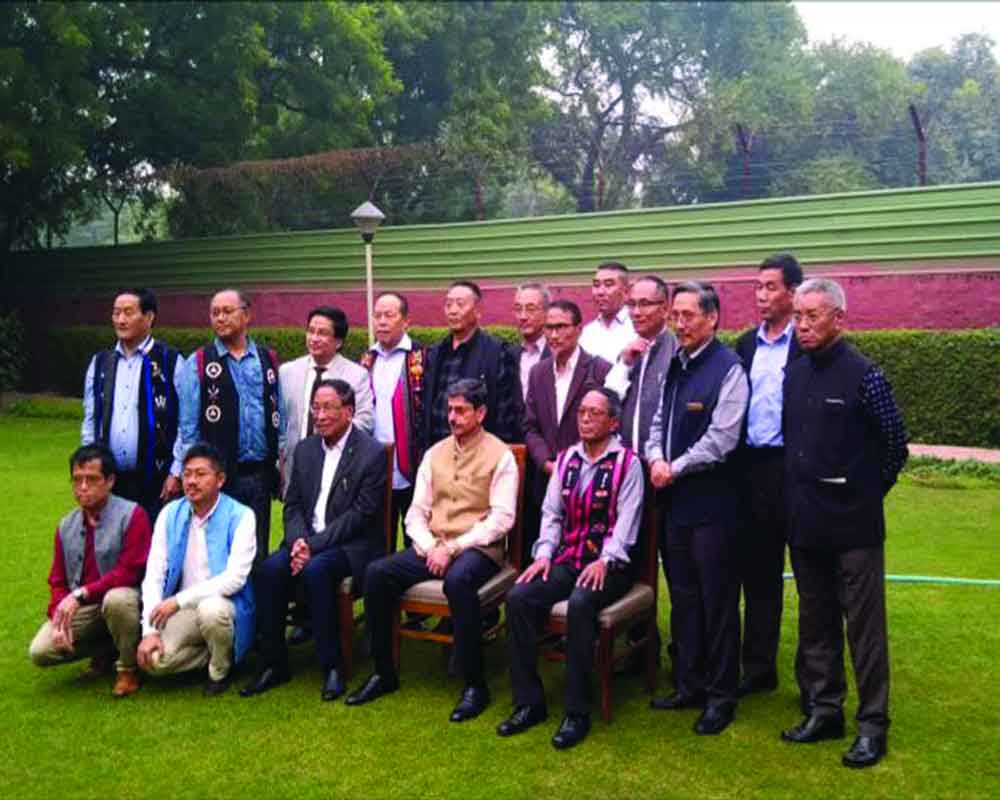 As it is over three months since the October 31 deadline to finalise the Naga Peace Accord failed, the talks between the Centre and National Socialist Council of Nagaland, Isak-Muivah (NSCN-IM) is shrouded in utter confusion. More so, because there is a trust deficit among the stakeholders, resulting in little progress on the political front. On January 30, NSCN-IM leaders led by Ato Kilonser and chief negotiator Thuingaleng Muivah opened another set of peace talks with Interlocutor and Governor RN Ravi.

However, senior NSCN-IM leader Kehoi has questioned the intent of the Centre, alleging that the Government is misleading the Naga people. In an indirect reaction to threat of resumption of picking up the guns, Governor Ravi, in his Republic Day address, said guns and corruption have taken toll on the Naga people and warned, “I remind them that violence has never succeeded and shall never succeed… In democratic India, the people are supreme. We resolve our differences through peaceful dialogue, not under the shadow of guns.”

Ironically, the concerted bid to bring a lasting peace in Nagaland was one of the first initiatives Narendra Modi took after becoming Prime Minister. The 2015 accord marked a resolution of peace talks between the Government of India and the NSCN-IM that began in 1997. However, the peace talks are yet to be concluded.

The issue of Naga integrity and independence has a chequered past. Its roots go to the medieval period as documented in Tarikh-e-Aasham by Shehabuddin Talesh (one of the Mansabdars of Bengal). Back then, in 1662, members of this ethnic community were employed because of their fighting spirit in the service of the nawab to fight against the Ahom king Jaidhwaj Singha.

Frequent fights took place between the Nagas and the Ahoms in 1530 and 1692 for taxation and sovereignty in which many Assamese subjects were killed.

In the following period, the Ahom Raja Gadadhar Singh took revenge and subdued the Nagas occasionally but could not suppress them in the 17th and 18th centuries as recorded in the Ahom Buranji.

On the other hand, the royal chronicle of Manipur known as Cheitharon Kumpapa mentioned the annexation of the soon-to-be Naga Hills District in 1832-33 by Raja Gambhir Singh, the then king of Manipur, erecting a stone sculpture at Kohima. This event irked the British.

Following the treaty of Yandabo signed in 1826, the Naga Hills District was formed in 1866 by the British Government with its headquarters at Sumuguting. And it became part of British India in 1879-1880. The British administered it from 1881 onwards. First Deputy Commissioner of the Naga Hills Damant, along with his thirty-five escort troops, was murdered in 1879 by the Khonoma warriors because of the unwelcomed administrative initiatives, establishment of police outpost and imposition of a house tax of Rs 2.

Britishers followed divide and rule in most of its colonies, but, at the time of their exit from the colony, they adopted the strategy of “divide and quit”, (Mohammed Ayoob, The Hindu, November 6, 2019). This was evident from partitioning of Ireland (Catholics and Protestants), India (Hindus and Muslims), and Palestine (Arab Muslims and Jews) in the 20th century.

The identity and politics among the Nagas dates back to the days of establishment of the Naga Club in 1918 by Naga leaders, village officials and French Labour Corps who were First World War veterans with the aim of addressing the social and administrative problems of the villagers.

An unseemly concoction of missionary, education, Christianity, and war-taught political awareness drove some Naga men to submit a memorandum to the famously-and-overwhelmingly-boycotted-by-Indians Simon Commission in Kohima on January 10, 1929 seeking reversion of their political status through “you were the only people who have ever conquered us and, when you go we should be as we were”.

Its outcome was that the Simon Commission recommended the Government of India Act 1935 treating the Naga Hills District as “Excluded Areas”. In April 1945, Sir Charles Pawsey established an institution known as the Naga Hills District Tribal Council that evolved into the Naga National Council (NNC) in 1946 aiming to establish the unity of the Nagas and rejuvenating the community from the sufferings of the Second World War focusing on the establishment of local autonomy within the Province of Assam, and the people’s training for self-Government leading to publication of a newspaper called Naga Nation for a few years.

In this initiative, AZ Phizo, the father figure of the Naga secessionist movement, and other Naga leaders of the NNC took notable roles.

In 1947, a nine-point memorandum known as Hydari Agreement was signed in which the ninth article read “the Governor of Assam as the Agent of the Government of the Indian Union which would take the special responsibility for a period of ten years to ensure the due observance of the agreement and the NNC should be asked at the end of this period for further extension or the new agreement considering the future of the Naga people”.

This inherently empowered the NNC under Phizo’s leadership to declare “Naga Independence” on August 14, 1947. However, this could not bring substantial changes on the Nagas’ demand of separation from the Indian Union apparently because of a gap in the understanding of the spirit behind the agreement, as felt by GK Pillai, who was in charge of the North-East affairs (1996-2000) and, later oversaw the progress of the peace talk as the Home Secretary of India.

After a plebiscite in 1951 for over six months, 99 per cent of the Nagas sought a referendum which did not materialise. And it was after which they boycotted the General Election of 1952. In 1955, some of the extremists took to arms though the NNC did not approve it at that point of time.

In 1956, the NNC set up the Federal Government of Nagaland represented by a flag which is in use till date. Also, it raised its own army called Naga Safe Guards and another paramilitary by the name Naga Home Guard. Its underground parliament was declared “unlawful associations” under the UAPA 1967 in 1972.

Against the backdrop of this development, what came as a surprise then was that followers of the Naga movement’s involvement in the General Election of 1957. Their three nominated members were elected unopposed and one of them became a Deputy Minister.

Social engineering of the Nagas

Even with centuries-long history, the idea of Naga has remained controversial. For the integration of the Nagas, former four-time CM of Manipur and Parliamentarian Rishang Keishing, a Manipuri Tangkhul Naga with lifelong allegiance to the Indian National Congress, initiated an agreement signed in 1972 between the then United Naga Integration Council (which later gave birth to the NSCN) and the Congress.

This agreement recognised the vision of a Greater Nagalim, a region that would integrate Nagaland and the Naga-populated districts of Manipur under one administration, much to the chagrin of Manipuris.

However, this stand left him in a vulnerable position as he was made to resign from the CM-ship for his support to the Nagas for Nagalim even as he wanted it within the confinement of Indian Constitution.

Secondly, several attempts were made to murder him by the NSCN, led by fellow Tangkhul man Thuingaleng Muivah. His body was even denied a burial place in his hometown of Ukhrul. Similarly, another CM of Manipur Yangmaso Shaiza from the same Tangkhul tribe to which Keishing and Muivah belong was murdered by the Muivah-led NSCN for his opposition to the Greater Nagalim demand outside the purview of the Indian Constitution. SC Jamir, the former three-time CM of Nagaland, Governor of Odisha and a signatory to the 16-point agreement in July 1960 that paved the way for Nagaland creation, recently opined that the Nagas outside Nagaland are indigenous to their own State.

This came as a setback to the current peace process that aims to integrate all the Nagas, close to 89 tribes as of 2015, under one political unit. Pradip Phanjoubam, the acclaimed journalist from Manipur, recently quipped in his piece published in The Hindu that “all notions of unique histories and ancestral homelands will need moderation” against the backdrop of the tumultuous events, competing interests, infighting, multiple factions, fratricide, forced assimilation, identity re-construction/ colonisation, etc, which are common to all armed struggles.

Apparently, the most accepted meaning of the word “Naga” is people, and the imagined nation of the Nagas is an outcome of the voluntary or otherwise integration of multiple “peoples” at least in Manipur through the efforts of the main outfit NSCN (IM) using various non-inclusive means.

The villages in the remote areas of Manipur will never be developed as the existing arrangement of Autonomous District Council has failed to do much for them owing to various reasons, corruption being the major, even though the instrument was created to take development to the last person in the village.

Many of the people in the remote villages still live close to the state of nature which is the main reason why they do not like to be represented, ruled or suppressed by others, including the NSCN (IM).

In the proposed settlement, a time-framed industrialisation and development in 10 years are to be brought about. Will those people evolve to the state of civilisation in 10 years because of pumping in of funds? Has anyone thought about the tenability and cost of such a fast-paced development?