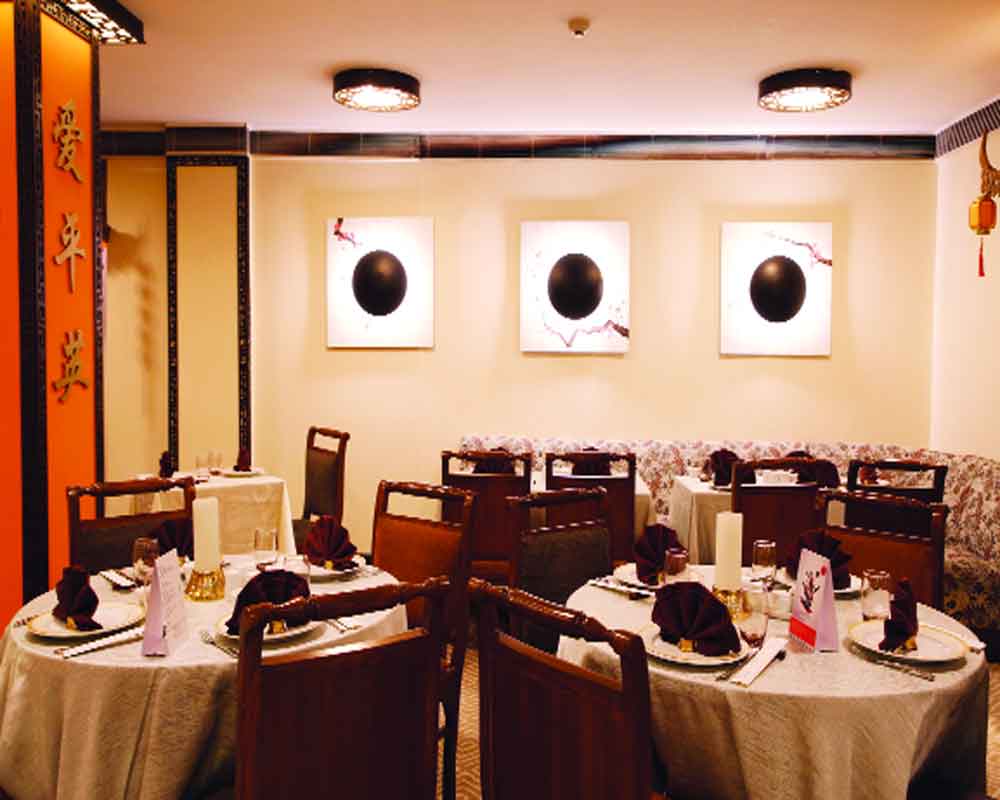 It has been 20 years since Larry’s China at The Ambassador opened. SHALINI SAKSENA tells you how the ageold restaurant has captured tradition and yet evolved with time

One of the first things that strikes you as you sit down to dine at this restaurant in the heart of the Capital is the menu. It is interesting to note the photographs alongside the menu, some dating back to the late 1800s and early 1900s. These photos, with a brief description of where they were taken, give a sneak peek into the culture that existed in China then a perfect example of Chinese tradition along with the culinary evolution of the cuisine.

Executive Chef Sanjeev Chopra, while serving some of the signature dishes like shredded chicken asparagus in oyster garlic sauce, sliced sole fish with roasted chilies and honey chili lotus stem regales you with how the restaurant came up with this unique idea of the menu. “The concept of this restaurant is based on L Carrington Goodrich, an American sinologist and historian of China. As a child, he had spent many years in China.

He remembered those times through the photos which were difficult to take given the circumstances back then. Luther aka Larry collected these photos and made an album. We went a step further and created a restaurant on this theme,” Chopra shares.

He tells you that Chinese food was brought to India by the immigrants and first took root in present-day Kolkata where they developed a cuisine to suit the Indian palate and came to be known as Indo-Chinese cuisine. This food became popular in Kolkata and spread to other parts of the country. He tells you how the popular American Chop suey came to be.

“Just like immigrants came to India, they went to the US as well particularly San Francisco. A popular dish here is American Chop suey. A popular story goes that one late night some American soldiers who were hungry landed at Li Ching Hong’s eatery and demanded food. Everything had finished. But Li chopped veggies, noodles and meats and cooked them together, added sauce and the dish was born,” Chopra says and tells you that while the dish doesn’t find a mention on the menu, if a guest wants it, it is served. “There is no need for it. Everyone who comes to Larry’s knows that the restaurant’s name is synonymous with American Chop suey. Then there is how there was need for another Chinese restaurant back in the 80s besides House of Ming. We decided to introduce Indo-Chinese American cuisine here,” he explains.

Serving the perfectly blended lemon coriander chicken soup that is not too hot, not too cold, Naresh Khaitan, Larry’s China’s supervisor who started off as steward staff at the Ambassador in 1978 tells you that over the years, Larry’s has undergone renovations. “Back then the restaurant had wooden flooring. In 1990, Taj took over and then in 1997, the renovations were done. The lighting was improved. It is so much brighter now. The name was changed to Larry’s China due the change in the theme and the concept on which it is based. The senior management brought in Cantonese as well as Schezwan food. The good thing is that everyone can relish these dishes,” says Khaitan whose sons also work with the Taj group.

In comes the lotus stem honey chilli. One is told it is cooked in such a manner that it remains moist and well-cooked on the inside and crispy on the outside. It is a trick that their chef has perfected over the years. Another winner here is the sesame tiger prawn. It is the restaurant’s signature dish. Nobody who has visited this place has walked away without trying this dish if he is a non-vegetarian.

“People have been coming here for decades to eat this. They now bring their grandchildren. There is a guest who has settled in the US long back, but every time he is in Delhi, a must do on his list is a visit to this place to savour this dish.  He also sends his guests and then calls me and tells me that I must serve them this dish. If you look at the size of the prawn you would not believe that a prawn can be this large. But there is a trick which we can’t reveal but it depends on how it is cut. It is then batter fried and tossed with onions, green bell pepper, spices and sprinkled with sesame seeds. It is a dish not to be missed,” Khaitan asserts, telling you that he has served the likes of Minister of External Affairs Sushma Swaraj who used to celebrate her birthday here and even Congress leader Rahul Gandhi who is a regular here.

And he is spot on when he says that once the guest has eaten this dish, there is no way he will not order it the next time he comes visiting. The taste is amazing and even those who diligently stay away from sea food will like this. The crispiness of the batter fried prawns and veggies is perfect — no taste overpowering.

But if one wants to still stay away from prawn, go for sliced Pentagon chicken. Thinly sliced chicken strips that are shallow batter fried, tossed with Chinese five spice and dry red chillies is good. No meal is complete without dessert. While one may think that date pancake is not something to be ordered. But the truth is that it is so different from what one would have eaten anywhere else. Therefore, it makes for a must eat making it a perfect way to end a great meal.