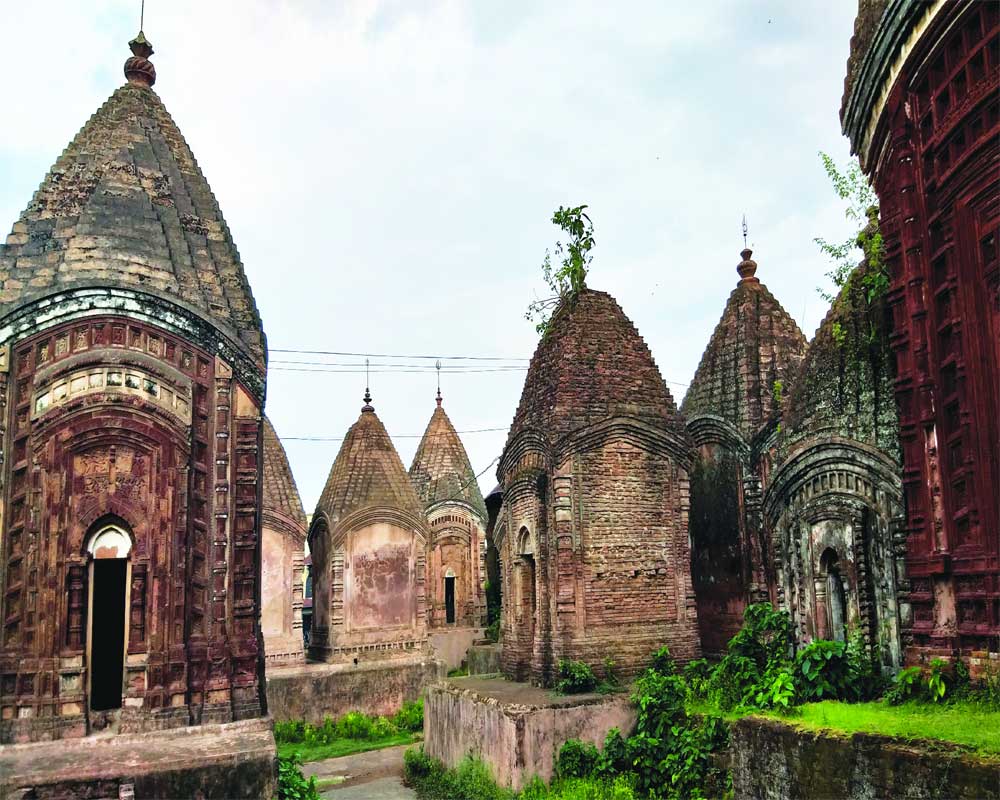 Dating back to the 15th century, temples of Maluti in Jharkhand bear a testimony to India's rich yet hidden heritage, writes Somen Sengupta

Spectators gathered along Rajpath to witness the Republic Day parade on January 26, 2015 were surprised to see the tableau of Jharkhand. Ever since the state was formed, it was perceived to be the land of jungles and a rich tribal culture. Beyond that were its industrial cities like Jamshedpur and Bokaro, but largely, it remained unexplored.

Few months later, Maluti attracted attention once again, when in newly built Ranchi airport, tourism department of Jharkhand placed a huge poster of Maluti with an objective of encouraging tourism in this almost unknown heritage village. Today, Maluti is counted among the unique heritage spots of India.

No where else can one find an instance where within a radius of 1,150 ft, a few generations of zamindars have built more than 100 terracotta temples instead of palaces and pleasure chambers. Even in Bengal, a state that houses several world class terracotta temples, there is no such distinctive a village. Incidentally, Maluti is just a few kilometres from Bengal border and its dwellers speak Bengali and not Hindi. The village cult and customs are more Bengali than Jharkhand.

Though not much information or knowledge is available on these temples, the local folklore/legend has it that this place was known as Mallahati, a zone owned by Malla dynasty that ruled Bishnupur of Bengal. It is the same place that houses many world famous terracotta temples.

The place, it is believed, derives its name from a local Goddess named Moulakshi, who has no reference in Hindu mythology. It is assumed that this Goddess came from Tantrik cult of Buddhism in which she is described as elder sister of Tara. Later, she may have been adopted by the Hindus as their Goddess and started attracting devotees. Based on this information, many believe that this place was once influenced by Vajrayana Buddhism, in which shadow of Tantrik cult is said to be profound.

A website claims Adi Shankara visited this place when he was touring India in his mission of re-emerging Hinduism over Buddhism. The conversion of a Buddhist Goddess into a Hindu Goddess may be a testimony of that forgotten past.

Legend has it that in the 15th century, a new rule was established by an orphan named Baj Basanta, who got a huge tax free land/property as gift, courtesy the then Sultan of Bengal, Alauddin Hussain Shah (1495-1525).

It is said that once during his hunting expedition, Sultan lost his pet falcon and was deeply depressed. Basanta, the village boy, salvaged the falcon and got the bird back to the Sultan. Happy to have his falcon back, Sultan rewarded Basanta with a sizable land. The boy thus got famous as Baj Basanta.

In 1680, Baj Basanta’s great grandson, named Rajchandra, was killed in a battle with another king of Rajnagar in Birbhum. Following the incident, his four sons shifted their capital to Mallahati. They found the place to be very peaceful. Once settled, the family branched into four and started expanding by building a plethora of temples. It is believed that all four branches started founding temples instead of building palaces and pleasure houses.

Gradually, in the next 200 years, a time came when it was found that the village had 108 temples dedicated to various Hindu Goddess and almost all decorated with exceptionally beautiful terracotta panels. Today, only 72 temples can be found in Maluti. Rest are either grounded or in a dilapidated condition.

These 72 temples are situated in 4 clusters in the village and one needs to take narrow lanes and beaten tracks to visit all. It is a different matter that the village is very small and thinly populated, and so it does not take much time to visit all clusters. Poor maintenance and lack of public awareness has marred the charm of the place to a great extent.

The first cluster is known as Madhyam bari. The second and third clusters are located very close to each other and appear as one. They are known as temples of Rajbari and Sikhir bari. The last group of temples which are in equally bad condition is known as Chayer taraf. Apart from these temples, there is a hexagonal rasmancha.

While all temples were originally embellished with terracotta, due to weathering and random defacing of walls, many of these temples lay painfully bare now. In many temples, panels are continuously crumbling. The temples have developed cracks and wild vegetation grows uncontrolled. In a few temples, walls are defaced with writings and cattle roam inside. Some temples are still in use and hundreds of people continue to cause damage to its rich art works. During Diwali, on occasion of Kalipuja, fairs are organised at temples clusters, attracting large crowds. These fairs are yet another cause of continuous damage to the temples.

The central arch and its surrounding areas are all decorated with the battle sequence of Lord Ram and ten-headed Ravana. In some panels, Ram is shown on the shoulder of Hanuman, whereas, in some temples the same warrior is shown fighting on his feet. In some panels, Ram sports a manly moustache. In a similar manner,  Ravana is also visualised in different forms and shapes. He has his usual ten heads and ten hands but his postures are distinctive different and vary from temple to temple. While Ram is accompanied by Laxman and Hanuman, Ravana is followed by demon warriors elegantly dressed up and spirited. The panoply and shoes of Ravana in every temple are beautiful and distinctive. In some panels, Ravana can also be seen fighting alone on foot.

Some of the divine figures are very unique and not commonly found in other terracotta temples. Musicians, flying demons, foot soldiers with naked swords etc are in plenty on each front wall of temples. Social sequences like a royal man on palanquin, worshiping, goat sacrifice and so on are also found aplenty.

The numbers of panels on the side walls and back wall, however, are unusually few and appear to have been removed. A row of small chariots is carved under every figure of Ram and Ravana. These rows of chariots are placed just on the apex of main entrance and again, those are very richly decorated with warriors fighting with deadly weapons, either on horses or elephants. Beautiful floral designs with various hindu motifs are etched all over the wall.

Mahishasurmardini Durga is another common feature to be found on these terracotta decorated temples. Here, she mounts an animal which neither looks like a lion nor a horse. However, some panels depict excellent horse statues. In some panels, she appears with Laxmi and Saraswati on her either sides and in some, she is depicted by herself.

Even though these temples are largely believed to be made of terracotta, there is a contention that these panels may actually be carvings on a very soft type of sandstone, locally known as phool pathar. Which is a possibility because in Birbhum district of Bengal, some temples are actually decorated with phool pathar and are commonly confused for terracotta.

The locals have also been using the hexagonal roof less rasmancha (platform) to celebrate Holi and Raas Utsav of Radha-Krishna, which is causing considerable harm to the structure.

Temples of Maluti follow the Bengal school of temple architecture but sadly not much variation found in that. Most of the temples are made in charchala style, that has single pinnacle with four sides slopes. Only a few temples are made of atchala and deul style. So a monotony grips while taking a tour. However, the thrill of photography sees no bound of satisfaction when one gets to capture a plethora of similar looking temples in a single frame.

As for now, the temple village of Maluti is a victim of sheer negligence from the government side. The village remained lost to world and even to the people of its own state, the undivided Bihar, as well as Bengal even before 1979 when ASI official named AK Sinha first undertook a project on this village and submitted a detailed report of his work

Despite this report, no basic minimum amenities were built in Maluti and the place did not find mention in any of the tourism promotional literature. In 2009, Global Heritage Fund surveyed this village and marked it as one of the fastest vanishing heritage of the world. Even after that, no major Government fund was sanctioned to protect these temples.

It is heartening to see that the present government is atleast making that effort to promote it as a unique heritage site of the state. At an individual level, a local resident named Gopaldas Banerjee who has been observing the gradual decline of the heritage has done excellent work to record and protect these temples. As someone born and bred in the village, Banerjee had heard various legends and stories from his early childhood and has penned several authentic books on the subject. He was recently felicitated by Jharkhand Government for his work of recording history.

The temples of Maluti are a burning testimonial to India’s rich yet hidden heritage and if proper protection and exposure is not given these beautiful structures, all will be lost. Their dilapidated condition is only worsened by overgrown vegetation and massive water leakage from the roof and the walls. A few of the temples have already crumbled owing to neglect and many are awaiting the same fate. Though some restoration work has started recently, but no amenities can still be found for the tourists. It would be a pity if these temples are lost — a sin beyond pardoning.