Manthan in a glass

Manthan in a glass 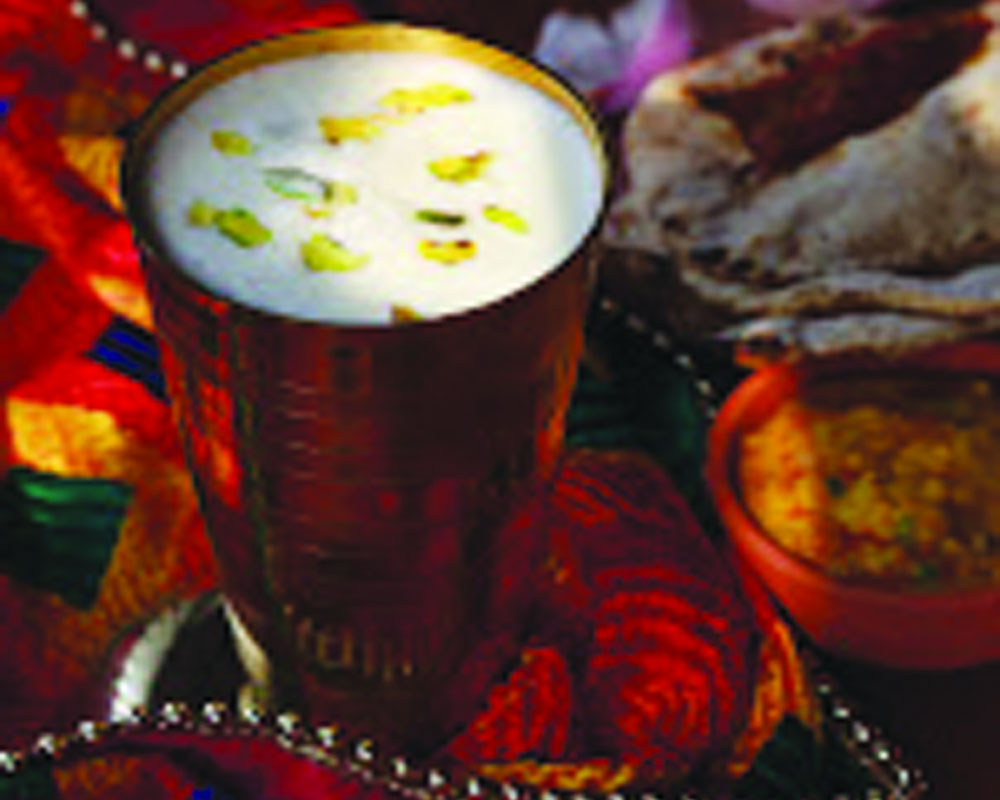 SHALINI SAKSENA tells you how the commonplace lassi is not so common, given that it transcends borders

A tall of lassi is a must have when one travels to Punjab. A trip to this State is incomplete if one has not had the mitthi lassi. But did you know that this drink for all seasons is not just restricted to Punjab and in fact, can be found in different variants not just in India but in countries like Turkey where is a called Kefir and made from cultured fermented milk, in Mongolia where it is known as Kumis and made from fermented mare’s milk and Amasi from South Africa.

Radha Bhatia, chairperson of Bird Group travel conglomerate, tells you that the idea of a coffee table book — Lassis Of India: Smoothies With A Twist — on the good old lassi came up while having a conversation with her granddaughter, who while was enthused with the idea of a smoothie was not so enamoured with the lassi. That got her thinking and led her on a journey that lasted three years. “It took me three year to get all the research work and finally get down to writing the book. Not because the research itself was challenging but because I only had time on Saturdays to sit down to trace the history of this versatile drink that one can have any time of the year and with any meal or make a meal out of it. During my travels, I came across many recipes. I also met people who would talk about their culture and how a particular food was popular. Back home, a lot of my friends helped me in my research,” Bhatia says.

She tells you that there is a difference between lassi and smoothie. A smoothie, one is told, primarily has fruits and veggies unlike the lassi. “A lassi that is churned in a mixie jar is very different from the taste of the lassi that is made in a handi and madhani. I want people to experience the real taste and hence are in the process of selling the handi and the madhani online. There is a whole process of using the madhani is an exercise for the hands as well. when you use the wooden madhani one has to use the mounds on the hands for the circular motion. This is a great exercise,” She says.

People around Bhatia were not very convinced when they came to know that she was in the process of writing a book on lassis. “They wanted to know why I had chosen this particular drink and not something else. ‘Why not something more exotic,’ they had wanted to know. Also, I had wanted a person of repute who knew the food industry to write the foreward. It was a Saturday. I called up Vir Sanghvi and told him about my book. At first, he was not enthusiastic but when I gave him the details, he was totally onboard,” Bhatia says whose favourite lassi is from Kashmir that has almonds, saffron, cashews, pistachios, walnuts, honey, sugar, gulkand, rose water, rose petals, cardamoms and of course dahi. All the ingredients are whisked. Poured in a glass, garnished with rose petals and cardamoms and served chilled.

Another favourite of hers Talicha More — tempered buttermilk from Tamil Nadu that has mustard seeds, dry red chilli, hing, curry leaves, salt and buttermilk. All the ingredients are fried in mustard oil and then buttermilk is added, simmered for a few minutes and seasoned with salt. This can be had with rice or just enjoyed as a drink. The book that has over 74 lassi recipes — some traditional and others a modern-day variation like the spinach lassi or aloe vera lassi or date lassi or even crème brulee lassi — gives you a history of the drink, the region from where it is and the traditions around it.