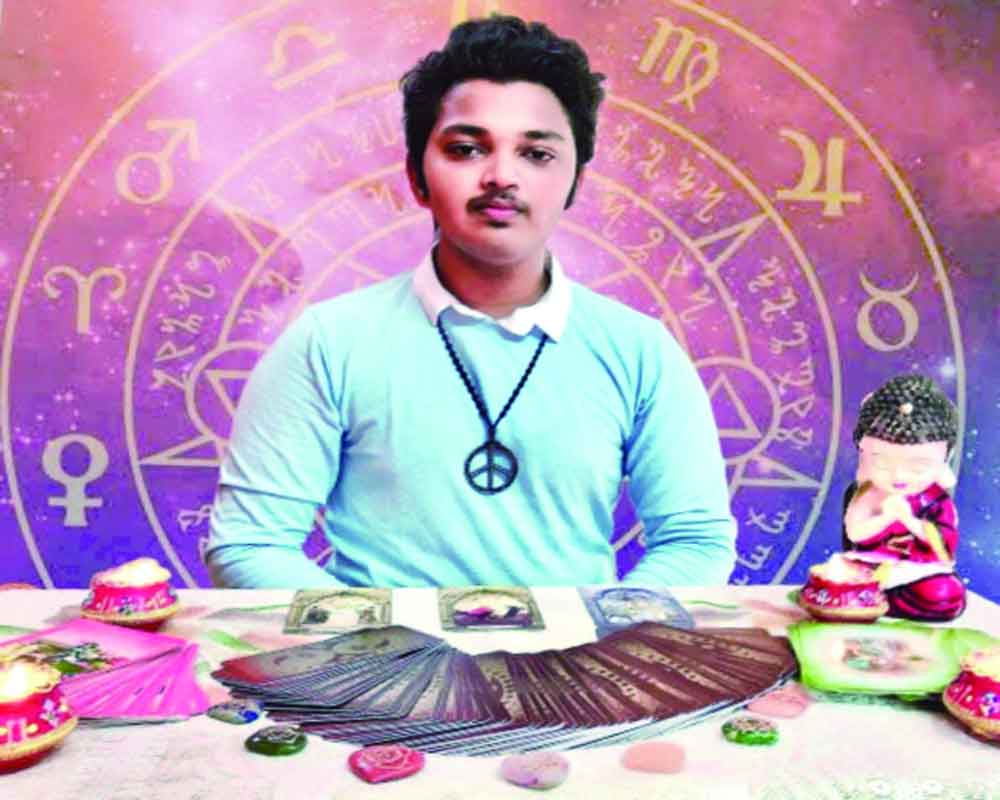 MUSBA HASHMI speaks with AYUSH GUPTA, a 17-year-old Jabalpur-based boy who is known as Youngest Reiki Healer of India and is also the youngest Tarot card reader, about what it took to reach the stage and how he got the title

At the age of eight, when children build sand castles on beaches and play around with  superhero figurines and stuffed toys, and intuitive arts are nothing, but mere words for them, this Pune-based boy took to learning meditation. He then got enrolled in Vishwa Reiki Sansthan, Pune and at the age of 12 became a Reiki healer.

Meet Ayush Gupta, a 17-year-old Class XII student, who believes that  he didn’t chose the art, but the energies chose him.

“My father, Kashi Prasad Gupta, introduced me to meditation when I was eight. He is into spiritual things a lot and he wanted me to walk his path. When I turned 12, he introduced me to Reiki and I found it interesting. Since I was very young, I didn’t understand the depths of the art, but for the sake of my father, I learnt it at Vishwa Reiki Sansthan by grandmaster Devansh Shukla. Once I was into the art, my thought process changed completely and I was a different person altogether. It was like the energies had chosen me,” Gupta explains.

He tells you that after four-five months, unfortunately his mother was diagnosed with throat cancer and that is when he dug deep in the healing art.

“When the news broke to us, all of us were shocked. We didn’t know what to do. That is when I thought of turning to Reiki and see if that will prove beneficial for my mother. I healed her for three months and when we went to Nagpur for her re-checkup, the cancer was cured. The doctors were left shocked because cancer is a disease which is non-curable till date. That was a proud moment for me and there were two reasons for celebration — one, my mother was cured of cancer and two, that it was my first Reiki case. That’s when I realised that if the art is beneficial in these kind of problems. then I should use it to make people happy,” he tells you.

There were absolutely no apprehensions in Gupta’s mind, when treating his mother. “I am into energies since I was eight. I know that if the energies won’t heal, they won’t cause any harm either. I always had a connection with these energies. Moreover, there was a hidden trust that I could do that and that trust along with the energies worked in partnership and I was able to solve my first case successfully,” he tells you.

The success gave Gupta the much needed confidence and he decided to take it up full fledgedly. “I became 100 per cent confident that I could help a lot more people in life. It was like my life took a U-turn,” Gupta, who has cured 400 patients, that of Diabetes, Cancer and even Corona till date, says.

His first corona patient was his friend’s sister, who had tested COVID-19 positive in April 29. “My friend called me one day and informed me that his sister, who was pregnant back then, had tested positive for COVID-19. Honestly, I was a bit nervous in treating her because it was a matter of two lives, but was able to cure her of Corona in a week. She is now doing perfectly fine. I have treated two more Corona patients and they have recovered,” he tells you.

Reiki, he says, is a scientifically-proven technology in the world and his success rate in curing all 400 patients is 100 per cent. “In Reiki, we deal with positive and negative energies. Whatever problems that one faces is because of the negative energies. Through Reiki, there are few symbols — one for mental energy, second for physical and third for distance healing. In distance healing, we send some  sounds to the person and he has to sit and listen to them for focus and then we can send the energies to him,” Gupta explains.

There are four levels of learning Reiki. In the first stage, one can only heal himself, in second he can practise distance healing, third he becomes a master and can deal with more energies and heal many people, fourth is the teachers level, where he can teach the art to others as well and fifth is the grandmaster.

“I am a grandmaster. It took me two years to reach the level,” he tells you and adds that there is no fixed term of completing the levels, it differs from person to person.

Everything in Gupta’s life has happened all of a sudden and so is the case with making it into the World Records as the Youngest Reiki Healer of India. “One day, I got a call from the World Records Association saying that they have shortlisted five children for the title all over India. Then we were called for an examination. It was like an energy check with their grandmasters and team. I passed it and after a month I got a call from them that I had made it to the World Records. I can never forget the feeling because I had never thought that I could achieve it,” he recalls with a smile.

The time taken for healing people depends on the problem they are facing and for how long.

“I have treated and cured a 75-year-old Diabetic, who had Diabetes for several years. It took me a few days to cure him. For rest, it can be months,” Gupta, who takes a 25-minute session each day, tells you.

As interesting it may sound to be the Youngest Reiki Healer of India, but there are challenges too. “Sometime people don’t put trust in a 17-year-old. They doubt the calibre. Like the 75-year-old Diabetic I cured, he was initially reluctant to the treatment. He doubted that how can a child cure him when even doctors can’t. I wanted to change that mindset, hence I had put all my focus on that one case and showed him the results in a few days. He was shocked. This is, at times, upsetting when adults don’t have faith in you just because of your age, but I think with my actions I can and have proved myself to them,” he asserts.

Not only that, Gupta is also the Youngest Tarot card reader of India and has done sessions for many celebrities like  Remo D’souza, Shankar Mahadevan, Ravi Dubey and Balraj Syal, to name a few.

“All these people came to me through word of mouth. I am glad that I am able to help people and ward off negativity from their life. I would continue doing the good work,” Gupta, who doesn’t charge any particular amount for healing and even does it for free for those who can’t afford it, tells you.

“The moment one tries to commercialise the healing art. It loses essence and results. The art is for people to do good and not make money out of it,” Gupta says.