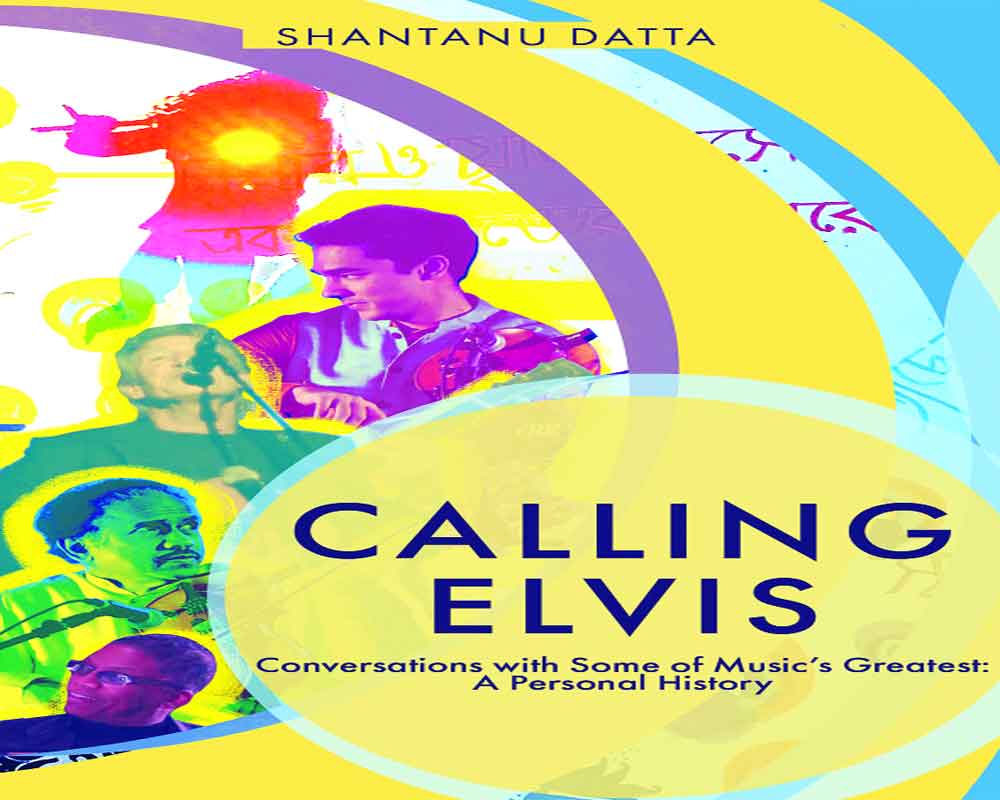 Name :  Calling Elvis: Conversations with some of music’s greatest

‘There is no such thing as a wrong note as long as you can sing it,’ Pete Seeger said, his gentle tone immediately endearing him to an audience that had spilled, recalls Shantanu DaTta in his book. Excerpt:

They all sang along.

With Pete Seeger it is difficult not to. Embellishing his selection with high-note harmonies by grandson Tao Rodriguez, Pete strummed his banjo and guitar to strike up the ever-popular If I had a hammer question, reminisce Jose Marti’s Guantanamera, count 1,2,3 on the Vietnam Song and run through the Midnight Special. In between there were stories, lots of laughter, more stories and a knee-slapping, foot-stomping jingle that had the 77-year-old bringing the house down with thunderous applause.

The money tune came next. It was zesty, what with Tao’s freewheeling harmonies aided by the snappy guitar rhythm: …Money can still be handy too (but) let’s not allow ‘king money’ to rule.

The audience, essentially 30-plus, was loving it.

‘What energy, it’s amazing…’ were all that the chattering classes could manage.

But it was truly magical. How could one man, 77 years old, and helped only by a guitar and a grandson, captivate his listeners thus? And that too when there are none of the now-generation psychedelic pyrotechnics, no multi-coloured lights and no fancy bass-boosting sound system.

The truth is Pete doesn’t need all that. He never did. For having spent over five decades directing music towards social change for peace, equality and decency, his philosophy was always about heart-and-soul, and about the power of simplicity. No wonder they always sing along.

During the early ‘60s, after he was able to reorganise the Newport Folk Festival to use profits to help folk performers, he privately published How to Play the Five-String Banjo but refused to copyright the book because the ‘banjo belongs to everyone’. Pete’s humanity was so unusual it seemed threatening. Always a popular target of the US witch-hunt-he was sentenced to prison and blacklisted during the McCarthy era-particularly suspicious was his custom of learning songs from every country where he gave concerts.

Back at Siri Fort, Tao held on to this tradition as he rendered an Argentinian song about god, war and the future. Pete was on harmony this time as the grandson’s soul-stirring high-pitched singing had the audience fall head over heels. A standing ovation was the young man’s reward.

A slow and soft tune on Pete’s recorder helped the ever-cooperating audience hum one note for effect, which was then followed by what the Guru had picked up from an Indian student, Ram Dhun. Tao dwelled on the high notes once again as Pete celebrated his comeback.

Over two hours had slipped by rather quickly. By then there were more songs with tabla player Ashim Chakraborty joining the duo. But the audience was getting restless. Some of the favourites were yet to come. ‘Turn, Turn’, someone screamed from the far corner of the balcony. ‘Last Train to Nuremberg, Garbage’, it went on. Amidst all the shouts for encores, chief guest Ustad Amjad Ali Khan presented the customary floral tributes on behalf of hosts, Indian Council for Cultural Relations. And as Pete thanked the ‘wonderful singing audience,’ he obliged with The Anthem.

We shall overcome, someday

Oh deep in my heart I do believe

We shall overcome someday…

I learnt that song in Bangla in the ‘70s as a ten-year-old while living on a college campus on Beltola Road in Bhawanipore, hearing students sing it with zest, welcoming a group of families from Bangladesh who had fled the war of 1971 and had been sheltered there, courtesy my aunt, the principal of Beltola Basic Training College. Not sure if I grasped its true import then, but as the years passed I realised how my mother and I could well have been among them. Not fleeing war, but finding ourselves without a roof over our heads after life in Agartala took an unexpected turn.

That song, anthem really, would be heard on various occasions in Calcutta; at student marches protesting too few teachers in government colleges, at Left Front political rallies against the bourgeois Press or funnily enough, at residents’ meetings to demand, not eight-hourly, but four-hourly, water supply from Calcutta Corporation and at a Dharamtala sit-in defence of the Bengali’s inalienable right not to work and enforce a state-wide shutdown (bandh). Calcutta still loves a good protest. We had to take it in our stride. Still do.

But Delhi is way different.

Calling Elvis: Conversations with Some of Music’s Greatest: A Personal History, written by Shantanu Datta is published by Speaking Tiger