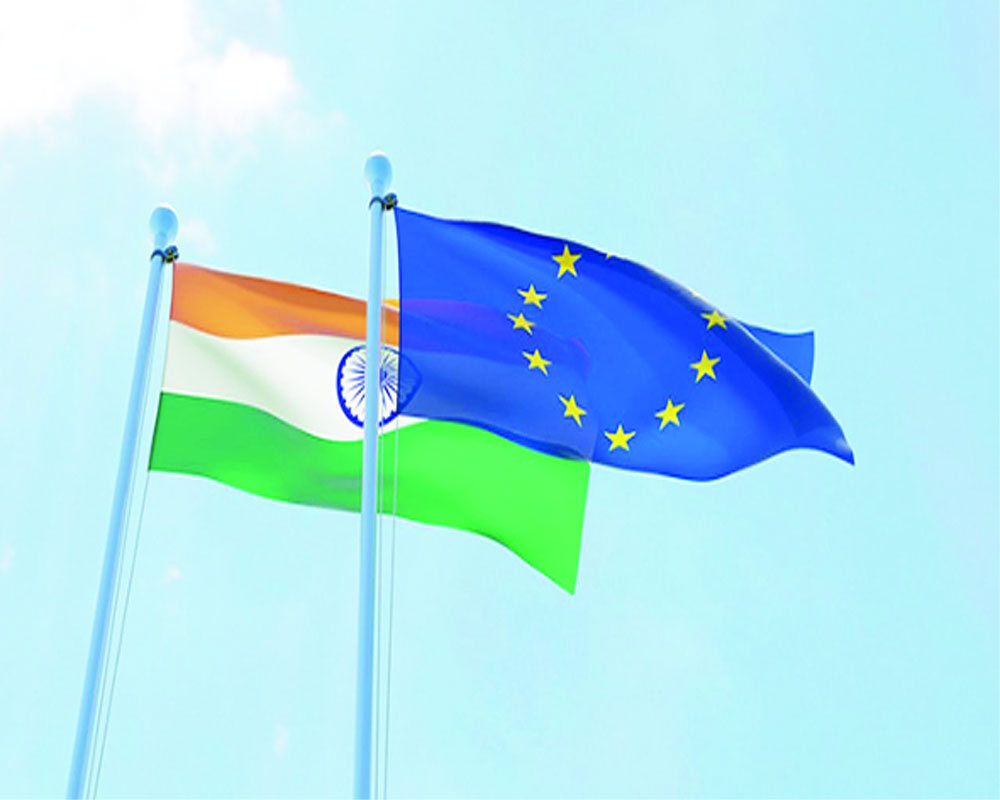 India and EU have opportunities to take their relations to newer heights. Mischievous initiatives which cast aspersions on the CAA or legal changes brought about by the Indian Government in J&K should not be allowed to impact the growth of these ties

Certain anti-CAA resolutions were tabled in the European Parliament based largely on misinformation and mischievous propaganda. It was alleged that the Citizenship (Amendment) Act or the CAA had the potential to create “largest statelessness crisis in the world” even though the legislation only sought to protect the oppressed religious minorities in our neighbouring countries and is in no way directed against Indian Muslims.

In fact, Prime Minister Narendra Modi did clarify in Parliament that the CAA would not have any impact on any Indian citizen of any faith and that it did not harm minority interests given India’s strong commitment to democracy and secular values.

This move was instigated by outgoing Pakistani-origin Member of the European Parliament Shaffaq Mohammed from the UK solely with the intention of causing embarrassment to India. It should be noted that the resolutions adopted by the EU Parliament are non-binding and non-enforceable in nature. Fortunately voting was put off by a few months until after the visit of PM Modi to Brussels in March this year for the scheduled India-EU summit.

This gave time to India to explain in detail the rationale and constitutionality of the CAA which seems to have created a better and more judicious understanding in Europe on this issue. External Affairs Minister S Jaishankar met with his EU counterpart Josep Borell for this purpose. In any event, with the UK’s exit from the EU, many members actively pursuing the resolutions are no longer there and hopefully the EU Parliament would end up taking a more balanced position on the subject. No fresh date has apparently been fixed for the voting because of all-round dislocation due to the Covid-19 pandemic.

Notably, European Commission distanced itself from the move in Parliament and many MEPs did argue that the CAA was an internal matter of India. Lok Sabha Speaker Om Birla too drew attention of the European Parliament that the Act was passed by Indian Parliament following the due process of law which deserved to be shown respect and understanding and that it was inappropriate for a close friend such as EU to do something which would amount to insensitivity and interference in our internal affairs.

Religious persecution suffered by Hindus and Sikhs in Pakistan and Bangladesh has been extensively researched and well documented. Amnesty international has also highlighted the incidents of human rights abuses against them. In Bangladesh, the percentage of Hindus in the country’s population has steadily declined and reduced to the level of just around 6 per cent from nearly 25 per cent at the time of partition in 1947. Situation in Pakistan is naturally much worse where the Hindus have been reduced to a mere 1 per cent of the country’s population.

The horror stories of properties being set on fire, killings, rape, looting, forced conversions and harassment which the Hindus have been subjected to in Bangladesh over the years have been narrated to us first hand in the Antar Rashtriya Sahyog Parishad (ARSP) by numerous delegations of Bangladeshi Hindus. Number of Hindus opted to remain in East Pakistan at the time of partition but their hopes of receiving a fair and equitable treatment there were systematically eroded because of oppression and injustices inflicted on them. This forced many of them to naturally flee to India over last several decades.

Acknowledging this is in no way meant to be a criticism of the present Awami League Government in Bangladesh which remains firmly committed to secular principles and which has traditionally maintained a friendly posture towards India. In fact, on several occasions, Hindus have been targeted by BNP and Jamaat mobs merely because of Hindus’ perceived support for the Awami League.

Issue of persecution of Hindus in Pakistan and Bangladesh has been a subject of extensive debate and reflection in India over the years. In a sense, the problem is seen by many as a legacy of our partition imposed on us by the British on their departure from India and ensuing largescale transfer of population which resulted in enormous loss of lives and dislocation. Even Pt Nehru, the first Prime Minister of India, had expressed deep concern over the condition of Hindus and Sikhs in Pakistan. The CAA is actually meant to partly rectify that festering problem by India accepting some responsibility towards the Hindus and Sikhs left behind in Muslim dominated Pakistan after partition.

Our law has a provision for citizenship by naturalisation but that is not available to illegal immigrants. The CAA changes the law on citizenship by naturalisation by providing immunity to some people (members of persecuted religious minorities in Pakistan, Bangladesh and Afghanistan) from being regarded as “illegal immigrants” and reducing the time required by them to acquire Indian citizenship. Question of who this dispensation would apply to is a sovereign matter solely for India to decide keeping in view its socio-security considerations without any imposition from outside.

A number of issues have been raised by the critics of the CAA about its constitutionality. Arguments being advanced are completely baseless and appear politically motivated designed to wrongfully malign the present Government and tarnish India’s image and reputation globally. Article 15 of the Constitution in the fundamental rights chapter which prohibits any discrimination on the grounds of religion has been quoted by the opponents but it must be noted that this article only applies to citizens and therefore the question of non-citizens seeking non-discrimination under the provisions of this article simply does not arise. Article 14 of the Constitution does indeed provide for equality before the law to all persons residing in India but even there classification for the purpose of legislation is allowed provided such classification is reasonable. It is perfectly alright to make such a dispensation in respect of the persecuted minorities in the three countries in order to provide them the requisite protection and dignity.

India shares an important relationship with European Union and its constituents. Both India and Europe are fully aware of the evolving global geo-political dynamics which has brought India closer to Europe than never before. In a study by Delhi-based Foundation for National Security Research, three European countries viz. France, Germany and UK were placed among India’s top six strategic partners worldwide from the standpoint of defence, security, economic linkages as well as political-diplomatic cooperation.

The EU is also one of India’s largest trading partners with the annual trade and services turnover exceeding $125 billion. We have longstanding shared values and interests based on our commitment to democracy and rules based international order. But despite overall positive sentiments, the relationship has not achieved its full potential. The trade and investment agreement which has been under negotiations since 2007 is yet to be finalised.

There has been some anxiety in Europe as in other parts of the world over China’s predatory investments in strategic assets. China’s hyper-activism, especially in central and east European countries which are now part of EU, seems to be a cause of particular concern to the EU. There have been, for instance, reports of Serbia having prioritised quick Chinese aid over European support in dealing with the spread of Covid -19, even as there was growing anger in Europe over China supplying defective and low-quality masks and other protective gear.

In fact, there appears to be a great deal of suspicion in Europe over Chinese Government having suppressed information about the outbreak of the virus in Wuhan in the early days which may have been responsible for spread of infection and eventual largescale casualties in Europe. Both Merkel and Macron have personally raised serious questions over transparency in China and its handling of the pandemic. There have been reports citing German intelligence sources that Chinese President phoned WHO Director General Tedros Adhanom Ghebreyesus to delay “global warning” over the coronavirus outbreak in January. The pandemic could well lead to a transformational evolution of global geo-political dynamics with western powers acting in much greater concert than at present to check the rise of China. India could benefit at the expense of China in that scenario.

There is also understandable frustration in Europe for having allowed almost complete dependence on China for manufactured goods. This concern is also shared in the USA and other developed countries. Those countries would do everything in their power to push their companies to shift at least some of their manufacturing to the other parts of the world. India seems to be well placed to attract part of the manufacturing taking place in China presently. There are reports of new trade enquiries being directed to Indian manufacturers from Europe in the field of textiles, ceramics, construction tiles and homewares.

Modi’s visit to Brussels for the 15th India-EU summit was scheduled for March this year but had to be postponed due to the outbreak of coronavirus. Even though the summit is supposed to be an annual affair, it could not be scheduled in 2018 and 2019 because of unresolved issues and other difficulties. Both sides now seem intent on holding the summit hopefully this year itself as soon as the conditions normalise. It would provide an opportunity to both India and EU to revive their strategic partnership which was announced in 2004 but which does not seem to have made much headway. India has robust economic and strategic engagement with Germany, France and several other leading member countries of the EU and there is no reason why this solidity should not be reflected in India’s ties with the EU as a whole.

Pending trade and investment issues revolving around negotiations for a free trade agreement which have remained stalled for the last several years can be resolved in the spirit of give and take keeping in view the emerging strategic convergence between them. Market access by India for some European goods, including wines and automobiles, are not insurmountable issues and some accommodation would also seem possible with regard to opportunities for investment in banking insurance and e-commerce sectors. But the EU on its part would do well to let go of its unreasonable insistence on labour and environment issues on which India has strong reservations.

In the changing geo-political realities, India and the EU have new opportunity to take their relations to newer heights. There is a huge potential to double or even triple our trade and investment engagement for the mutual benefit of our people. Mischievous initiatives which cast aspersions on the CAA or legal changes brought about by the Indian Government in J&K should not be allowed to impact the growth of these ties.

(The writer retired from the Indian Foreign Service a few years ago after having served as Indian Ambassador in several countries. He is currently president of well-known NGO Antar Rashtriya Sahyog Parishad)