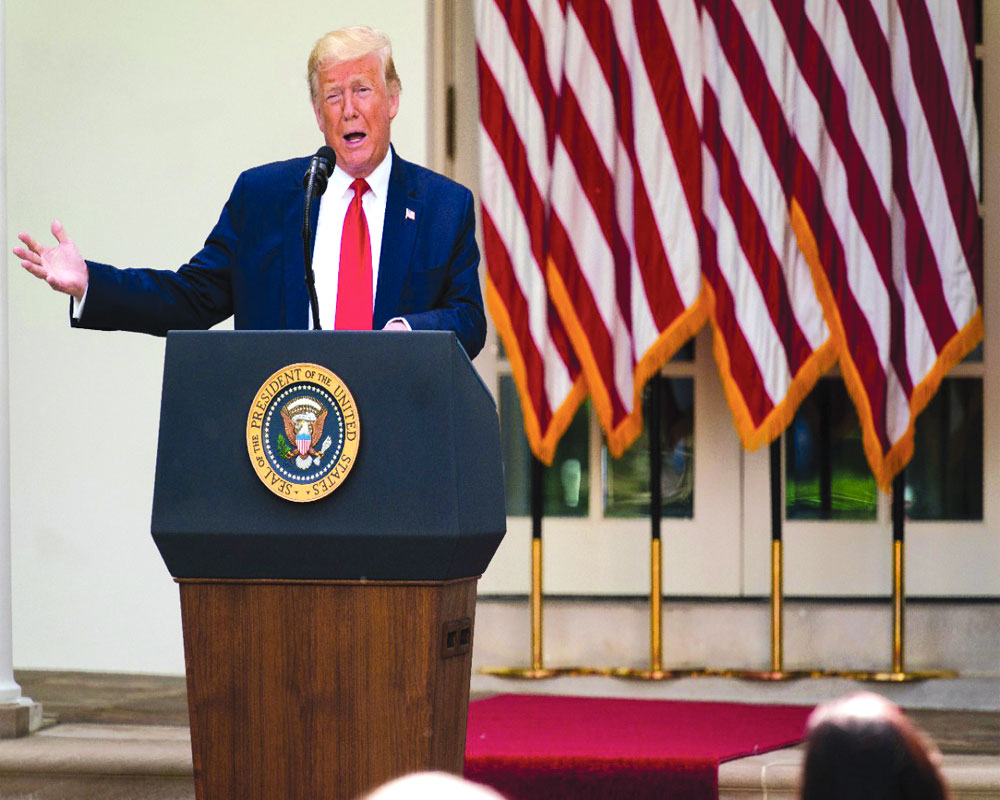 Among many grey areas which will decide the fate of the Democratic and the Republican candidates, the most striking is the desire of the 70 per cent people to go for voting by mail

US President Donald Trump has bumped his way along from one revolutionary decision to another. Not a bumptious fellow he is! President Trump has dedicated all his energies in opposing former US President Obama’s health-care plan and the immigration conundrum and other electoral battleground issues such as the context of the terror outfits and other geo-economic non-State actors and institutions operating in the larger international system. President Trump’s term has been a mixed one with both positive and negative consequences but the positive proclivities of tackling the terror infrastructure and the Chinese threat should go down well with the American electorate in the upcoming Presidential elections.

The Democrat presumptive candidate has hopped on to the popular bandwagon which tarnishes President Trump’s striving at containing the Covid-19 malady through a grand American lockdown along with other palliative measures. Such a partisan way of politicking will not go down well for the Democratic Presidential candidate, Joe Biden, though it can be contended that during the intra-Democratic primaries, none of the candidates posed a viable threat to his nomination for the Democratic Presidential candidature. The current President has to do well to keep his Wasp constituency intact and make further forays into the Red States in United States of America. Despite the reading of the international media, immigration amendments, the judges’ recruitment and his acerbic replies and tweets might not become brickbats for Democrats to beat and chide President Trump with, as it’s a stable constituency of homeland and inward-looking Americans which stays intact with President Trump and the roaring Republicans but the Covid-19 theme has to be cannily dealt with by the Republican electoral machinery and the attendant war-room.

The question that can be raised is that will the US elections be disrupted by the intervention of the Covid-19 outbreak which as a possibility has been negated as a non-probability in one of the policy statements of President Trump while Democratic Presidential candidate Joe Biden has ranted otherwise. Moving away from it, it has to be kept in mind that the Pew Research Centre, a public opinion think tank, reports in one of its releases that the American electorate prefers voting mail, which as a rankling theme by the Opposition in the America’s hustings. The Pew Research Pool contends, “The national survey by Pew Research Center, conducted from April 7 to 12 among 4,917 US adults on the Center’s American Trends Panel, finds broad public support for giving voters the option of voting by mail — and less widespread but growing support for conducting all elections by mail.” The poll further suggests, “Overall, 70 per cent favour allowing any voter to vote by mail if they want to, including 44 per cent who strongly support this policy. About half of the public (52 per cent) favour conducting all elections by mail. The share supporting this proposal has increased 18 percentage points since 2018.”

It can also be surmised that the Asian Americans are the largest growing electorate in the US and have to be wooed by both the political parties, but traditionally this ethnic group has been voting for the democrats since they found their feat in the homeland. The number of Asian American electorate has nearly doubled since the benchmark year of 2000 till the rabid and Covid infected contemporary context in 2020. They make up for a handsome and decisive 5 per cent of the total American electorate and are mostly constituted by the naturalised citizenship and not originally born in the American homeland. Indian-origin denizens are the largest section of the Asian Americans who have at least a bachelor’s degree along with high annual incomes of the order of 105,000 dollars in comparison with other African and Latin American groups which amount to annual incomes much below the 80,000 benchmark for the other bevy of immigrants in the American homeland.

The Vice President’s kitty of votes is formidably constituted by African Americans while other Presidential hopefuls such as Bernie Sanders and Michael Bloomberg had a lesser quantum of African-Americans supporting them. This analysis posits and pits President Trump squarely in the face of the following enjoyed by the Democratic Presidential Candidate, Joe Biden. The rally behind the flag phenomenon has been marred by both President Trump and Joe Biden containing themselves to campaign indoor and to shun the rallies at least for the time being.

The presumptive candidate Joe Biden has already faced a key allegation of debauchery by a Capitol Hill staffer in 1993 and if Richard Nixon had the debilitating tapes and candidate Hillary Clinton in 2016 had her emails serving as their bête noire, it is yet to emerge as to what will prove to the failing of the Democratic Presidential nominee, Joe Biden. One element going in Joe Biden’s favour is his vast Senatorial experience with reams of white papers and other Government and public opinion documents prepared by himself and his Governmental team which posits him undeniably as an insider. The archives of Joe Biden had been transferred to the University of Delaware in 2012 which can serve as a treasure trove of his seat success in the upcoming elections.

The Guardian pinpoints towards the fact that the Democrat Presidential nominee might have information in the closet which might be good staple fare for investigative reporters. The Guardian cites three such grey areas which are of the order of, “His long political career includes the 1991 confirmation hearings for supreme court justice Clarence Thomas, accused of sexual harassment, as well as his support for a 1994 crime law that contributed to mass incarceration. Then there was his 2003 vote authorising the invasion of Iraq, which he has since said he regrets.”

President Trump has made a comeback with his slogan and acts of MAGA, which in the expanded for amounts to, “Make America Great” and will definitely echo in the hearts and minds of the homeland electorate but for the Covid outbreak and an iota of 85,000 deaths as a result of the outbreak. Still, what needs to be rummaged through the idiom that it’s not President Trump but any other President would have had to go through the same firestorm and the outbreak does not categorically poses questions for the Presidential policies, but, for the larger preparedness of the American health infrastructure and attendant resources. And, this is no laughing matter by any context.

With the Chinese dragnet hanging over the American homeland and a review still adrift, President Trump can conveniently pose as a victim of the Wuhan Lab’s ministrations. No nation would want a military conflict at the cusp of these testing times but other predominant issues are up for the tasking. Candidate Joe Biden’s job eradicating Green New deal in the past, his support for NAFTA and TPP and his repeated nonchalance over the fact that the Chinese are responsible to a certain extent for the employment scenario in the American homeland are some of the power keg themes which have been rumbustiously ratcheted up by the Republic election war room.