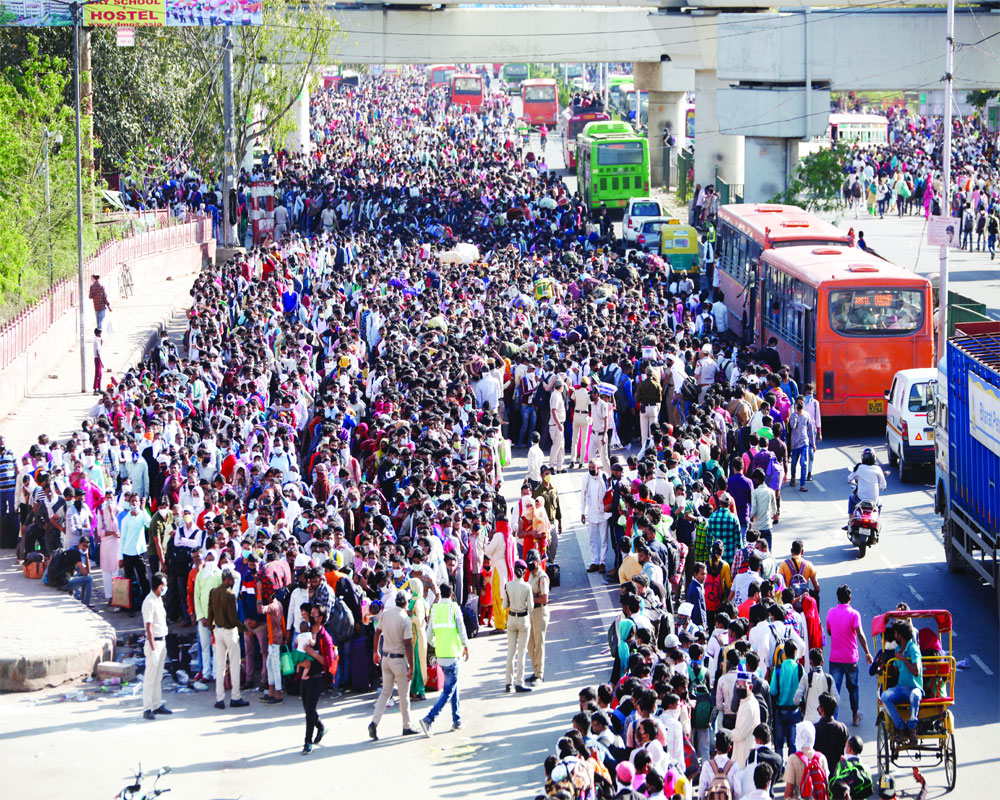 While many view the Covid-19 lockdown as an instance of the efficacy of the administration, the moot point is why the poor people want to run out of cities. This urban middle-class India refuses to see their contradiction. If the poor work so hard in the cities, why must any emergency make them leave the city to return to the village? Isn’t the city their home too?

Published in 2002, poet and writer Dom Moraes in the co-authored book with Sarayu Srivatsa, Out of God’s Oven: Travels in A Fractured Land, wrote: “India had the most brutally stupid middle-class in the world.”

That observation comes to Moraes, a prolific and privileged man, after journeying through and writing about the world in the 1960s and 1970s. He returns in 1980 to India for good. In his remaining 25 years, he produces journalism, non-fiction, travelogues, while struggling through the desertion of his poetic muse that returns late in his life.

Moraes, like VS Naipaul, is dismayed with subcontinental poverty, violence and brutality, while awed by its cultural pasts. Owing to the stark class divide that has arisen due to India’s struggles with tackling Covid-19, his comment has resurfaced online in recent days. In one way, Moraes’ observation reeks of western condescension, but it carries insight that allies with concern: A society’s fiercest critic is often its truest lover.

A mass of the middle-class of this country views the Covid-19 driven lockdown as an instance of the efficacy of the administration. Some members have gone on to question why poor people are walking from cities to the innards of rural India. Many, mainly middle-class people, have defended police excesses like spraying disinfectant on the walkers, or worse, converted the Tablighi Jamaat event in Delhi, into one about Muslim bashing.

There’s proof that the Union Government didn’t take the threat seriously at the time; law enforcement both at the Centre and Delhi State was lax; major shrines of other religions were open. But, none of those seem to matter. Our “Hindu-Muslim” framing is set.

This majority middle-class India lauds the Government when it sends airplanes for countrymen abroad who need to be retrieved to escape the coronavirus. But a hodgepodge quarantine for the unwashed masses is par for the Covid-19 course. It’s easier and cheaper to send airplanes for a few Indians abroad, it’s harder to arrange for transport for thousands of daily wagers in the big cities who belong to villages.

This urban middle-class India refuses to see their contradiction here. If the poor work so hard in the cities, why must any emergency make them leave the city to return to the village? Isn’t the city their home too?

Your essayist departs from the Moraes rapier thrust into the Indian psyche. It was made long back. A part of it is true now. The India that he wrote of is removed from us. In some ways for the good, in many for the worse. A part of today’s Indian middle-class is perhaps more brutal than it’s stupid. It isn’t ready to see the mess that’s the lockdown: There have been 22 documented deaths of migrants while walking back to their villages; many have said they’d die of hunger before the coronavirus kills them. If our poor feel so, what does that mean about our boisterous nationalism?

India’s urban culture has made the poor seem sub-human. Our poor are our invisible people. Almost no big country in the world that battles Covid-19 has witnessed its urban poor walk back to its native place. Our daily-wage workers slave in the cities for decades. Many even have papers that enlist them as domiciled residents. But they are made to feel that they really don’t belong. There is middle class acceptance to their unbelonging. The collective emotion is one of wonder and disconcert: Ah, millions-are-marching to oh no, get-them-back-in-the-sty! Yes, there are middle-class exceptions. But nobody has been able to convince them to stay back, least of all the Union Government. They banged plates saluting our healthcare workers the day the Prime Minister announced the lockdown. No sooner, they set foot for home.

However, it’s essential to steer away from binaries: We may empathise with the urban poor but can’t demonise the majority of India’s urban middle-class. Many sections of today’s collective urban middle-class, wasn’t unlike the poor. Most of them have had tough lives, have seen their ancestors toil. They too came from villages some generations back. Exactly like today’s urban poor, they lived cheek by jowl and were exploited.

One assumes, one’s sufferings, makes one a better human being towards other sufferers. It’s not true. Our middle class has its origins in discord. But they will behave exactly like their class superiors who exploit and may look down on them. That’s why our poor are poor. Poet WH Auden, who encouraged Moraes as a teenaged poet, wrote in his poem “September 1, 1939”: I and the public know/What all schoolchildren learn/Those to whom evil is done/Do evil in return”. This moment sums up subcontinental middle-class mores.