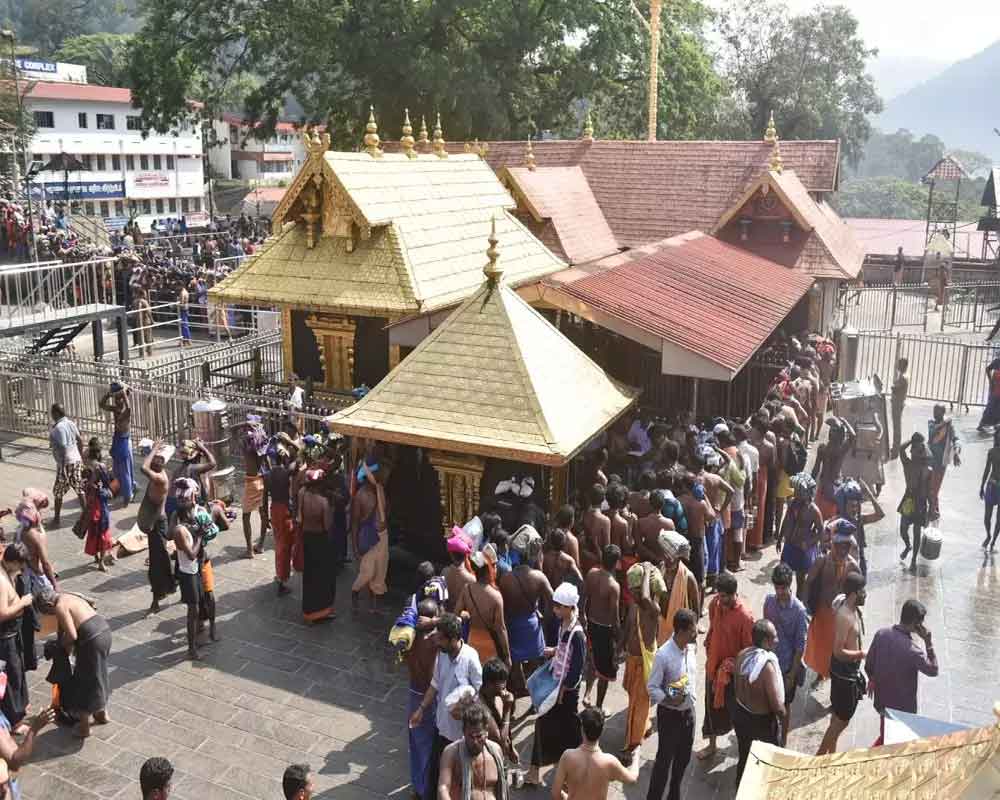 The Supreme Court Monday asked four senior lawyers to convene a meeting on January 17 to decide on the issues to be deliberated by it in the matter relating to discrimination against women in various religions and at religious places including Kerala's Sabarimala Temple.

The top court however made it clear at the outset that it was not considering review pleas in the Sabarimala case.

"We are not hearing review pleas of Sabarimala case. We are considering issues referred to by a 5-judge bench earlier," said a 9-judge Constitution bench, headed by Chief Justice S A Bobde.

The bench said it will consider listing the petitions related to entry of Muslim women into mosques, female genital mutilation in the Dawoodi Bohra Muslim community and barring of Parsi women, married to non-Parsi men, from the holy fire place at Agiary.

It said the apex court Secretary General will coordinate with the four senior advocates, including Solicitor General Tushar Mehta and A M Singhvi, in thrashing out issues to be dealt by it.

The lawyers will decide whether the several issues referred to it by an earlier bench on November 14 last year needed to be reframed, it said.

The meeting should also deal with the time to be allotted to each lawyer for advancing arguments in the case, it added.

The bench said the lawyers should decide as to who will address which issue and fixed the matter for further hearing after three weeks.

"We will grant three weeks time for this (deciding the issues) and we will put this matter after that for hearing," it further said.

The bench said it will not go into the specific details of each case like Sabarimala temple matter and would strictly go by the reference order of November 14 in deciding the scope of judicial intervention in  matters of religious issues.

While referring the matter to a larger bench, the five-judge bench had said that the debate about the constitutional validity of religious practices like bar on entry of women and girls into a place of worship was not limited to the Sabarimala case.

It had said such restrictions are there with regard to entry of Muslim women into mosques and 'dargahs' and Parsi women, married to non-Parsi men, being barred from the holy fire place of an Agiary.

It set out seven questions of law to be examined by the larger bench. They included -- interplay between freedom of religion under Articles 25 and 26 of the Constitution; need to delineate the expression 'constitutional morality'; the extent to which courts can enquire into particular religious practices; meaning of sections of Hindus under Article 25 and whether 'essential religious practices' of denomination or a section thereof are protected under Article 26.

While the five-judge bench unanimously agreed to refer religious issues to a larger bench, it gave a 3:2 split decision on petitions seeking a review of the apex court's September 2018 decision allowing women of all ages to enter the Sabarimala shrine in Kerala.

A majority verdict by then Chief Justice Ranjan Gogoi and Justices A M Khanwilkar and Indu Malhotra decided to keep pending pleas seeking a review of its decision regarding entry of women into the shrine, and said restrictions on women in religious places was not restricted to Sabarimala alone and was prevalent in other religions as well.

The minority verdict by Justices R F Nariman and D Y Chandrachud gave a dissenting view by dismissing all review pleas and directing compliance of its September 28 decision.

By a majority 4:1 verdict, the apex court had lifted the ban that prevented women and girls between the age of 10 and 50 from entering the famous Ayyappa shrine in Kerala and held that the centuries-old Hindu religious practice was illegal and unconstitutional.